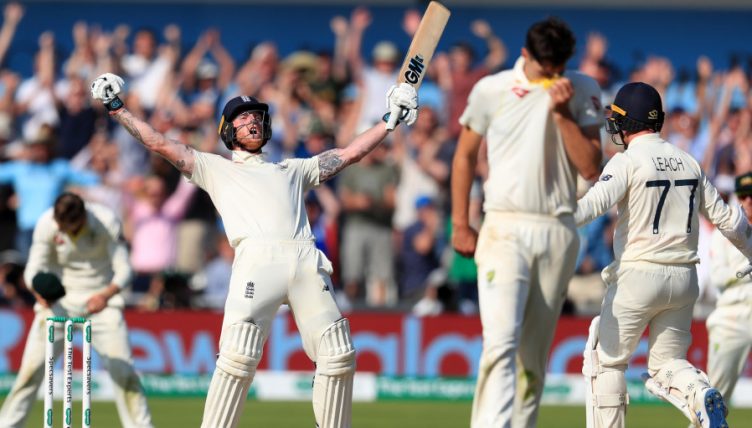 The two greatest performances in the last 50 years of England cricket both happened this summer and both were from Ben Stokes according to a poll. Obviously there’s plenty of recency bias at play here, but he really did have a bonkers summer, didn’t he?

More than 1,000 England cricket fans were surveyed by the Professional Cricketers’ Association and NatWest in honour of the 50th anniversary of the PCA Awards on Wednesday evening.

Stokes’ masterful 135 not out in the third Ashes Test at Headingley, following a backbreaking three for 56, carried England to an improbable one-wicket victory in August and was voted the crowning display of the last 50 years.

Only weeks earlier, Stokes had underpinned England’s triumphant World Cup campaign with an unbeaten 84 in the nerve-shredding final against New Zealand, an innings which took second place on the list.

The Durham all-rounder said: “It will be something I will look back at in 15-20 years’ time and truly understand and appreciate what those two occasions meant and what they did for cricket.”

England’s World Cup win and a 2-2 series draw in the subsequent Ashes across an unforgettable summer have led to more interest in the sport, according to the research.

Fifty-four per cent of female respondents say they were more inclined to follow cricket on television or radio while 46 per cent are likelier to attend a match.

Among 16 to 24-year-olds, 54 per cent show a greater interest in playing the game.

Stokes added: “We did not just want to win the World Cup and the Ashes this summer, we wanted to win over the country in terms of what we do with our cricket.

“We wanted to reach out to new fans, we wanted more people to take up cricket on what we could potentially achieve.

“We have won the World Cup and had a brilliant summer which is what we wanted but I am also 100 per cent convinced we have created new fans, inspired the next generation of England players and got people watching cricket again to a bigger extent than any of us could have imagined.”

Stokes features three times in the top 10 greatest performances, with his savage 258 against South Africa at Cape Town three years ago coming seventh on the list.

Four of the top five displays came in the Ashes, with Andrew Flintoff taking third in the survey following his twin fifties and seven-wicket haul in the dramatic Edgbaston Test in the 2005 series.

Sir Ian Botham’s Headingley masterclass in 1981 ranked fourth while Stuart Broad’s eight for 15 on his home ground of Trent Bridge four years ago rounded off the top five. The list gets proper weird after that. We can just about understand Sir Alastair Cook’s farewell century being sixth on the list even though we probably wouldn’t have it as high as sixth on a list of Alastair Cook’s greatest England moments (Several better ones just off the top of our head: the three Ashes 2010/11 centuries, 294 against India, that time he batted forever in the UAE, when he got hit in the dick and Joe Root laughed, scoring two Test double-hundreds in the space of five months and neither of them counting) but James Anderson at number nine for going past Glenn McGrath’s wicket tally again seems a really odd one. A milestone for sure, but again, not sure it’s even that high on a list of great Anderson moments. Anyway. All good clean fun.

He said: “My favourite individual performance over the last 50 years happened in this year’s Ashes: at Headingley, Ben Stokes became a legend.

“His performance with the bat supersedes any performance that I’ve ever seen in an England shirt.”

PCA president and former England batsman Graham Gooch added: “Great performances have the power to inspire. Ben’s performances at Lord’s and Headingley this summer were nothing short of inspirational.”