Buttler did it as England win nonsense run-fest in Grenada 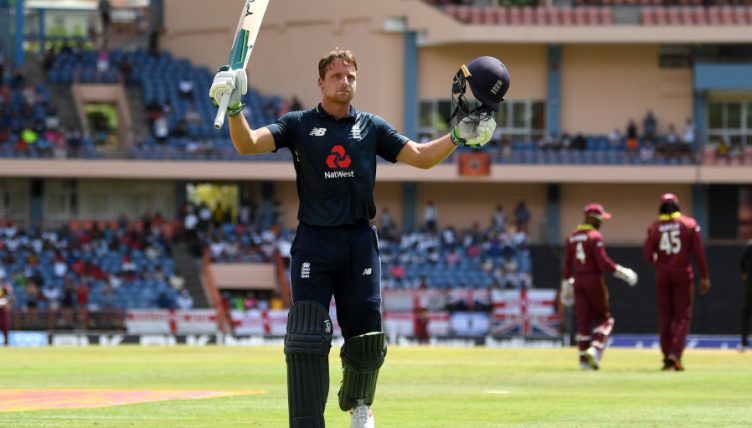 Jos Buttler smashed 150 off 77 balls as England made a ludicrous 418/6 that only proved enough for a 29-run win in a six-laden thriller against West Indies at St George’s.

Over 800 runs were plundered, and over 500 of them in boundaries as 46 sixes rained down on the spectators. Jonny Bairstow (56 off 43) and Alex Hales (82 off 73) got England off to a fine start, but it was Buttler and Eoin Morgan (103 from 88) who really launched England’s total into the stratosphere.

But this ludicrous game had one more ludicrous twist as Morgan boldly turned to his leg-spinner Adil Rashid – who had been utterly demolished by Gayle earlier in the piece – and it proved a masterstroke. Rashid took four wickets in five balls to bring the game to a dramatic conclusion and end with 5/85. It’s the most expensive five-wicket haul in ODI history.

Right, some more records and stats because there were loads. England smacked 24 sixes – breaking the world record set by West Indies in the first game of this series. West Indies nearly took it back – they hit 22 with 14 of them coming from Gayle. His 500th six in international cricket (another record) took him past 10000 ODI runs.

There have been five scores of 400 in ODI cricket since the 2015 World Cup; England have made four of them, and a 399 for good measure.

In the last three years England have made three of the 10 highest ODI totals ever (this one slots in at joint ninth). This was also the ninth time since the 2015 World Cup that two England batsmen have made centuries in the same ODI; it had happened eight times in 44 years of ODI cricket before that.

England have made four ODI centuries in three games, the same number that Ian Bell – their second-highest all-time runscorer in the format – made in his career. Twenty-seven per cent of the ODI centuries ever made by England batsmen have been since the World Cup.

Buttler has now scored four of the nine fastest ODI hundreds ever made by England batsmen. When Buttler first took the record for England’s fastest ODI century in 2014, he knocked a 69-ball effort from Kevin Pietersen into second place. That KP innings now sits 10th on the list.

Better than any of that, though: Buttler hit Sheldon Cottrell for six and then saluted him. Also, Shimron Hetmyer got out second ball for six.

Just a great game of cricket.