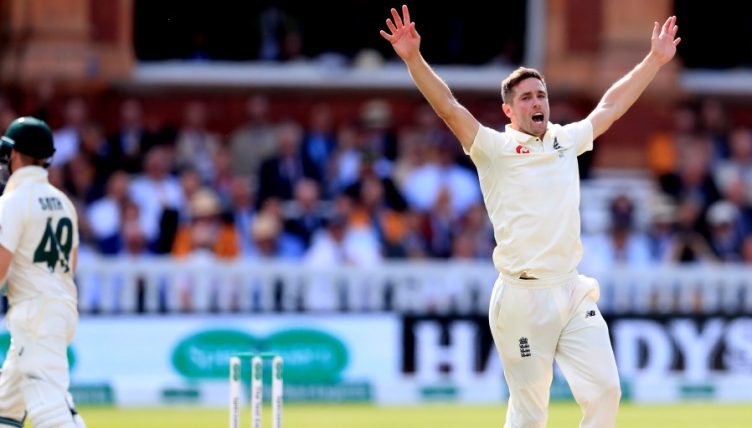 England all-rounder Chris Woakes still believes England can regain parity in the series with a day five victory at Lord’s tomorrow, and marvelled at a hostile and mightily quick spell of fast bowling from fellow seamer Jofra Archer.

On an enthralling day of Test cricket, England closed out the day on 96-4 with a lead of 104, with both teams still believing they have a chance at victory on an extended day five.

The day was characterised by an exhilarating battle waged between Jofra Archer and Steve Smith – with the batsman suffering blows to his forearm and neck respectively in the midst of making 92 runs.

Speaking on the prospect of a potential fifth day England victory to Sky Sports following the close of play, Woakes said: “i still think its evenly matched at the minute, we’re pleased we’re not going to be batting last on that surface.

“We still need to build the lead tomorrow so that we’re safe before we attempt to bowl them out.

“The morning session is always key, but if they get two early wickets they’ll feel like they’re on top and vice versa if we bat well until lunch with two of our best batsmen in the middle – we’ll feel that we can build on that lead and get on top.”

Speaking on the Lord’s surface, Woakes said: “It goes through periods of being nice to bowl on but then when the ball goes soft, you feel like you can get set as a batsman and score some runs on it, so it’s a pretty good pitch for both facets of the game.

“We’ve seen a bit more deterioration now with a bit of variable bounce so hopefully that can benefit us going into the fourth innings.”

The box-office moments of the day were provided by England speedster Jofra Archer who at point delivered a ball at 96.1mph.

“It was serious serious pace wasn’t it,” added Woakes.

“To see the speeds coming up on the board it was no surprise really because it looked seriously quick.

“The crowd, the atmosphere and everything else built it up and obviously bowling at a world class player in Smith made it great to be here.”

There was a scary moment when Smith took a blow to the neck in the afternoon session and promptly retired hurt, but thankfully the Aussie ace was able to return to the middle after undergoing the concussion protocol.

“It’s never nice to see anyone get hit,” said Woakes.

“Ashes cricket is going to be played hard, but at the same time we don’t wish for anyone to be injured by any means. thankfully it looks like Steve’s ok and it just goes to show how special he is with what it took from Jofra to get him out of his bubble.”