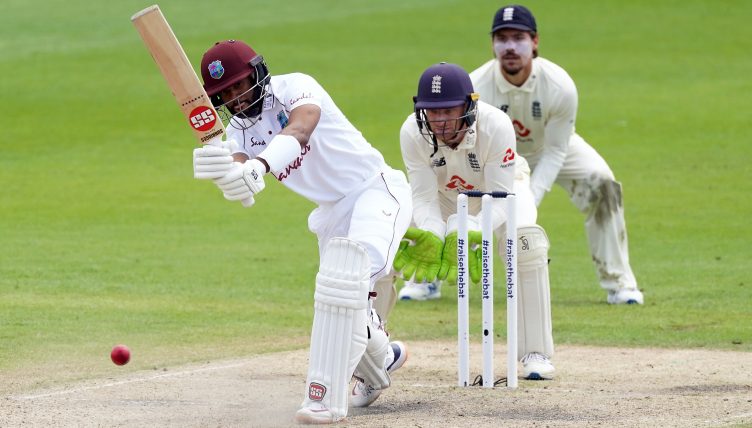 England struggled to make up for lost time on the fourth morning of the second Test, managing just one West Indian wicket in the first session at Emirates Old Trafford.

Saturday’s washout put time pressure on the home side, who made a strong total of 469 for nine declared but need to bowl their opponents out twice in the remaining period and level the #raisethebat series.

The Manchester weather belatedly played along but two hours of toil saw Dom Bess claim the solitary scalp of nightwatchman Alzarri Joseph as the West Indies reached 118 for two.

Kraigg Brathwaite was leading the way on 41 not out, with Shai Hope in good touch for 25no.

The tourists began on 32 for one, with both sides having more than half an eye on the follow-on mark of 270.

Chris Woakes found some useful early swing and should have pocketed Joseph in his second over of the day, taking the shoulder of the bat only for Ben Stokes to spill at second slip as Zak Crawley shaped to move across him.

That was the only chance in the first 45 minutes as the Windies more than doubled their score, aided by 17 in a single over off Stuart Broad.

It took the introduction of Bess to force a change, getting his second ball to grip as Joseph prodded to Ollie Pope at short-leg for a handy 32.

England needed that to be the beginning of a surge but it was more of a false start. Hope was alert to anything loose, scoring all but five of his runs in boundaries, most of them handsome strokes, while Brathwaite batted in typically dogged manner.

England’s frustration was apparent when Root wasted a review on a wildly optimistic caught behind appeal against Brathwaite, and only got worse when Woakes’ next two balls were short, wide and pumped for four.

Dom Sibley accidentally breached the new ‘no saliva’ rule while shining the ball late in the session, the first culprit since the playing conditions were amended. He immediately informed the umpires, who rubbed the ball with sanitising wipes but did not appear to issue a formal warning.