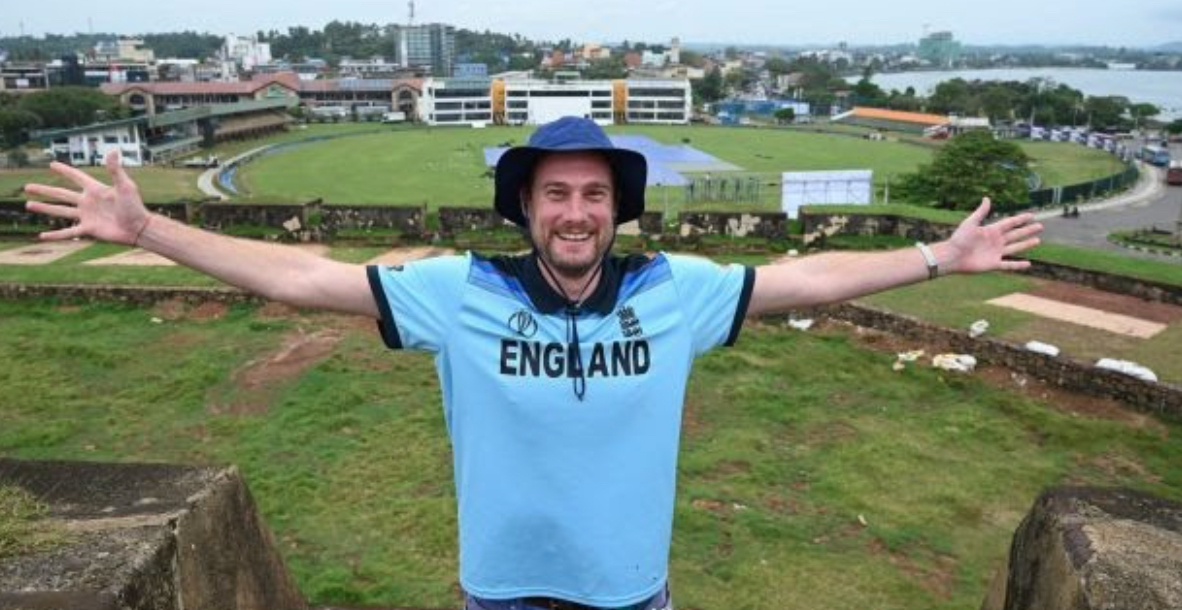 England ‘super fan’ Rob Lewis has pledged to follow the cricket team to India after a “magical” experience in Sri Lanka.

Lewis made the headlines this week after staying on from England’s COVID-hit tour last year to watch Joe Root’s side record a seven-wicket win over the hosts, even landing himself a personal phone call from the Test skipper.

The web designer from Sunbury-on-Thames, who decided to stay on in Sri Lanka back in March last year and wait for England’s return, was rewarded as he watched on from the Galle Fort, solely representing the thousands of England fans watching back home.

And his journey might not end there, with the 37-year-old exploring the possibility of travelling to India to follow England in their upcoming four-Test series, as opposed to returning to lockdown life in the UK.

Speaking exclusively to Cricket Bet India, from his Airbnb digs in Galle, Lewis said: “I’m looking forward to the next Test which starts on Friday and then I’ve got no plans after that. I don’t fancy going back to Tier 5 in the UK.

“England goes to India next month which is behind closed doors so that might be worth thinking about. I’m really tempted, but I think they’re really struggling with COVID. We’ll see. I’ll wait until after the next Test and make a call on it.”

However, if it were to end here, Lewis, a member of the Barmy Army, has no regrets of an amazing 10-month odyssey that culminated in him serenading the England players during the opening Test in Galle and receiving a standing ovation from the players.

“It’s weird how it all turned out,”

“People make me out to be some kind of super fan. It hasn’t exactly been a chore, having to stay in an exotic country for 10 months.

“It has been a long time and I’ve missed family and friends which is the downside, but overall it has been amazing. Everyone back home has been really supportive and have loved it really.

“It has come around really quickly, having always been a distant dream.

“I’ve been busy getting the giant banners designed and printed. I’ve been working with England’s Barmy Army and WECare to set up a donation campaign for the ‘Buy A Pup A Pint Appeal, obviously I am still holding down a full-time job and sorting out accommodation.

“The last few days have just been surreal and a blur and it’s not been helped by the fact we’ve been boozing most nights as well. Going to bed late and getting up early wears any man down.

“I didn’t know if it was going to happen. I didn’t know the rules or if anyone would even be there. There’s obviously a few expats milling around, so there are a few others here to watch England.”

It was worth the wait for Rob, as he was the only ‘away’ fan to witness a fourth away win on the bounce for England, in an impressive win over Sri Lanka. Root made a fourth double century in Test cricket before raising his bat in Rob’s direction and speaking over the phone at the end of the game.

“There isn’t a word to describe it,” he ponders, when trying to sum up THE moment. “It was just super magical. I’ve been in crowds when players turn and salute them and there’s thousands clapping.

“But when it’s just me, he’s doing it directly to just me, it’s just ridiculous when you think about it. It’s mental. It meant a lot, it really did. It made everything and all the hardships I went through worthwhile.

“I can’t think of another time when the captain of a team has come out and called a fan. It’s just amazing and it’s an incredible gesture. He came all the way over to the far side, to give me a personal phone call.

“He was just thanking me for being there and I congratulated him on his double ton and told him he made my day when he saluted me.”

It hasn’t all been plain-sailing, however.

It all started when he boarded a flight bound for the Indian Ocean island country last March, only to learn, as the plane taxied to the runway, that England’s tour had been called off due to the global pandemic.

Instead of jumping on the next flight back, the 37-year-old vowed to remain in Sri Lanka until the England side returned to fulfil the fixtures. The crucial piece of the jig-saw in all of this? His laptop.

“I checked the news and it wasn’t good,” he said, with his phone plugged in and charging, due to the volume of incoming calls and messages. “It was actually one of the last events to be cancelled due to COVID.

“There was always an air of inevitability about it.

“I read up on COVID and realised it was better that I didn’t move around and didn’t fancy getting on a flight with a big visor, so I stayed thinking it would be a month or so (laughs).

“Sri Lanka had a curfew for one or two months and then it opened up, but the situation around the world hasn’t been great, especially back in the UK.

“It was quite an easy decision to stay and I formed the idea that it would be quite funny if I was still here in January, when the proposed return of England would be.

“The biggest factor was that I had my laptop with me and I’ve been able to work remotely.

“I’ve been quite fortunate in that respect. My boss is pretty supportive. He’s a legend himself and is pleased that I’m doing this.

“Seeing events unfold, I didn’t want to come back home because the government has made a bit of a shambles out of COVID, Brexit and everything, so I thought it would be cool to just hang out here.

“It was also nice to experience Sri Lanka when there’s not many tourists around. I’ve been to some of the beaches where normally there’s not enough space to put a towel down and I’ve had the whole beach to myself, which has been quite surreal and quite a unique experience.”

So  every cloud does have a silver lining, and a lack of tourists has allowed Rob to take advantage of reasonably priced accommodation – affording him the luxury of places usually out of his price range. And who would begrudge him that!? His cobbled together itinerary has seen him spend time in Hirikatu, Columbo and Arugam Bay, staying in villas, hostels, Airbnbs and hotels.

What transpired was a personal adventure of a lifetime. He adopted a street dog named pup, started a fundraising campaign, became a DJ under the alter ego DJ Randy Caddick (a nod to former England quick Andy Caddick) and even forged friendships with the Sri Lankan cricketing hierarchy.

Five days graft for the lads

Ten-month wait for a super fan

That’s how he busied himself during a 10-month wait for wickets – a long time between drinks!

“I’m pretty fearless when it comes to travel,” he continued. “I’m happy to just jump on a plane and not have anything booked.

“I did go to the Rugby World Cup final in November 2019, a week after knee surgery and having bought flight tickets drunk. I didn’t even have tickets for the game, I had to sort them out once I was over there. I was on crutches, hobbling around Tokyo.

“This has been the wildest ride so far. So over those 10 months I had some great experiences regardless of the cricket.”

In normal times, fans gather in large numbers on Galle Fort, which overlooks the stadium, where they can watch the match action for free.

This is a story with more plot twists than a cheap garden hose and potentially worthy of big-screen adaptation.

‘It has to be the highlight of my career.’

England are usually backed in large numbers by the Barmy Army, but with fans unable to travel, the national side’s official supporters club has appointed Rob as its correspondent. A job he hasn’t taken lightly, posting vlogs across social media and fulfilling his new-found media duties; always hitting the right notes in his various interviews.

And that brings us nicely to Jerusalem – a staple of British culture – written by William Blake and composed by William Parry in 1916. This has been the official hymn of the England cricket team since 2003 – played before each and every match.

But this outpouring of patriotic pride has never been sung with such gusto and poignance as it was on Day 1 of England v Sri Lanka, Galle, 2021.

I may of got kicked off the fort. They may of taken my banners down. I may of missed half the days play. I may of shouted Jerusalem rather than sing it. But to belt it out to @englandcricket on my own from the fort after 10 months was probably the most magical moment of my life. pic.twitter.com/04JGQZDij1

“It had been playing around in my head that I could be the only person singing Jerusalem on the first morning,” he said. “When it came around it was really weird, it just felt like a moment of destiny.

“The wind was blowing into my face and we’re 50 yards from the boundary up on the fort, so I just tried to project my voice as much as I can and it sounded pretty terrible. But I’ve no regrets and did my best.

“It was magic that first morning, it really was. And I’ve really loved signing Jerusalem every morning since, apart from day two when I couldn’t get up there.”

Anyway, here it is. 10 months of dreaming for this moment. @TheBarmyArmy @englandcricket pic.twitter.com/CeY0P8bMn7

Having endured the arduous two-hour task of unfurling his banners on Galle Fort and belting out the famous hymn, his serling efforts were met with some initial resistance. But, like all good stories, this one had a happy ending.

Much of it comes from one man’s determination and ingenuity.

“I spent two days walking around, looking through bars on gates, I went to the police station to ask for permission and was sent round and round in circles. One gate would send me to another and so on.

“I decided to take matters into my own hands and put on a hi-vis and went on a wide angle on to the Fort, right round the side, dressed as a construction worker.

“I actually got caught by the police and they asked why I was wearing the gear and I said that ‘I’m on a work site, so safety first!’ They did have a good laugh at that. They said I can then watch for half an hour but I ended up watching the whole evening session of Day One.

“I went up on Day Two to sing Jerusalem and was kicked off straight away, before a ball had even been bowled. That seemed pretty definite, they told me not to come back. I watched the first session through bars, a fence, the second from a cafe nearby, but I could have been anywhere in the world watching it. That’s when I managed to get on the media list and went back up the Fort on Day Two, but it was cut short by rain.

“When I returned the same policeman was really nice. He was like; ‘ah Mr Lewis, welcome, please, on you go.’ It was a complete reversal of their attitude. I guess my perseverance paid off.

“I was fully aware that being the only member of the Barmy Army, all eyes would be on me. I’m a nice bloke anyway and lots of locals come up and say hello and ask for a selfie, which is pretty crazy.”

If one was to attempt to define the proverb ‘patience is a virtue’ then you need look no further than Rob Lewis’ exploits on the Fort of Galle.