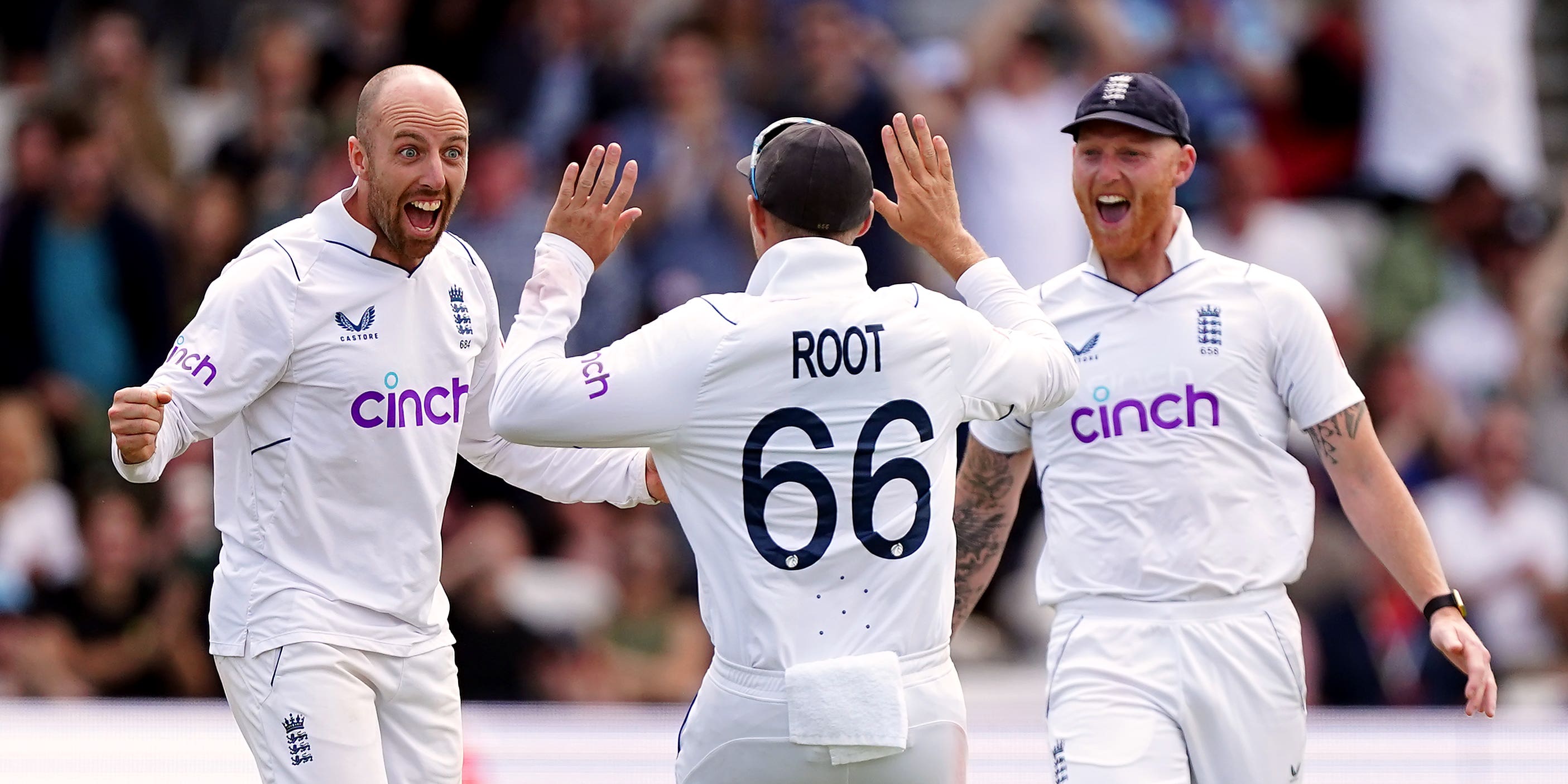 Jack Leach completed a career-best 10-wicket match at Headingley to set England on course for another fearless run chase and a series whitewash over New Zealand.

The left-arm spinner followed up his first-innings haul of five for 100 with even better figures of five for 66 as New Zealand set their hosts a target of 296 on day four of the third and final LV= Insurance Test.

Ordinarily that would look like a huge ask but, having chased down 277 at Lord’s and 299 at Trent Bridge, England went about their business with a flourish to reach 183 for two at stumps.

Ollie Pope stroked a fluent 81 not out as he continued to grow into his new role at number three and Joe Root was at his unflappable best with an unbeaten 55. A sense of inevitability settled over proceedings as they piled on 132 together, leaving an apparent victory lap on day five.

Yorkshire have thrown their doors open to spectators for free, replicating Nottinghamshire’s successful initiative last week, and will hope to fill the stands for a triumphant conclusion to a gripping month-long contest.

But for Leach, the trip to Leeds has already been a success. Best remembered in these parts for his cult classic one not out in the Ashes Test of 2019, he now has even better memories to cherish.

A very different story appeared to be taking shape when Daryl Mitchell and Tom Blundell spent a wicketless morning session piecing together their fourth century stand of the trip.

England started the day in buoyant mood after taking four wickets on the third evening, bringing Mitchell and Blundell together with a fragile lead of 137.

But the pair have tapped into something special in the past few weeks, totting up partnerships worth 236, 195 and 120. It was, then, no shock to see them chalk up another 113.

England were quiet, failing to muster a single chance in almost three hours of soberly attritional cricket as the dogged Kiwi duo blunted the bowlers with relish.

It all changed at 2.25pm when Matthew Potts, the rookie seamer whose stock appears to rise with every spell, barged the door ajar.

Having seen an lbw decision against Blundell (88no) turned down off the first ball of his over, he proved his character by dusting himself down, brushing off the disappointment and pinning Mitchell clean in front for 56 just four balls later.

Mitchell, for once bested, departed with a series tally of 538 and an average of 107.6.

New Zealand had been comfortable at 243 ahead with five wickets in hand, but Potts’ perseverance broke the spell. Leach happily picked up the baton, mopping up the tail in clinical fashion.

Michael Bracewell holed out to deep midwicket looking to clear the ropes, Tim Southee was cleaned up by an arm ball that skidded through him and Neil Wagner was caught behind in unusual fashion by substitute wicketkeeper Sam Billings.

The Kent gloveman, who made an emergency journey north due to a case of Covid-19 for Ben Foakes, was unable to gather the edge cleanly but did snare the ball between his legs before pouching it as it dropped down.

Leach finished the job when he clean bowled number 11 Trent Boult on the charge, keeping England’s challenge just below the 300 mark and becoming the first English spinner to take 10 wickets at home since Graeme Swann in 2013.

Despite having an abundance of time to get the runs, England’s fourth innings began in predictably eventful fashion. Alex Lees was run out in the fifth over, falling victim to Zak Crawley’s jittery pursuit of a single and some smart tag-team work in the field from Kane Williamson and Boult.

Crawley, in desperate need of a score, was oozing nervous energy in the opening skirmishes but threw off the shackles with four boundaries in an over off Boult.

England passed 50 in just 12 overs but that was the end of the road for Crawley, who lunged at an off-break from Bracewell and lobbed a catch to cover for an indifferent 25.

In their eagerness to stay on top, New Zealand squandered two DRS reviews in two balls – both horribly misjudged lbw shouts against Root.

Soon the ball was travelling again, with Bracewell milked for a handful boundaries. Pope was threading his drives through the off-side at will and Root cheerily handing out some of his sweep variations.

For the second game in a row Root left jaws on the floor with an act of remarkable improvisation, shovelling the combative Wagner over third man for six with a reverse scoop.

The runs kept flowing at a rate more suited to ODIs, with twin half-centuries for Pope and Root as England hurtled along at 4.69 an over.