Home Countries England England: Outfought and outclassed with another series defeat on the cards

England: Outfought and outclassed with another series defeat on the cards 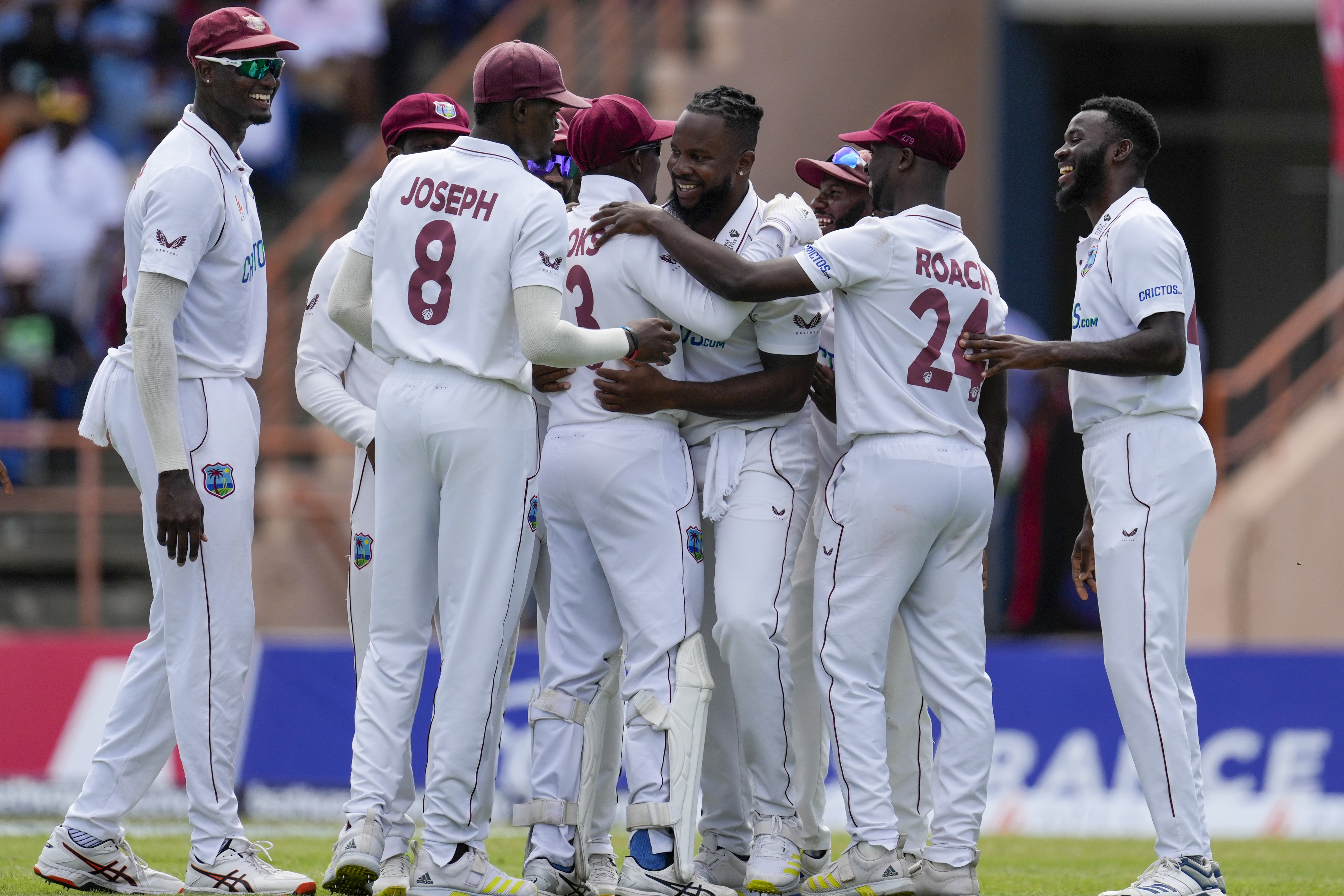 England’s woeful winter was hurtling towards another damaging defeat as a miserable third day in Grenada left Joe Root and his side with nowhere to turn against the West Indies.

Victory in this series decider would have allowed England to begin putting their Ashes debacle behind them and given Root a much-needed boost of authority but, with the game up for grabs, they were outfought and outclassed.

In a stadium teeming with home fans, who finally outnumbered the travelling contingent and turned the ground into a wall of steel drums and blaring horns, England slunk into the shadows.

The tourists were vapid and vanilla with the ball as Josh Da Silva’s excellent 100 not out turned a slender lead of 28 into a commanding one of 93, then weak-kneed and wobbly in their reply as they lurched to 103 for eight.

Medium-pacer Kyle Mayers claimed figures of five for nine as he became the latest bowler to feast on a team whose tendency to wilt under pressure is becoming its unwanted hallmark.

A crushing defeat on the fourth morning appears all but inevitable, with Chris Woakes and day one’s plucky last-wicket pairing of Jack Leach and Saqib Mahmood all that remains to bolster their 10-run advantage.

Things had been finely poised at the start of play, with the West Indies narrowly in front with just two wickets in hand. But Trinidadian wicketkeeper Da Silva carved out a gritty, unbeaten – and eventually tearful – century as England’s underwhelming attack laboured away in insipid fashion.

Da Silva worked hard for every run, playing through the pain of a badly hurt hand and pairing his own designs on a maiden Test hundred with a meticulous plan to protect number 11 Jayden Seales.

They shared a morale-sapping stand of 52 to see their side to 297, a stunning fightback from 95 for six.

England up against it

Da Silva provided a masterful blueprint for how to manage these conditions and it was one England should have been taking extensive notes from. Instead they served up yet another shocker of a second innings.

With calm heads required they wilted, just as they had in Melbourne and Hobart where they were skittled for 68 and 124 respectively.

Having watched Da Silva run them into the ground in a clear-minded knock comprising almost six hours at the crease, they tumbled to 39 for four in less than 17 overs.

Zak Crawley was first to go for a flighty eight, leaning into a now familiar failing as he followed two sweetly-driven fours with an utterly predictable nick to slip.

The Kent player is a real talent, and offered a reminder of that with a neat century in Antigua, but too often places a pitifully small price on his scalp.

The next three all fell to Mayers, whose natural pace of around 76mph and ability to nip the ball around off the seam would have probably seen him confined to a life in county cricket had he been English.

He took care of Root for the second innings in a row, carving a tempter outside off stump straight to slip. This was a skipper in bad need of a captain’s innings but he was on his way for a wholly unsatisfactory five.

Dan Lawrence and Ben Stokes were both dismissed attempting to leave the ball, as Mayers’ subtle skillset wreaked havoc.

Lawrence lost his off stump to one that tailed in to an unguarded off stump and Stokes, who had barracked Da Silva for scoring too slowly, toed one through to the gloveman as he tried to withdraw from one that followed him.

Between them Crawley, Root, Lawrence and Stokes have managed just 34 runs in eight innings in this game, a damning tally.

England were a wreck at tea, but found some temporary solace in a virtually shotless stand of 41 between Alex Lees and Jonny Bairstow.

The Durham opener had seen all four wickets tumble, digging in sternly with a couple of lives along the way.

They held off the charge for almost 24 overs but barely laid a glove on their opponents, meaning England were still 13 adrift when Bairstow gave in to Da Silva’s needling behind the stumps and under-edged an attempted pull straight to him.

With the period of relative calm shattered, Ben Foakes was mindlessly run out taking on Mayers’ golden arm and failing to make his ground with a dive. The West Indies sprinted to the boundary rope to offer high fives, hardly able to believe their good fortune.

Lees nudged England back into the lead to ensure there would be some form of fourth innings but almost immediately received a shooter as a reward, clean bowled after 132 balls and 31 runs.

That was Mayers’ fourth wicket and he promptly put the bow on his five-for, Craig Overton slashing tamely to second slip.

A rousing three-day win was hovering into view but England’s agony was destined to go on, however briefly.