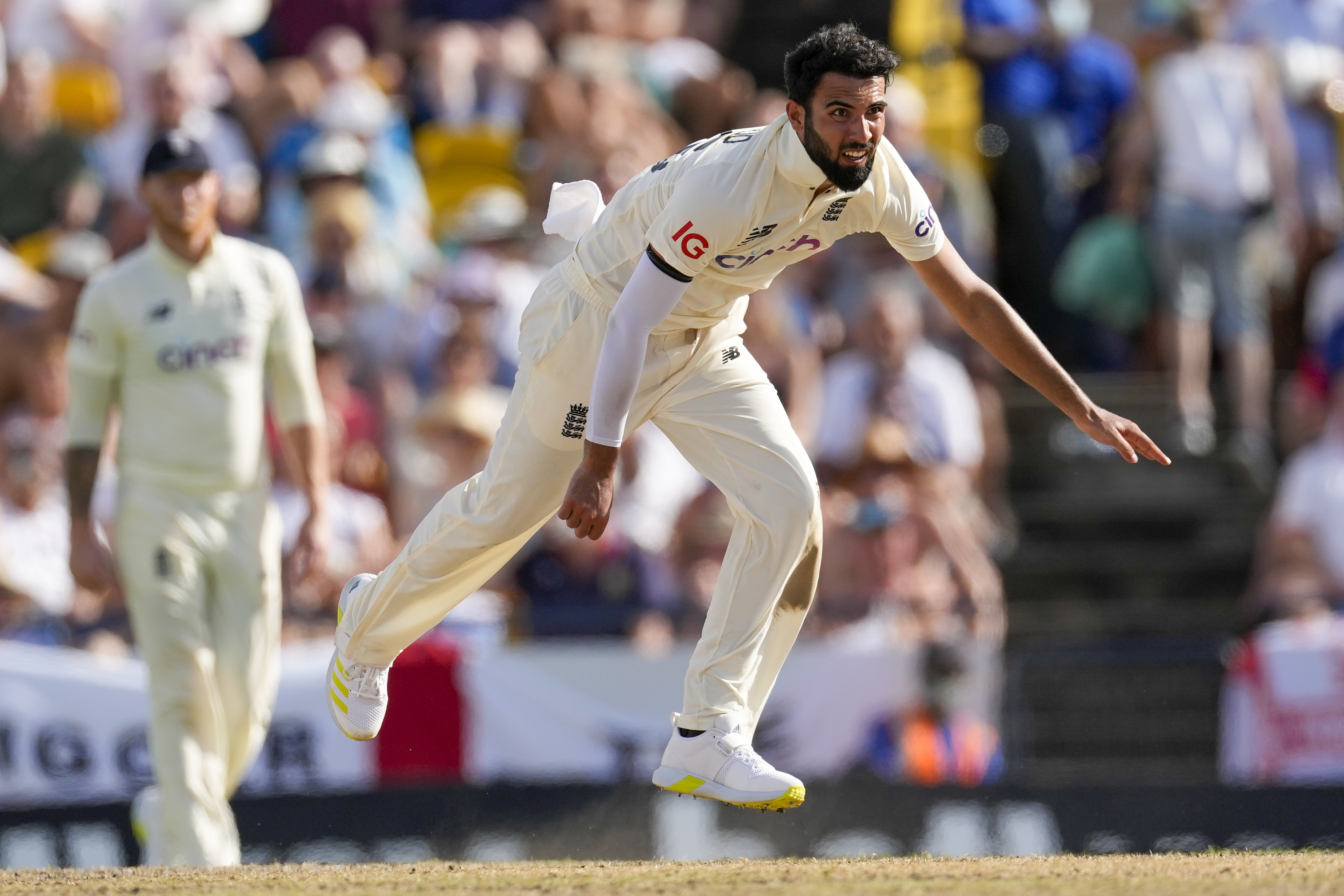 Saqib Mahmood saw his first Test wicket struck down for a no-ball as England met a wall of resistance on day three of the second Test against the West Indies in Barbados.

The tourists managed just three wickets in three gruelling sessions at the Kensington Oval as the same placid pitch that allowed them to rack up 507 came back to bite their bowlers.

West Indies skipper Kraigg Brathwaite offered an eight-hour blockade as he made 109 not out in 337 balls, while Jermaine Blackwood’s 102 helped the hosts close on 288 for four.

A maiden scalp for Lancashire quick Saqib, who saw fellow debutant Matthew Fisher open his account on the second evening, would have provided a welcome release for English frustrations and the moment looked to have come when he squeezed a wonderful yorker through Blackwood’s defences on 65.

The 25-year-old was mobbed by his team-mates only for their celebrations to be cut short by umpire Nigel Duguid, who stretched out his right arm to call Saqib for over-stepping.

It was a crushing moment for the seamer, who was midway through his 14th over of a fruitless search for success, and for the whole England side who spent almost 68 overs watching a fourth-wicket stand of 183 before Dan Lawrence’s part-time spin did the trick.

England over the line

No-balls have become a familiar frustration in recent years, with Saqib joining Ben Stokes, Mark Wood, Tom Curran and Mason Crane in having their first Test wicket scrubbed from the records. Stokes, Ollie Robinson and Chris Woakes also paid for sloppy footwork during this winter’s Ashes.

With two full days left there is still plenty of time for a positive result to be conjured but if conditions remain anything like as benign as this, a repeat of last week’s Antiguan stalemate appears a safer bet.

England started brightly, dismissing Shamarh Brooks and Nkrumah Bonner in the morning session but spurned the chance of a third which may have just tipped the balance in their favour. Blackwood was still on nought when he was hit in front of leg stump by one that kept a fraction low from Ben Stokes.

He turned on his heels immediately, seemingly waving away any discussion about a DRS referral only for the dreaded three reds to show up on ball-tracking. On a flat surface like this, momentary decisions can weigh heavy.

Jack Leach got England up and running in the first half-hour, settling into a searching spell that asked plenty of good questions only to strike with a rare loose ball. Brooks sensed a chance to score off a short one but leant back and sliced a catch to backward point. That was Leach’s only wicket in 35 overs while Saqib, Fisher and Woakes chipped away fruitlessly in a tiring scrap.

With Brathwaite looking in assured touch and Bonner fresh from facing 493 balls for one dismissal in the first Test, the onus was on England to find another. Bonner scored the first boundaries of the day in the 14th over but his hopes of another lengthy stay were ended by Stokes, who pogoed up and down in Tiggerish fashion after winning an lbw.

The Jamaican was perhaps unlucky not to be spared, with a hint of an inside edge, but England’s luck levelled out when Stokes’ misjudgement saved Blackwood. A lunch score of 114 for three kept the away side firmly in the contest, but things would only get harder from there.

The afternoon was a sapping affair, low of entertainment and even lower on clear-cut chances. Brathwaite and Blackwood soaked up whatever was sent their way, clear-mindedly topping up their scores with barely any errors.

The Barmy Army were admirably consistent as they reeled through their songbook but there was little to focus their attention in the middle.

The second new ball brought extra bounce and carry but nothing of note until Saqib blasted the base of Blackwood’s stumps with a toe-cruncher. It would have been a perfect calling card to kick-off his Test career but he paid the price for not looking after the details.

Energy levels waned as Brathwaite nudged his way to three figures, a ninth hundred overall but his first on home soil in Bridgetown. Blackwood followed in 207 balls, 71 quicker, before a late twirl for Lawrence finally broke them up.

Blackwood padded up to a ball that spun in and was pinned in front of middle, a second success of the series for Lawrence’s left-field tweakers.