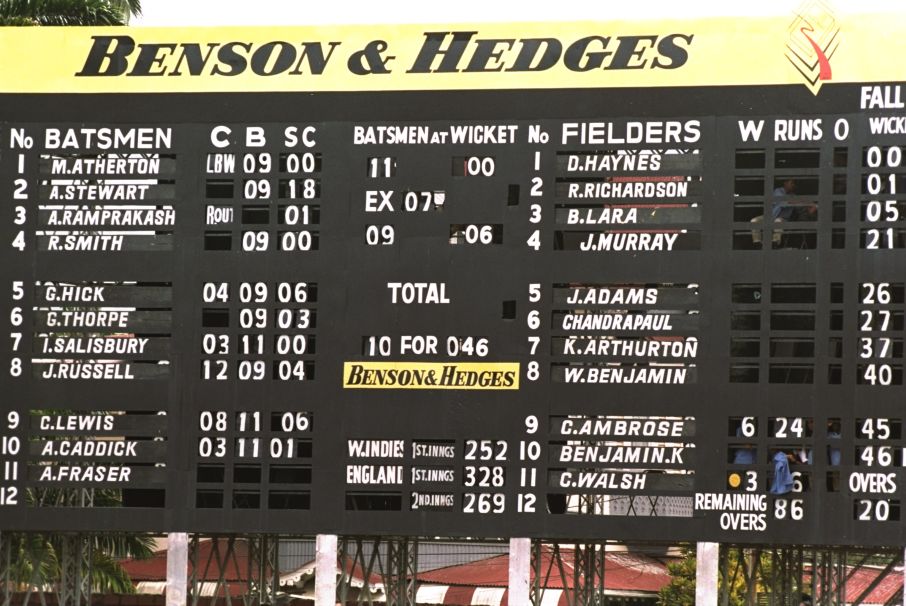 We’ve taken a look at England’s record in the West Indies ahead of the Test series. And it’s really, really bad.

Studies have shown that a good 23% of all discussion and debate about cricket now involves beard-stroking concern about the state of West Indies cricket, lamenting the decline of a once-feared team and usually ending with the unchallenged assertion that ‘cricket needs a strong West Indies’.

England, though, have an absolutely miserable record in the Caribbean, and it’s one that has continued long past the Windies’ 1980s heyday and through a period where England have often been quite good.

Since 1968, England have won precisely one Test series in the West Indies. Since that sole success 15 years ago for a team that was well on its way to becoming the 2005 Ashes winners, England have won in South Africa (twice), Australia, India, New Zealand, Sri Lanka and Bangladesh. The only country England have played away from home without success more recently than West Indies is Pakistan.

2014/15: West Indies 1-1 England (three Tests)
Four years ago, but this already seems like a series from another era. Jonathan Trott opened the batting for England. The drawn first Test had hundreds from Ian Bell and Gary Ballance. Shivnarine Chanderpaul was playing. Marlon Samuels saluted Ben Stokes.

England won the second Test at a canter on the back of Joe Root’s 182 not out in the first innings. Stuart Broad took four wickets in the Windies’ first innings, James Anderson did so in the second. A potentially ticklish 143-run target was chased down with ease by Alastair Cook and Ballance for a nine-wicket win.

The West Indies, though, hit back to win the third Test after blitzing England for 123 in Barbados, apparently belatedly motivated by incoming ECB chairman Colin Graves bumblingly if not inaccurately calling them ‘mediocre’ before the series begun. Better late than never. 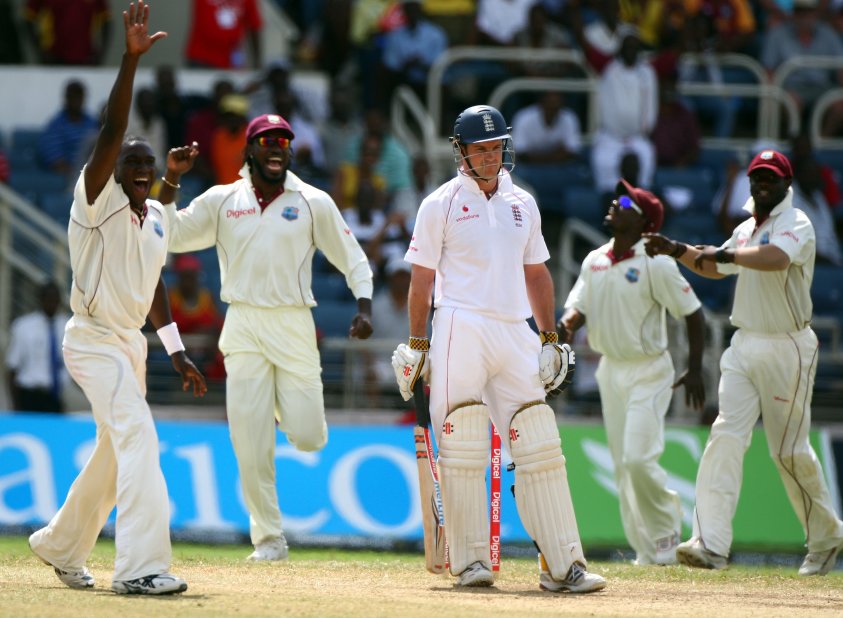 2008/09: West Indies 1-0 England (five Tests)
Just a dreadful, dreadful series leavened only slightly by some dark humour. England managed to get themselves bowled out for 51 to lose the first Test by an innings and then spent the rest of the series failing to get back on level terms. There were five drawn Test matches in the whole of 2018; a decade ago, England and West Indies managed to draw four in a row.

In fairness, one of those matches lasted only 10 balls, abandoned in farce at the Sir Viv Richards Stadium to the embarrassment of all when sandy conditions underfoot made it literally impossible for the bowlers to run in.

West Indies survived nine wickets down at a hastily arranged replacement Test at the Recreation Ground. England scored 600 at the Kensington Oval only for West Indies to respond with 749/9 thanks to 291 from Ramneresh Sarwan and 166 from Dinesh Ramdin.

Having been one wicket short of victory in the third Test, England were two shy in the fifth as Andrew Strauss – thrown a captaincy hospital pass after the Kevin Pietersen/Peter Moores unpleasantness – came under fire for conservative declarations.

After the bleak comedy of England’s collapse in the first Test and the abandonment of the second, the only real entertainment on offer for the rest of the series came via a hilariously inadequate prototype quasi-DRS that forbade the use of Hawk-Eye’s predictive element and thus turned all lbw decisions into the purest essence of banter.

2003/04: West Indies 0-3 England (four Tests)
The birthplace of the 2005 Ashes winners as Michael Vaughan’s team swept to victory on the back of the bowling attack that would so terrorise Australia 18 months later. England followed this series with seven straight wins in the 2004 home summer and victory in South Africa the following winter.

They were really good. The first Test in Jamaica was in the balance when England led by 28 on first innings. Twenty-five overs it was not in the balance; on a pitch with pace and bounce, Steve Harmison took 7/12 in 12.3 overs of searing, unplayable fast bowling. By the end of the carnage, England had eight slips and a short-leg, so utter and total was Harmison’s control. 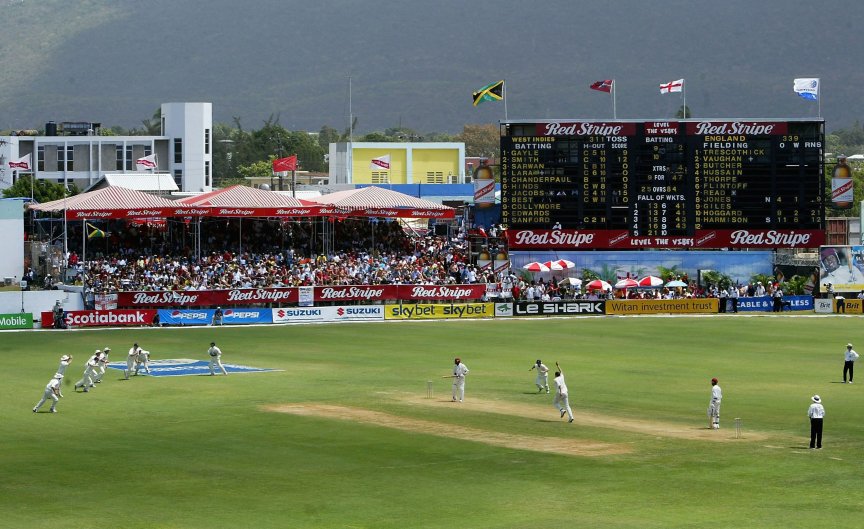 Harmison took 6/61 in the second Test – bowling with even greater menace and pace than he had in Jamaica by some accounts – to set up victory in Trinidad, while Barbados was a marginally less dramatic reboot of Jamaica. After another pair of even-stevens first innings, West Indies managed to double their effort from Sabina Park. They made 94 this time, and England won by eight wickets.

Brian Lara had the series’ last laugh, reclaiming the world-record score he briefly lost to Matthew Hayden by casually plundering an unbeaten 400 at the Antigua Recreation Ground for a giggle.

1997/98: West Indies 3-1 England (six Tests)
Another series best remembered now for a high-profile abandonment after a corrugated roof of a pitch at Sabina Park saw England reduced to 17/3 by Ambrose and Walsh before the umpires called it off with a bruised and battered Alec Stewart on the bravest nine not out the game has ever seen.

The next two Tests were stone-cold classics in Trinidad, split 1-1, both won by three wickets with the biggest score of the match coming in the run-chase. First West Indies sneaked to their 282-run target on the back of Carl Hooper’s 94 not out before Stewart’s 83 got England home a week later.

West Indies took charge from there, though, slapping England down by 242 runs in Bourda and an innings in Antigua either side of a high-scoring draw in Barbados notable mainly for Mark Ramprakash’s maiden Test century.

The series was wrapped up in three Tests, with victories by eight wickets, an innings and 44 runs, and 147 runs, that last victory a famous success at the Queen’s Park Oval as England’s pursuit of just 194 for victory came ludicrously, viscerally and thrillingly unstuck on the fourth evening when Curtly Ambrose reduced them to 40/8 on their way to 46 all out.

England landed a blow of their own, though, thrashing Richie Richardson’s side by 208 runs in Barbados to inflict West Indies’ first defeat at the Kensington Oval since 1934.

Then it was on to the Antigua Recreation Ground, where, as everyone remembers, both teams made 593 in their first innings. But what a lot of people don’t remember is that Brian Lara scored 375 of those runs.

1989/90: West Indies 2-1 England (five Tests)
England stunned a truly wonderful West Indies side with a thumping nine-wicket win in the first Test at Sabina Park, Angus Fraser taking 5/28 as the hosts were routed for 164 before Allan Lamb’s 132 secured a 200-run first-innings lead.

Gladstone Small and Devon Malcolm took four wickets each to leave England chasing just 41, which they did without fuss. The second Test in Guyana was abandoned without so much as a toss because of rain, and the third Test in Trinidad ended in a frustrating draw with England 31 runs short of going two up with two to play.

West Indies then crushed England by 164 runs at their Barbados fortress before completing the come-from-behind win with an innings victory in Antigua.

1985/86: West Indies 5-0 England (five Tests)
Brutal. Absolutely brutal. The narrowest margin of victory was seven wickets when John Emburey managed to nip a couple out in a chase of 95 in Trinidad.

The other games were won by 10 wickets, an innings and 30 runs, 10 wickets again, and 240 runs. It reads like a recent Ashes tour.