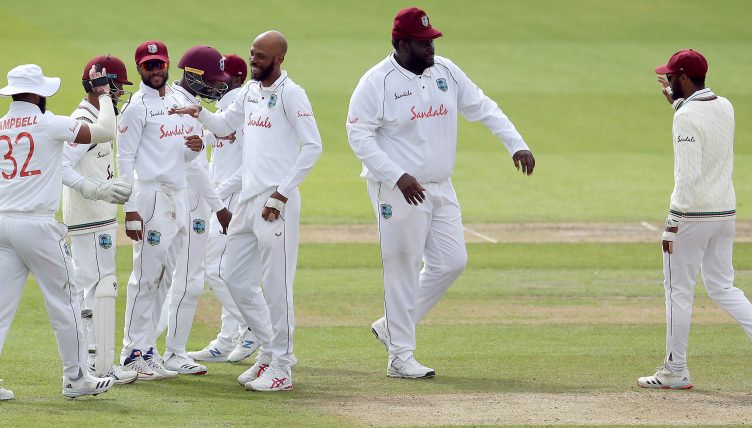 England were struggling to justify gambling with their batting line-up after reaching 131 for four at tea on the first day of series decider against the West Indies.

With star all-rounder Ben Stokes not fit enough to play a full part with the ball in the third Test at Emirates Old Trafford, England made the brave decision to drop batsman Zak Crawley in favour of an extra bowler.

That allowed Joe Root to field a five-strong attack featuring the returning Jofra Archer and James Anderson but also heaped extra responsibility on the top six when Jason Holder sent the hosts in.

Rory Burns did his best to pave the way with a hard fought 57 but his departure, courtesy of a brilliant one-handed catch by Rahkeem Cornwall, left the hosts in need of a major score from Ollie Pope (24no) or Jos Buttler.

There was disappointment for last week’s centurions, Dom Sibley making a duck and Stokes bowled for 20, while captain Root was run out for 17.

Having occupied the crease for over nine hours in the second Test, Sibley’s follow-up knock lasted just five balls as Kemar Roach picked him off lbw with a full, straight delivery.

That brought Root, who has spoken of his preference for batting at four on several occasions, to the crease earlier than he would have liked but he successfully absorbed some of the heat, spending 20 overs with Burns as the pair put on 46.

With paceman Shannon Gabriel heading off the field for treatment after abandoning his fourth over, there was a chance for England to get on top but instead they were undermined in pursuit of a quick single.

Both batsman set off when Burns tapped Cornwall to short third man, but a rapid pick-up and release from Roston Chase left Root scrambling. He made his ground before wicketkeeper Dowrich had a chance to break the stumps but Chase’s throw had flicked a bail on its way, leaving the skipper short.

There were just three boundaries in a lunch score of 66 for two, Burns responsible for two and Stokes whipping through mid-on shortly after arriving.

The afternoon session started positively for England, Burns squeezing the first ball behind square for four as a prelude to some slightly freer stroke play. Things were heading in the right direction when Roach intervened, setting Stokes up with three short balls from round the wicket then rattling his stumps with one that nipped hard off the pitch.

Stokes defended the first bumper, wore the second on his helmet and pulled the third for four but when Roach attacked the stumps, England’s star attraction left a gap between bat and pad and paid the price.

Pope followed Stokes in being hit on the head by Roach but he reset well to reach tea. Burns passed 50 in his 41st over of work but was not able to bat out a second full session, thick-edging a cut off Chase and seeing Cornwall pluck out a hand for a wonderful reaction catch.

Buttler was next in, in serious need of a score to tighten his claim on a place in the side.

Despite the ongoing absence of fans, the stadium turned ‘red for Ruth’, with both teams helping the fundraising effort of the Ruth Strauss Foundation.