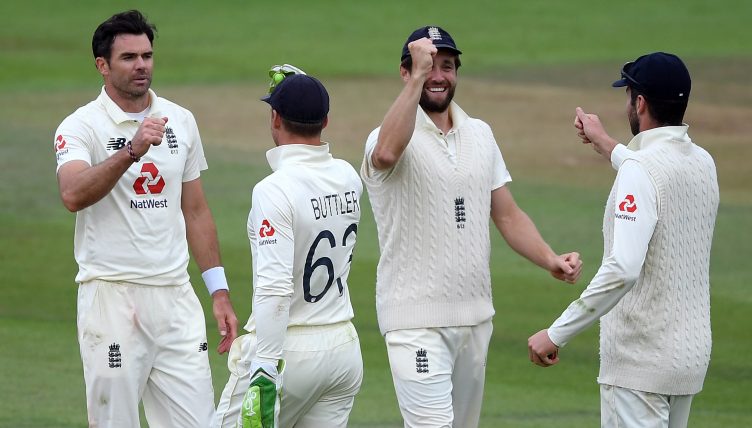 James Anderson moved to 598 Test scalps with a five-wicket haul before bad light halted his march towards 600 and England’s push for victory on day three of the series-decider against Pakistan.

Anderson’s bid to become the fourth member of the exclusive club, and the first fast bowler, got off to a perfect start when he removed Asad Shafiq with his sixth ball of the morning.

Pakistan captain Azhar Ali then led a spirited fightback, making a fine 141 not out to raise his side from the doldrums of 75 for five to their final total of 273 all out – with Anderson wrapping up figures of five for 56.

By that point he had already seen three catches go down in the space of 10 deliveries, Azhar spilled by Rory Burns and Stuart Broad while Zak Crawley grassed Mohammad Abbas.

England’s fielders might well have been hindered by the fading visibility, with the floodlights at the Ageas Bowl clearly taking over in the middle, and, once the hosts enforced the follow-on with a towering 310-run lead, it was the dark skies which stopped them going again.

Both teams had returned to the field, with Anderson desperate to get another chance at the top order, but umpires Michael Gough and Richard Illingworth could not allow them to begin the innings.

The weather is expected to play more of a part in the next two days but Anderson is surely primed to take his rightful role alongside Muttiah Muralitharan, Shane Warne and Anil Kumble.

Pakistan resumed 559 runs behind and in deep trouble on 24 for three, with Anderson having taken out Shan Masood, Abid Ali and Babar Azam in an inspired spell on Saturday evening.

He picked up exactly where he left off, snaring the edge of Shafiq with Joe Root holding on.

Two separate rain breaks ruined the morning session, which contained just 11.1 overs and 17 runs, but England did their best to see off Azhar cheaply, wasting their last two reviews on him either side of lunch.

One was a hopeful lbw shout from Broad, the other a fizzing delivery from Jofra Archer that flicked shoulder rather than glove on the way through.

The delivery was clocked at 91mph, one in a long sequence of rapid efforts from Archer, who ramped up his speeds consistently only to finish wickletless.

England’s only wicket of an afternoon session dominated by Azhar came when Dom Bess tempted Fawad Alam to lunge at one, edging to Jos Buttler to kickstart a fine showing from the gloveman.

Azhar kicked up a gear after the wicket, sweeping Bess well and punishing his occasional short balls, before finding a way to use Archer’s pace against him with a series of boundaries.

One to third man brought him his 6,000th Test run, a flick off his pads registered his fifty and a swivel pull showed a sense of real authority.

He found a willing partner in Mohammad Rizwan but the skipper led the way, accounting for 63 of their first hundred runs together.

Rizwan wrestled a share of the limelight when he stepped down the crease and launched Bess for six over long-off, in one swing bringing up his own 50 and the team’s 200.

The skipper’s 17th Test century followed next, courtesy of a measured cover drive off Bess, easing some of the pressure which has built around his reign.

England had been frustrated for almost 40 overs when a wayward Chris Woakes offering saw Rizwan strangled down leg. It required a good diving take by Buttler, but it was really just a warm-up for his next party piece.

Yasir Shah made a quick 20 before the combination of Broad and the new ball proved too much. The same pairing also did for Shaheen Afridi, but Buttler’s stunning one-handed take was the magical ingredient this time – plucking the ball out of the air to add a stunning grab to his first-innings 152.

Anderson would have loved similar support in the field but he was left aghast by two drops in the space of three balls in the cordon. First was Burns parrying Azhar for four on 116, before Crawley juggled Abbas.

His mood was not improved when Broad shelled a gimme catch off Azhar at mid-on in the next over, though amends was made to the team as he collected the loose ball and ran out Abbas.

Anderson made sure he still claimed his 29th five-for in Tests, Dom Sibley finally showing some safe hands behind the wicket, but his hopes of entering the 600 club before stumps will have to wait one more night.