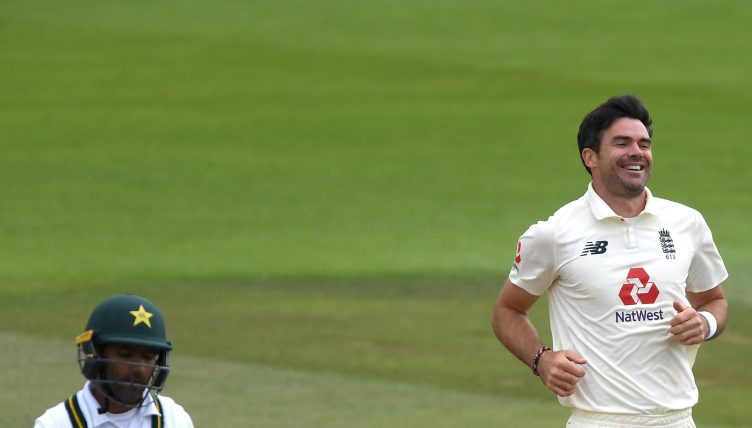 James Anderson moved to 597 career scalps on day three of England’s series deciding third Test against Pakistan, who had captain Azhar Ali to thank for a defiant half-century.

Having watched the hosts rack up 583 for eight declared at the Ageas Bowl, Pakistan reached tea on 158 for five as Azhar’s assured 82 not out kept England at bay.

Pakistan started in deep trouble on 24 for three, Anderson having taken all three wickets, and lost another batsman cheaply when the 38-year-old had Asad Shafiq held at slip with his sixth ball of the day.

That took him within three of becoming the first fast bowler in the history of Test cricket to join the elite 600 club – spinners Muttiah Muralitharan, Shane Warne and Anil Kumble are the only others to claim membership – but he, and England, were forced to wait for further joy.

Under-pressure skipper Azhar proved a thorn in their side for the first time in the series, leading successive stands of 45 and 83.

Having already seen off Shan Masood, Abid Ali and star man Babar Azam on Saturday evening, Anderson was quick to dial into the same testing line and length, with Shafiq pushing at one to hand Joe Root a regulation slip catch.

England did their best to see off Azhar, wasting their last two reviews on him either side of lunch, one a hopeful lbw shout from Stuart Broad and a fizzing delivery from Jofra Archer flicked shoulder rather than glove on the way through.

The delivery was clocked at 91mph, one in a long sequence of rapid efforts from Archer, who ramped up his speeds consistently as he attempted to be the point of difference.

Azhar’s partner Fawad Alam scored a duck in the second Test, a miserable return to the longest format after more than a decade away, and will have been mightily relieved to get off the mark and into the game.

He made 21 before lunging at the off-spin of Dom Bess, getting a decent workout here after failing to get an over in two of the last three games. The ball floated up, turned away and was well held by Jos Buttler after snaring the edge.

Azhar kicked up a gear after the wicket, sweeping Bess well and punishing his occasional short balls, before finding a way to use Archer’s pace against him with a series of boundaries.

One to third man brought him his 6,000th Test run, a flick off his pads registered his fifty and a swivel pull showed a sense of real authority.

Mohammad Rizwan, player of the match last time out for his 72, played the supporting role as he moved to 22 not out at the break.