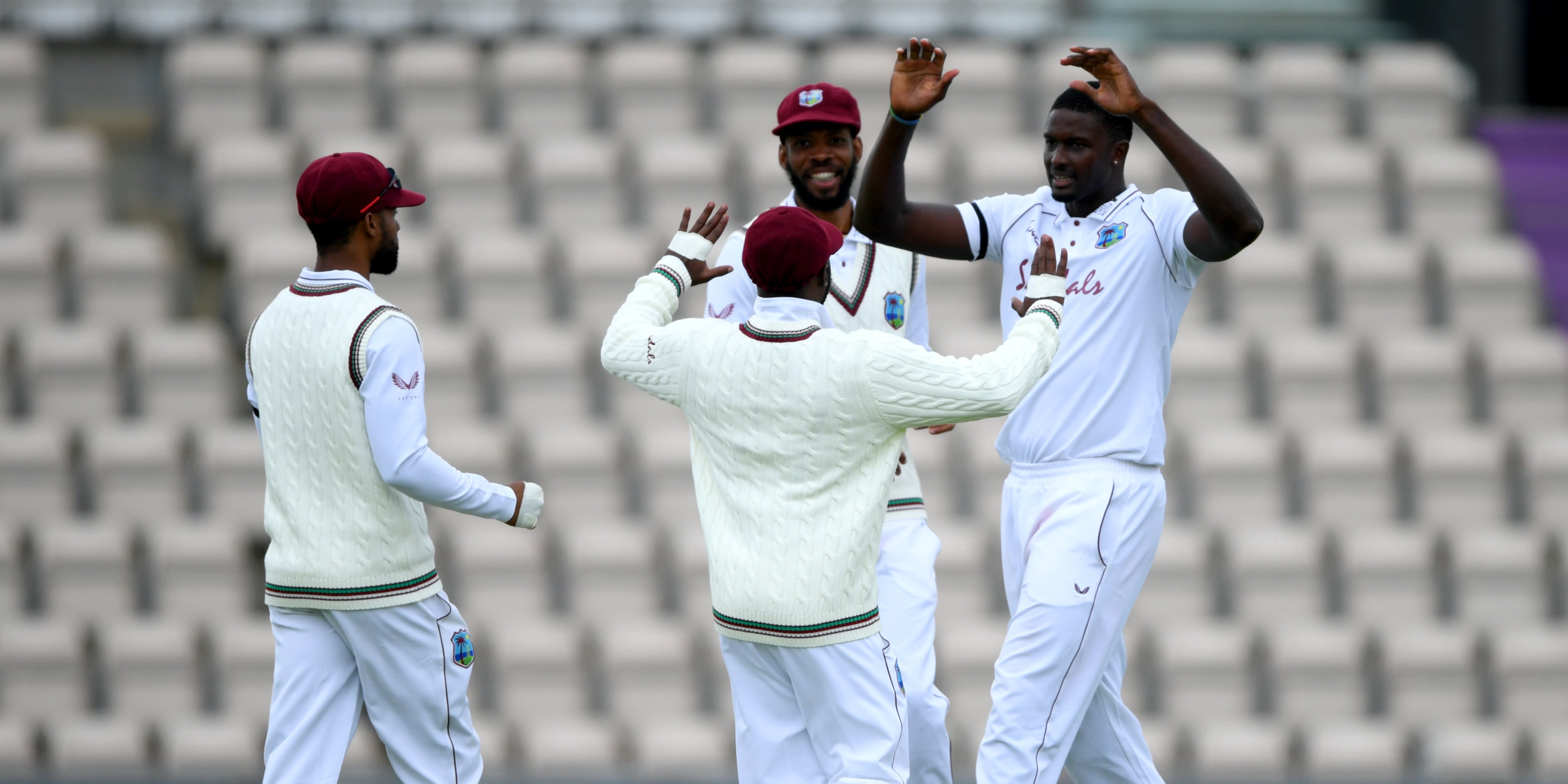 West Indies captain Jason Holder landed the first significant blow in the battle of the star all-rounders, claiming career-best figures of six for 42 to put Ben Stokes’ England under pressure on day two of the first #raisethebat Test.

With regular captain Joe Root watching from home with his new baby, Isabella, the home side were bowled out for 204 in tricky conditions that must have made Stokes question the wisdom of his decision to bat first at the Ageas Bowl.

While the heavy grey clouds and permanent floodlights did not help, Holder and Shannon Gabriel, who took four for 62, exploited them wonderfully before the tourists reached 57 for one when bad light stopped play.

Stokes top-scored with 43 but even that effort required two drops in the outfield. England are still in the game, but now boast a fragile lead of 147.

A rain-affected start to the series meant England resumed on 35 for one and they never managed to get their noses in front as their first innings was wrapped up in 67.3 overs.

Gabriel, who claimed the only success of day one, gave the Windies a perfect start with two more early breakthroughs in the morning session. His first was Joe Denly, who spent 27 minutes searching for his first runs of the day and was clean bowled between bat and pad from the very next ball.

His knock of 18 from 58 will do little to ease the scrutiny over his place, but his struggles were hardly out of place. Gabriel followed up by seeing off Rory Burns, who had looked solid for 30 before playing across a fast yorker that was destined for leg stump. Umpire Richard Kettleborough rejected the initial appeal but DRS settled the matter in Gabriel’s favour. It was the first of five decisions overturned by the West Indies.

From there on it was all about Holder, not just the world’s number one all-rounder ahead of Stokes but also the highest placed bowler on show at number three. He has been managing an ankle injury since arriving from the Caribbean but was fit enough to turn in his sixth five-for in the past 10 Tests.

He opened his account with Zak Crawley, effectively auditioning to replace Denly at number three when Root returns. As before Kettleborough rejected the lbw appeal and, as before, replays overruled him.

He sustained back-to-back boundaries off new man Ollie Pope but was quick to respond, drawing a loose prod in the channel and having the Surrey batsman caught for 12.

England’s lunch score of 106 for five would have been worse had Kemar Roach held a tough chance at fine leg off Stokes’ top-edge but the ball slipped loose. For a spell after lunch that looked to be a costly miss, as Stokes and Jos Buttler made a dashing stand of 67.

There was a second life for Stokes on 32 – put down horribly by Shamarh Brooks at short cover – but also a series of sweet strokes. Both launched Gabriel to the cover-point boundary in the first over of the session, the first of several to follow.

It was Holder whose guile and subtle movement ended the counter-attack, Stokes nicking behind after compulsively advancing down the pitch. Just seven balls later, Buttler (35) was brilliantly held one-handed by Dowrich.

He made it five when Jofra Archer was lbw for a duck, DRS to the rescue for the third time, and Wood was caught at gully to make it six. Dom Bess (31no) led a useful last-wicket stand of 30 before Gabriel sent James Anderson packing.

The West Indies’ post-tea response was split in two, a seven-over burst before bad light and a second lasting 12.3 overs.

There was an extended battle of wills between Anderson and John Campbell, with Richard Illingworth giving the left-hander lbw on 12, 24 and 28.

Only the latter decision stuck – Campbell successfully taking his side’s tally of successful reviews to five for the day – with Anderson finally ending a 47-run stand with Kraigg Brathwaite.

Mark Wood arrived at first change and topped 94mph in his first over, instantly giving him the top speed of the match. But Brathwaite and Shai, heroes at Headingley three summers ago, stayed together for stumps.