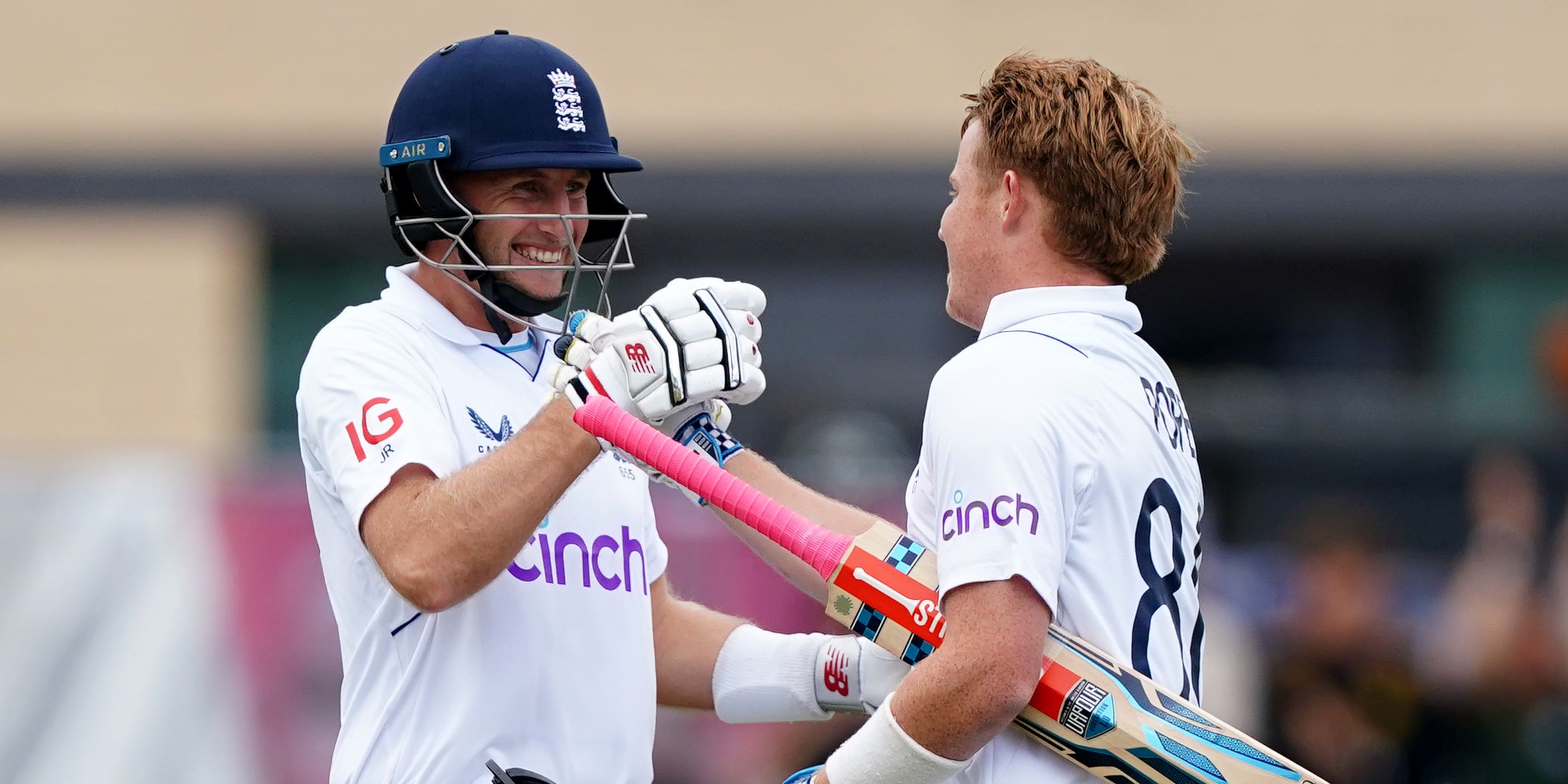 Ollie Pope repaid England’s show of faith and Joe Root continued his golden run of form as their twin centuries turned the tables on New Zealand in the second LV= Insurance Test.

Responding to the tourists’ formidable first-innings score of 553, England gave them a taste of their own medicine with a fluent, flowing batting display that carried them to 473 for five on a box-office third day at Trent Bridge.

England motored along at a fierce rate, scoring 383 in 88 overs, trailing by 80 but accelerating things enough to leave all results on the table.

Four years after his fast-track debut against India at Lord’s, Pope finally made his first century on home soil with a knock of 145 may go down as a watershed moment. He was unexpectedly promoted to number three at the behest of new skipper Ben Stokes and, after a nervy start last week at Lord’s, grew impressively into the role here.

Joe Root’s unbeaten 163, meanwhile, was merely the latest impeccable knock from a player in the form of his life. As well as being his fastest ever Test ton, coming up in just 116 balls, it was also his second in as many games since giving up the captaincy, his fifth in his last nine innings on home soil and his 10th since the start of 2021.

He now sits level with his contemporaries Steve Smith and Virat Kohli on 27 hundreds and there is a growing feeling that he could be the one to leave the pack behind.

England had started on 90 for one, with the words of batting coach Marcus Trescothick ringing in their ears. On the eve of the match he had told his side to prepare for a day of “hard work and discipline” but, in reality, things came much easier than he could have hoped.

Alex Lees set the tone from the third ball of the morning, pounding Tim Southee through cover point for four. The left-hander had looked like a crabby, pensive blocker in the West Indies just a couple of months ago but appears to be evolving swiftly into a more liberated version of himself at the prompting of the new leadership team of Stokes and head coach Brendon McCullum.

He was good value for his first England fifty, opening up the off side well to draw the seamers back into his pads. Lees had also left the ball well but his judgement momentarily wavered when he followed Matt Henry delivery that left to be caught behind for 67.

Pope started less assertively, twice nicking Trent Boult in front of the slips in a morning session that saw him add a gentle 33 in two hours as Lees, then Joe Root, took the driving seat.

He stepped things up a notch after lunch, taking just 10 balls to move from 84 to his long-awaited hundred. A set of four overthrows helped him along the way but there were also three boundaries clean off the middle of the bat as he found his timing.

Pope made his only other century 34 innings and two and half years ago in Port Elizabeth, with his ecstatic celebrations telling their own story. Root’s arrival had been a perfect release of pressure for the 24-year-old, as New Zealand poured their energy into cracking the code of how to keep him quiet in England.

He drove, pulled and cut his way to 50 without breaking sweat – with a fingertip half-chance on 27, parried at second slip – his only moment of doubt. On 52 he threatened to get himself in trouble when he attempted to slog-sweep 80mph Southee like he was a club spinner but the shot landed safe and he soon returned to a more orthodox method, finding gaps in every field setting that Tom Latham threw at him.

A deft reverse sweep took him within one hit of a hundred and it came off a rare mis-step, dragging Daryl Mitchell past his stumps and away for four. England scored 136 in a wicketless afternoon session, Pope adding an uppercut six off Henry to a repertoire of flashy cross-bat strokes.

Improbably, the tempo picked up again after tea. Boult struck twice with the second new ball, Pope top-edging a pull to end a memorable stay and Jonny Bairstow caught behind off one that grazed the glove.

England were still more than 200 adrift when Stokes stepped out, but he started in fifth gear and never retreated. He flayed 46 in 33 balls, with two sixes and six fours in a furious onslaught. His exuberance proved his undoing, holing out off his third ball from spinner Michael Bracewell after launching the second ten rows back.

Joe Root moved serenely past the 150 mark, taking the deficit into double figures at the same time, with Ben Foakes supporting well on 24no after Will Young’s fumble reprieved him on nine.