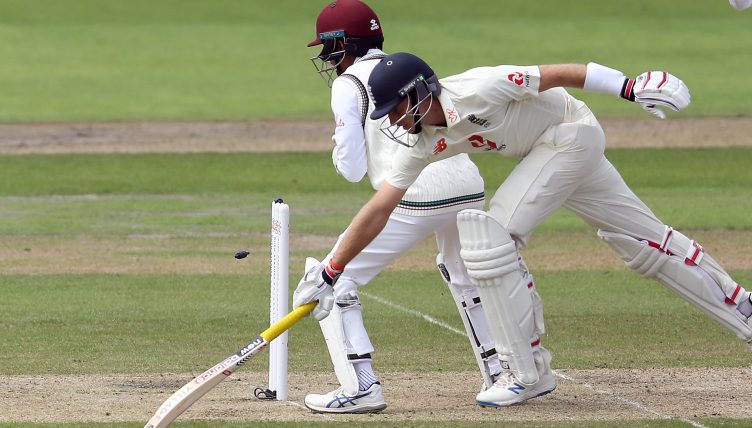 Joe Root’s unexpected return to number three ended with the England captain run out for 17 as the West Indies left their hosts 66 for two on the first morning of the decisive third Test.

With star all-rounder Ben Stokes not fit enough to play a full part with the ball at Emirates Old Trafford, England made the brave decision to drop batsman Zak Crawley in favour of an extra bowler.

That allowed Root to field a four-strong pace attack featuring the returning Jofra Archer and James Anderson as well as retaining the spin of Dom Bess, but also forced the middle order to shoulder added responsibility.

The onus was on the them as soon as Jason Holder won the toss and opted to field, with Kemar Roach dismissing Dom Sibley lbw for nought in the first over of the day.

Sibley batted over nine hours for his 120 in the previous match but here bagged his second duck of the series as Roach went full and straight at the stumps to great effect.

That brought Root, who has spoken of his preference for batting at four on several occasions, to the crease after just six deliveries and with plenty of work ahead.

Together with Rory Burns he attempted to calm things down for England, playing with caution in a stand of 46 that lasted more than 20 overs.

His hard work was undone when he and Burns set off in pursuit of a quick single off Rahkeem Cornwall, recalled by the Windies ahead of paceman Alzarri Joseph.

Roston Chase picked up and released sharply at short third man, with his throw flicking a bail on its way to wicketkeeper Shane Dowrich. That left Root well short of his ground, with England 47 for two.

Burns did little wrong as he batted out the session, reaching 33 not out 76 balls, hitting two of the session’s three boundaries. Stokes struck the third in a brief cameo before the break and once again looks likely to be key to England’s prospects.

Despite the ongoing absence of fans, the stadium turned ‘red for Ruth’, with both teams helping the fundraising effort of the Ruth Strauss Foundation.