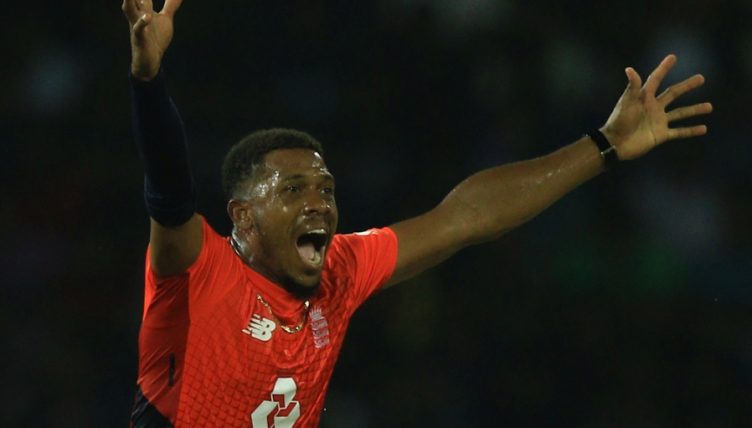 Joe Root (55 from 40) steadied the ship before Billings took over; after a scratchy start he was finding and clearing the boundary with regularity in the closing overs to finish with a career-best 87 from 47. England plundered 44 from the last two overs to finish with 182/6.

A superb recovery, but it still looked no more than a par score on a flat pitch at Warner Park in St Kitts with short, straight boundaries. But the West Indies were about to make England’s start look positively solid.

The big wicket of Chris Gayle was the first to fall, caught by Root at mid-on off David Willey, who then had Shai Hope superbly caught by Eoin Morgan. The England captain managed to hold on to a steepler despite colliding with Tom Curran in the process.

Then it was over to Jordan, who ended the match as a contest with four wickets in two overs. Darren Bravo was caught behind when beaten for pace, and Jason Holder was trapped in front first ball. Nicholas Pooran fell in identical fashion to Bravo in Jordan’s next over before Fabian Allen steered a short ball to Root at slip.

West Indies did at least avoid the ignominy of the lowest ever T20 international total when last man Obed McCoy got off the mark with a swiped single to move the total beyond the 39 all out made by the Netherlands against Sri Lanka in 2014.

It was the smallest crumb of comfort, though, with the final wicket falling to Plunkett – Billings appropriately the catcher – with just 45 on the board; the second lowest total ever and worst by a Test-playing team.

England’s 137-run victory is the fourth-biggest margin in T20I history and England’s best ever knocking a 116-run win over Afghanistan back in 2012 into second place. It’s only West Indies’ second worst defeat, though, after a 143-run thrashing against Pakistan a year ago.

Jordan’s 4/6 were the best T20I bowling figures ever for England, Ravi Bopara’s 4/10 against the Windies in 2011 knocked off its perch, while Billings’ 87 is the sixth highest score made by England in the shortest format and highest since Alex Hales’ 116 not out against Sri Lanka in the 2014 World T20.

The third T20 is played here on Sunday.