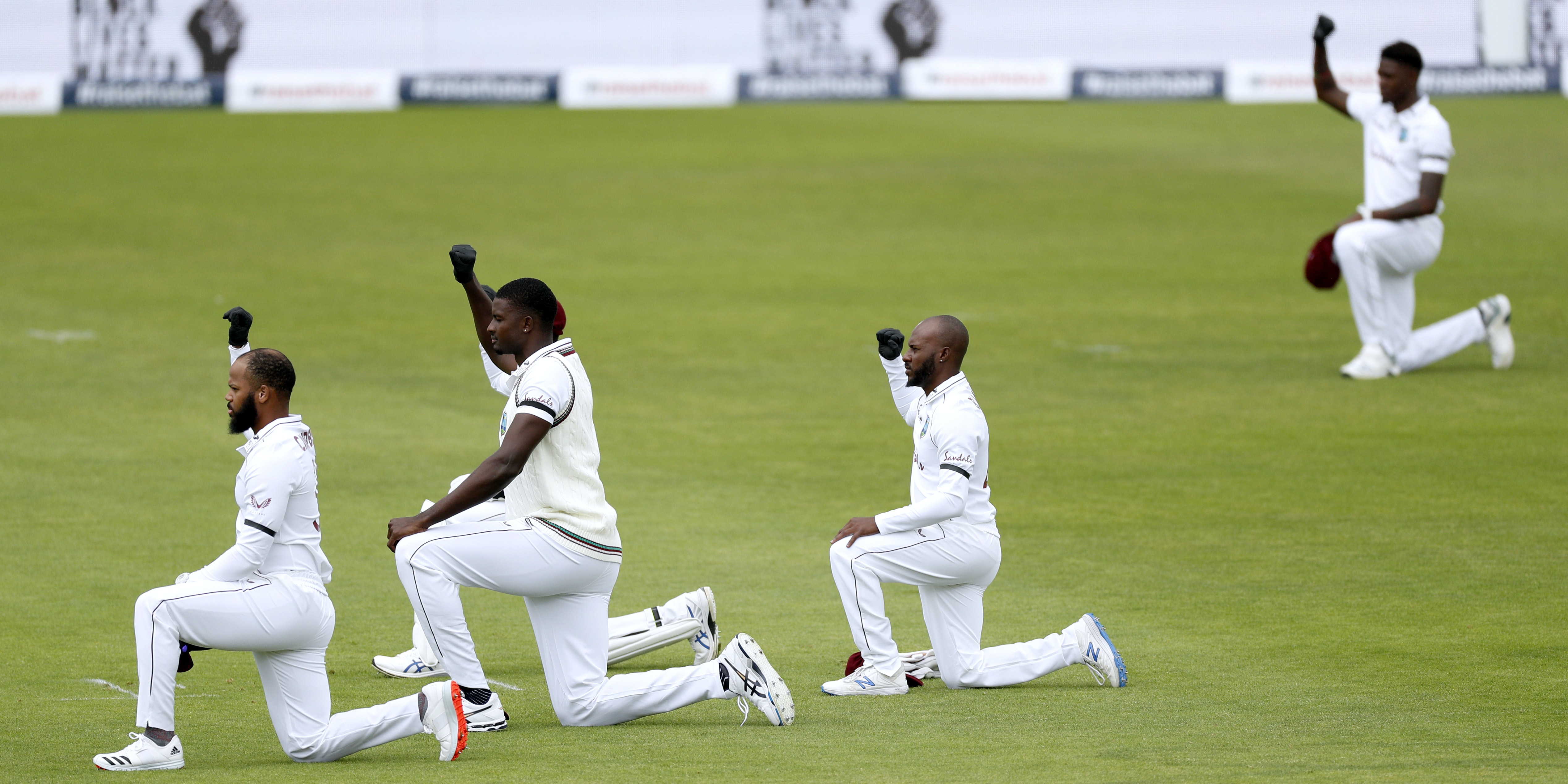 It was already known that both sides would be wearing the BLM logo on their collars in recognition of the global anti-racism protests that followed the killing of George Floyd in the United States, but they added a striking visual before the start of play.

The West Indian team took up their fielding positions at the Ageas Bowl before all 11, joined by England batsmen Dom Sibley and Rory Burns and umpires Richard Kettleborough and Richard Illingworth, put one knee to the turf in unison.

The action was replicated off the field, with the remaining squad players and every member of backroom staff lining up along the boundary rope to show support.

The West Indies group each wore a single black glove and raised their right fist, in a call back to the 1968 Olympics, where American sprinters Tommie Smith and John Carlos made the gesture while on the podium.

“I think it’s very important for both sides to show solidarity and to do it together,” Buttler told the BBC.

“I thought it was very powerful and a very powerful message that needs to be taken forward. I’m glad we were able to be a part of that.”

England’s assistant coach Graham Thorpe, one of those who left the pavilion to join the gathering at the edge of the field, added: “The bottom line is that we feel there is no room for racism in the sport.

“It was good to show that solidarity with the West Indies. You want to be able to stand together. That’s what we spoke as a team before the game. We’re proud to have done it.”

Thorpe’s opposite number Roddy Estwick suggested the use of gloves was as much about standing out and inspiring debate than an overt attempt to raise the political stakes.

“We felt like we wanted to do something different, we felt if we wanted to make a bigger statement we should wear the black glove and it worked because people are talking about it,” he said.

“The guys came up with their way of doing things, and that was our way of showing our support to the Black Lives Matter campaign. For me it was a good feeling because we have to make change.

“For us it’s all about equality. It’s all about honesty, it’s all about treating everybody equally. We were happy as a group to do it and I thought it was really wonderful to see England supporting us as well.”

Regular rain delays meant there were only 17.4 overs possible, with England reaching 35 for one. Sibley was the man down, marking his first Test innings since January with a four-ball duck, cleaned up by Shannon Gabriel offering no shot.

“It’s unfortunate for Dom at the top. He’s waited a long time, had lots of practice, lots of training, but he’ll be OK. He’s a tough cookie,” noted Thorpe.

England will resume with Burns on 20 not out and Joe Denly unbeaten on 14, with the latter potentially vying with next man Zak Crawley for one place ahead of a notable return for the second Test.

“I wouldn’t say it’s a straight shoot out but guys will know that Joe Root is going to return to the team,” said Thorpe.

“Individuals can feel a certain amount of pressure but there is pressure in international cricket.”