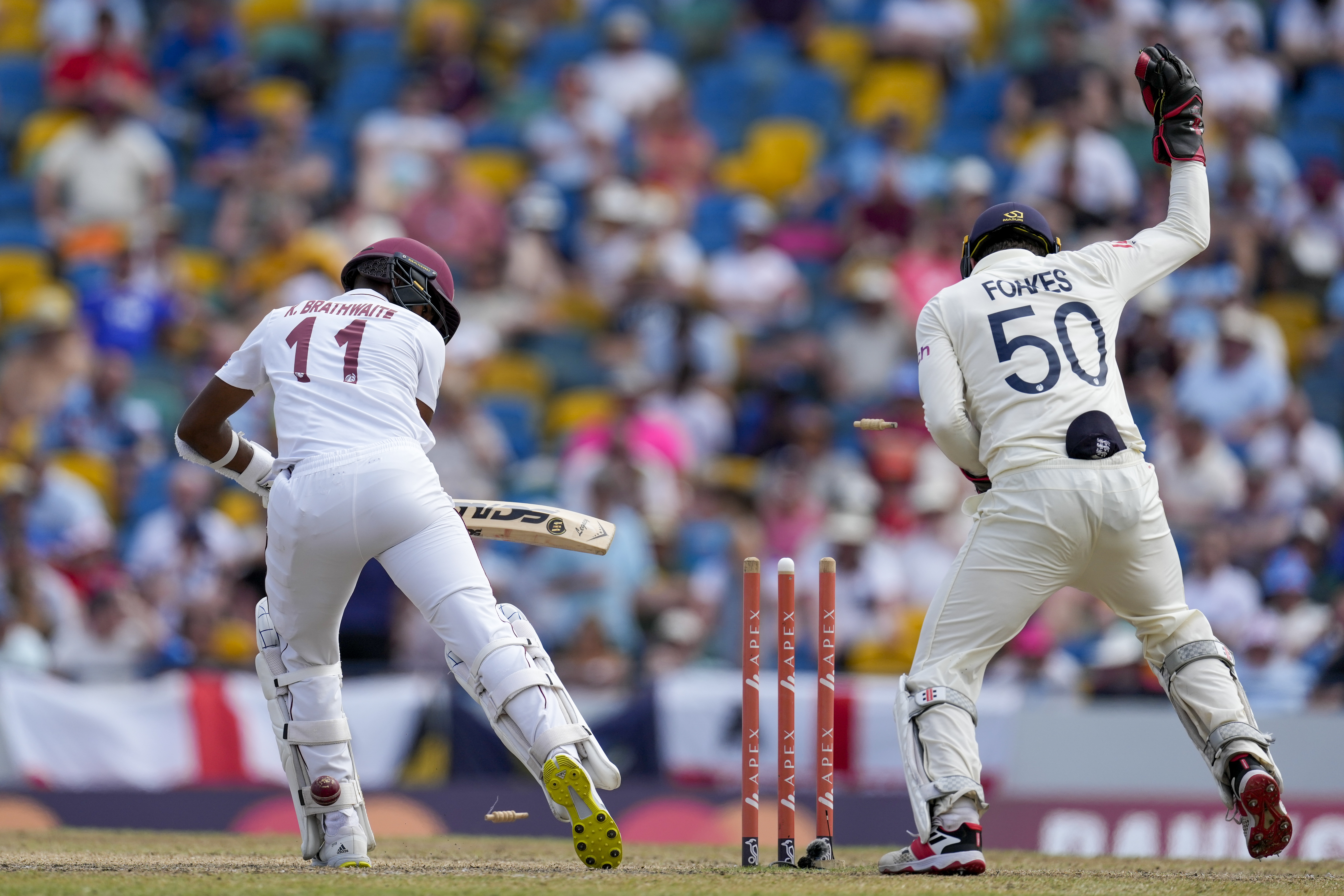 Kraigg Brathwaite completed a masterclass of defence and defiance to leave England a race against time after four days of the second Test in Barbados.

The West Indies captain arrived at the crease on Thursday evening and hogged the stage until Saturday afternoon, digging his heels in for 11 hours and 51 minutes as he carved out a crucial 160 on a lifeless pitch at Kensington Oval.

The hosts were finally wrapped up for 411 in an arduous 187.5 overs, a first-innings deficit of 96, leaving England less than four sessions to manufacture a winning position.

By stumps, Zak Crawley and Alex Lees had stretched that to 136 without loss but a tough final day awaits.

Bajan favourite Brathwaite soaked up a remarkable 489 deliveries to eat up precious time at his home ground, exactly 400 of which were scoreless, before falling to England’s own epitome of endurance – Jack Leach.

The left-arm spinner bowled 69.5 overs, the most by an Englishman since Phil Tufnell’s 71 at Wellington in 1992. He provided more control than creativity but never flagged despite his captain’s hefty demands and finished with admirable figures of three for 118.

The delivery he produced to finally end Brathwaite’s epic knock was at least a fitting one, pitching on middle, sneaking past the edge and clipping the top of off, ending the longest Test knock anywhere in the world since New Zealand’s Tom Latham three and a half years ago. It was the 214th time Leach had bowled at Brathwaite since the start of the innings and a pleasing end to an often laborious battle of wills in which neither man blinked.

In terms of time taken by a West Indian, Brathwaite’s knock now sits third behind the great Brian Lara’s world record scores of 375 and 400.

The passivity of the home scoring means there is still a slender route to victory for England, who batted 37 overs fewer in their first innings but scored almost a hundred more. But they will need to judge their declaration just right and ask their weary bowlers to get things done in a hurry if they are to take a 1-0 series lead.

In Antigua Joe Root left the Windies a target of 286 in 71 overs and came up six wickets short. The prospect of bowling out their opponents, and specifically their belligerent captain, for a second time on day five could prove ambitious.

There was rain around in the morning, delaying and then interrupting the first session, and the hard road ahead was telegraphed by nightwatch batter Alzarri Joseph. Resuming with the score on 288 for four, he occupied 76 balls before slashing a wide one from Ben Stokes to the safe hands of Dan Lawrence.

Jack Leach gets it done for England

Leach’s work began with 16 tight overs before lunch, stitching together 10 maidens and conceding only 10 runs as Brathwaite’s obduracy slammed the brakes.

The West Indies were still 156 runs adrift and five down at the start of the middle session, with the dangerous Jason Holder gifting England a second breakthrough.

Attempting to use his long arms to heave Saqib Mahmood down the ground he sent a spiralling catch to mid-on, where Matthew Fisher overcame a momentary wobble to hang on.

In doing so he handed his fellow debutant a maiden Test wicket after 17 barren overs. It was not as pretty as the yorker he bowled Jermaine Blackwood with on day three, but while that was chalked off as a no-ball this one stayed inked in the scorebook.

Brathwaite did not change a thing, progressing with tunnel vision towards 150 in 458 balls, never once stepping up a gear.

He was soon staring down his third new ball of the innings, England reluctantly unwrapping yet another fresh Dukes. It was the gift none of them had ever hoped to see.

Stokes and Fisher shared it in a further sign of Chris Woakes’ diminished status but it took the return of the workhorse Leach to prise out Brathwaite. He had bowled tightly throughout and got a few to bite off the turgid surface but must have been as surprised as anyone to see Brathwaite beaten.

Woakes, allowed just seven overs all day, got Kemar Roach lbw and Saqib collected a second when Veerasammy Permaul backed away. But Leach was a worthy finisher when he trapped Josh Da Silva in front of leg.

Crawley (21no) and Lees (18no) sprinted off the field to get ready but any hopes they had of scoring at a similarly brisk pace were checked by some tidy bowling.