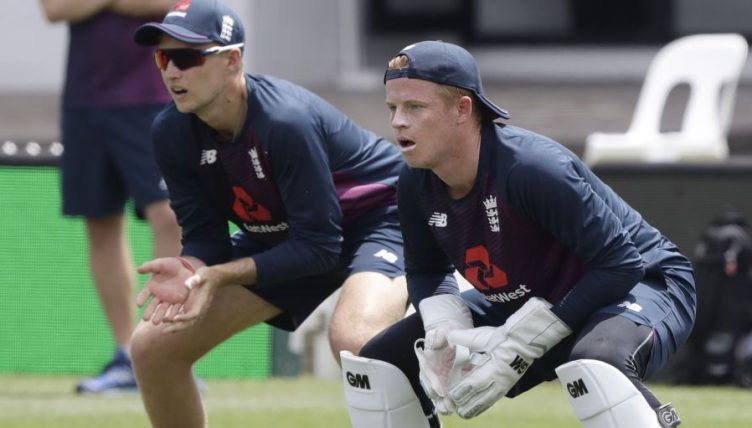 Jos Buttler has emerged as a major doubt on the eve of England’s second Test against New Zealand at Hamilton after the wicketkeeper-batsman tweaked his back during a gym session.

Buttler had only returned behind the stumps in England’s crushing defeat at Mount Maunganui having played as a specialist batsman during the Ashes.

With Jonny Bairstow having returned home after a brief spell with the squad as injury cover for Joe Denly, there is no specialist back-up keeper in England’s squad.

If Buttler is ruled out then Ollie Pope – who has kept in only five of his 33 first-class matches and most recently for England Lions against India A in February – is primed to take on the gloves at Seddon Park.

England captain Joe Root said: “Jos has tweaked his back in the gym, we’ll have to find out a little bit more information on that throughout (the next 24 hours) and see where he’s at.

“We knew that this was a possibility when we selected the squad and I’m quite happy that Popey’s got the capability of doing a good job for us.”

So, if Ollie Pope does take the gloves in Hamilton will it be the first time England's football and cricket keepers have the same surname and does anyone else give even the tiniest of shiny shites about this?

Pope was going through some wicketkeeping drills on Thursday afternoon in England’s optional training session, where only Buttler and paceman Jofra Archer did not make an appearance.

Root added: “There’s a number of different combinations we could go with and I think a lot of that will rely on the surface.

“Trying to find the best combination which would take 20 wickets and then balancing that in terms of getting the batting where we want it to be. It could be an all-rounder, we’ll see.”

Bairstow was left out of the squad for the ongoing series after averaging a paltry 20.25 in nine Tests this year – although he was central to England’s historic World Cup win earlier this summer.

An average that was once well in excess of 40 has now dropped to 35.26 in 69 Tests, a figure Root believes is significantly less than what someone with Bairstow’s talent is capable of achieving.

While Root was cautious about confirming whether Bairstow’s best route back into the team was as a specialist batsman, he would back his Yorkshire teammate to make notable contributions if and when he is recalled.

Root said: “You can’t rule out anything out.

“For him, he’s just got to continue to keep looking to improve and work hard at his game. When he gets his opportunity wherever that is, take it. He’s someone that’s very good at doing that when that happens.”

Bairstow will be the lone batsman on a pace bowling camp going out next month to South Africa alongside Mark Wood and James Anderson, with the trio hopeful of pressing their claims for the Test series against the Proteas.

Asked whether Bairstow is in line for a squad place in South Africa, Root responded: “No. It just means he’s got an opportunity to push his case and that selection will happen when we get back.