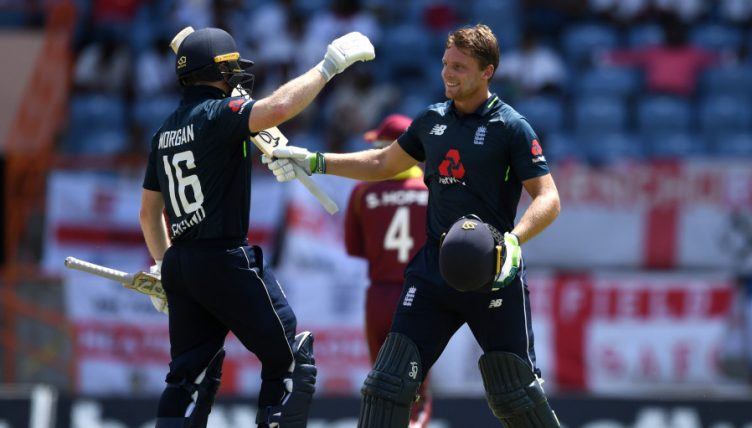 Buttler struck a magnificent 150 off just 77 balls at the National Cricket Stadium in Grenada to help England close their 50 overs on 418/6, a total that looked under serious threat while Chris Gayle was blasting his way to 162 off 97 balls before the Windies ultimately fell 29 short.

Buttler’s knock included a staggering 12 sixes, with England hitting 24 in total – the highest by any team in a one-day international – while he also shared a stand of 204 with Morgan, who was full of admiration for his team-mate after the contest.

“Jos is built like a champion racehorse and when he gets into his stride he is very difficult to stop,” he told Sky Sports. “Watching him in full flow was exceptional and gave us the best chance to put on a really strong score.”

Morgan also made a century before being dismissed for 103, while Jonny Bairstow (56) and Alex Hales (82) got England off to a positive start after sharing an opening stand of 100.

“Bairstow and Hales were absolutely excellent and got us off to a flying start – they laid the platform for myself and Jos to build a partnership,” Morgan added.

The Windies did give a good account of themselves trying to chase down their daunting target, with Gayle once again setting the standard with his second century of the series.

However, the hosts came up runs short as they were all out for 389, with Adil Rashid – who took four wickets in his final over to finish with 5/85 – and Mark Wood (4-60) impressing with the ball for England.

The Three Lions now take a 2-1 lead into the final match of the series in St Lucia on Saturday.