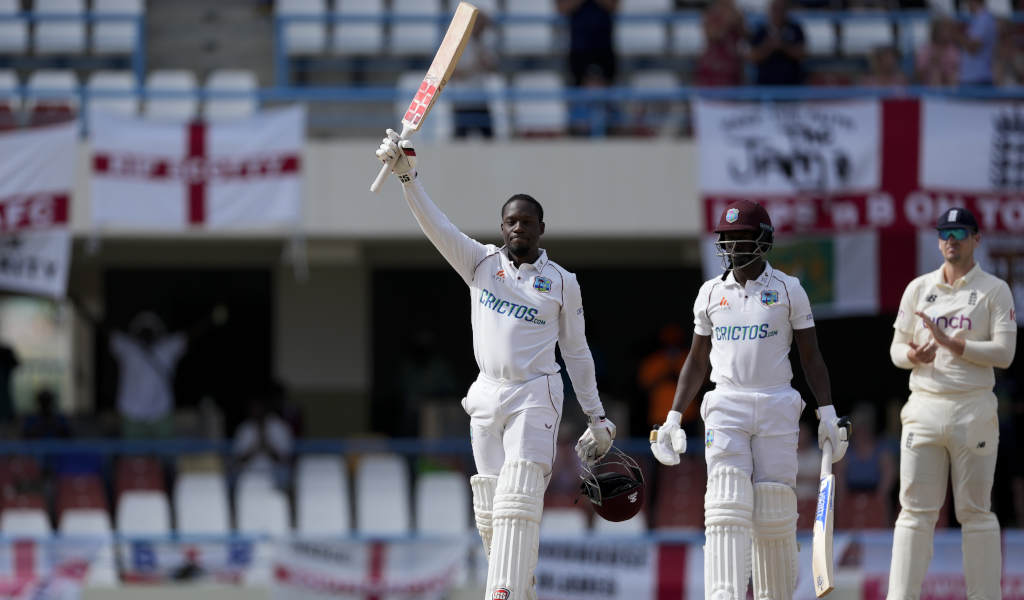 England lost Mark Wood to injury and control of the first Test to a marathon century from Nkrumah Bonner as the West Indies moved ahead in Antigua.

Wood was cast as the spearhead of the attack for this tour but instead played the role of bystander on day three, with an elbow problem reducing him to just five overs in heavy strapping during the morning session.

He did not re-emerge after lunch, instead receiving treatment from medical staff as his team-mates toiled away for meagre rewards on a sleepy pitch at the Sir Vivian Richards Stadium.

Bonner took full advantage of Wood’s absence and the collective struggles of those who remained, compiling an old-fashioned 123 that ground England down in painstaking increments. The Jamaican held court for well over nine hours and soaked up 355 balls along the way.

By the time he was dismissed by part-time spinner Dan Lawrence at the death his bloody-minded display had guided the West Indies to 373 for nine, and a lead of 62.

Bonner had a couple of slices of good fortune, top-edging Ben Stokes agonisingly short of mid-wicket with just 40 to his name and then being dropped by Zak Crawley in 73 after offering a bat-pad chance at slip.

But they were isolated moments in a knock that was defined by purpose and perseverance from a 33-year-old whose late arrival on the Test scene has added some welcome grit to the West Indies middle order.

Aided by a stubborn lower order he condemned England to an energy-sapping 157 overs in the field, ensuring the names of the absent James Anderson and Stuart Broad would not be disappearing from the conversation in the near future.

Chris Woakes and Craig Overton continued to underwhelm, failing to get the best out of the new ball for the second time in as many days and causing precious few scares. Instead, England relied more heavily than they would have liked on Stokes, who has only just recovered from a side strain dating back to the Ashes.

At the start of last he was still slated to play as a specialist batter and a couple of days later he was talking about chipping in a few overs if needed. But Wood’s absence changed the dynamics and he responded by shouldering a considerable burden.

By the close he had sent down 28 overs in total and was his side’s best bowler by a distance with figures of two for 42. Skipper Joe Root must have been worried about incurring another injury by allowing his vice-captain to tear in so often, but the contest only really came alive when he was in it.

It was Stokes who gave England a brilliant start to the day, taking the edge of fellow all-rounder Jason Holder after just four runs had been added to the overnight score of 202 for four. Holder has history in this fixture and his early departure felt important.

As it turned out, Bonner’s scalp would have been even more vital. But when he flapped Stokes to mid-wicket, substitute fielder Ollie Pope could not quite stretch his fingers under the ball.

Bonner, enjoying a profitable second coming after a brief trial in Twenty20 internationals a decade ago, went on to put on 73 with wicketkeeper Josh Da Silva as Woakes and Overton failed to threaten.

England gave themselves a chance with a double breakthrough after lunch, Da Silva lbw to Leach and Overton bouncing out Alzarri Joseph, but to end the resistance they needed Bonner.

Leach almost got him, but Crawley parried the deflected chance. The remainder of the session became a draining blockade, with 51 runs scored in 30 overs through the afternoon.

Bonner reached tea on 98 and received a gift from Leach to reach three figures, sweeping round the corner after 257 deliveries of work. It was his second Test hundred, having opened his account 12 months ago against Sri Lanka at the same ground.

On 102 and 112 he survived English reviews for close lbw shouts by Leach, but the technology finally ruled against him when it detected the tiniest of edges off a Lawrence drag down.

More concerning for England was the failure to trouble his tail-end partners, with Kemar Roach occupying 89 balls before being run out by Pope and Veerasammy Permaul taking up 87.