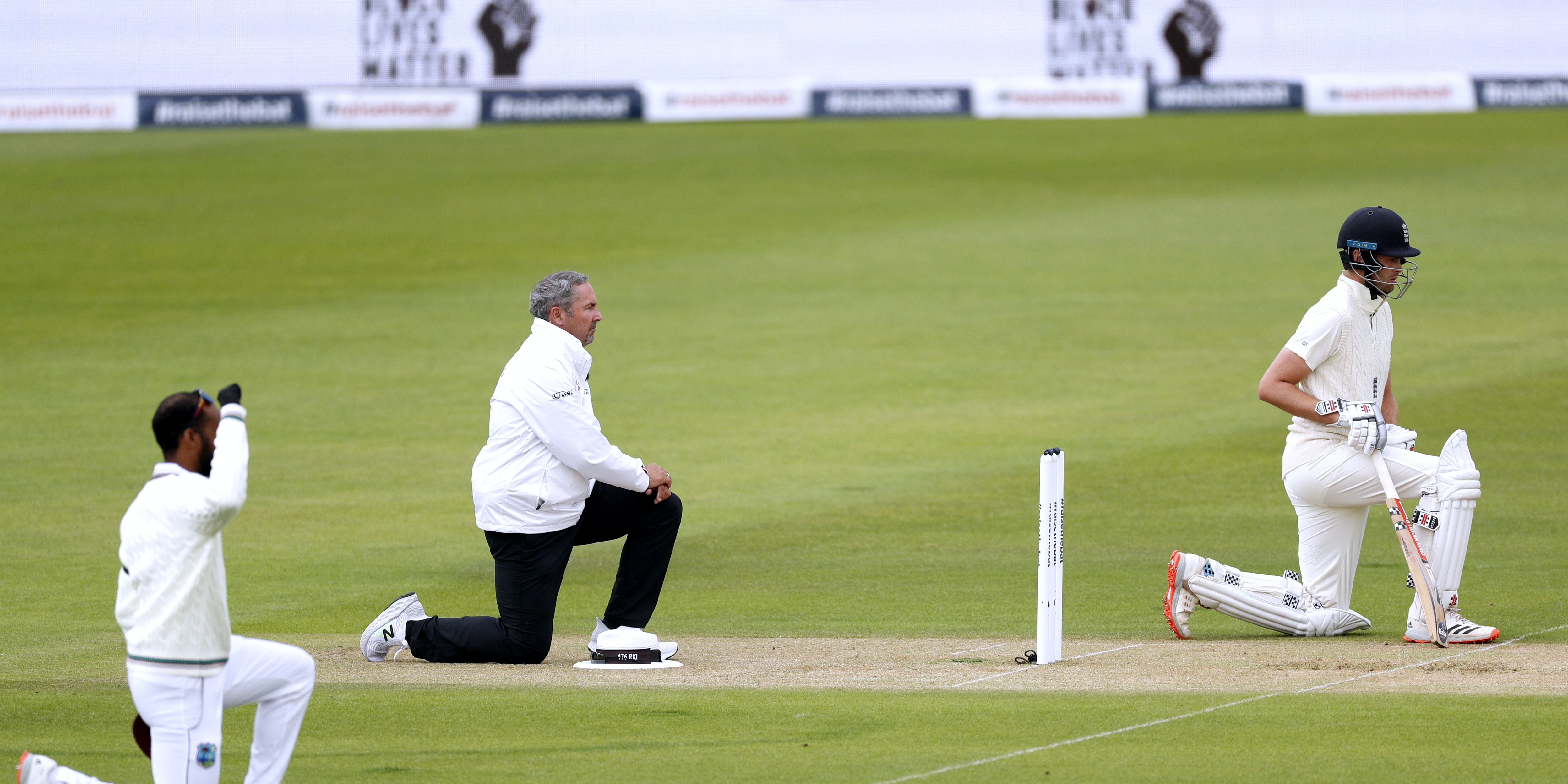 England and the West Indies marked the long-awaited return of international cricket by taking a knee in a unified a show of support for the Black Lives Matter movement, but events in the middle were badly affected by persistent rain.

The first Test match anywhere in the world since March 2 was delayed for three hours by grey skies and drizzle in Southampton and there were two further delays before an early tea was called with the hosts 35 for one in the 18th over.

Dom Sibley was the man to fall for a four-ball duck but the most significant action of the day came before a ball had been bowled, with both teams coming together to deliver a clear message of unity and equality.

The rivals initially observed two minutes of silence, one in honour of those lost during the coronavirus pandemic and another for the Caribbean great Sir Everton Weekes, who died aged 95 last week, before taking matters into their own hands.

Just before the first ball was delivered, and with batsmen, umpires and fielders in position, the sides collectively took a knee – with all members of the West Indian contingent wearing a single black glove and raising their right fist.

The remainder of the squad members and backroom staff from each side followed suit, shoulder to shoulder at the boundary edge.

England’s absent Test captain Joe Root was watching from home with the latest addition to his family – Isabella Florence – having left the bio-secure team bubble to attend the birth.

Stokes had earlier confirmed that Stuart Broad would be missing his first home Test in eight years, a run of 51 matches dating back to a dead rubber in 2012, with record wicket-taker James Anderson back to lead an attack that included Jofra Archer and Mark Wood together for the first time. Chris Woakes was the other squad member to miss out.

Stokes and Jason Holder had a brief misunderstanding after the Englishman won the toss, Holder forgetfully going for the now outlawed handshake as his opposite number attempted to bump fists.

When play did get under way the batsmen looked rustier than the bowlers, Rory Burns leaving the fourth ball of the morning from Kemar Roach and surviving a DRS appeal by a narrow margin. Sibley had no such fortune when he also offered no stroke to Gabriel, paying with his stumps as he misread the line.

The players were forced from the field a few moments later to compound the opener’s frustration. The second passage of play consisted of just seven balls, one of which Joe Denly mis-hit just short of mid-on, before a slightly longer sequence moved the game along slightly.

In it Burns made his way to 20 not out, nudging the first boundary of the first-class season through mid-wicket and cutting Alzarri Joseph past backward point.

Denly struggled more for his 17 not out, edging just wide of third slip off Gabriel, but was still in place as more rain arrived to force an early tea.