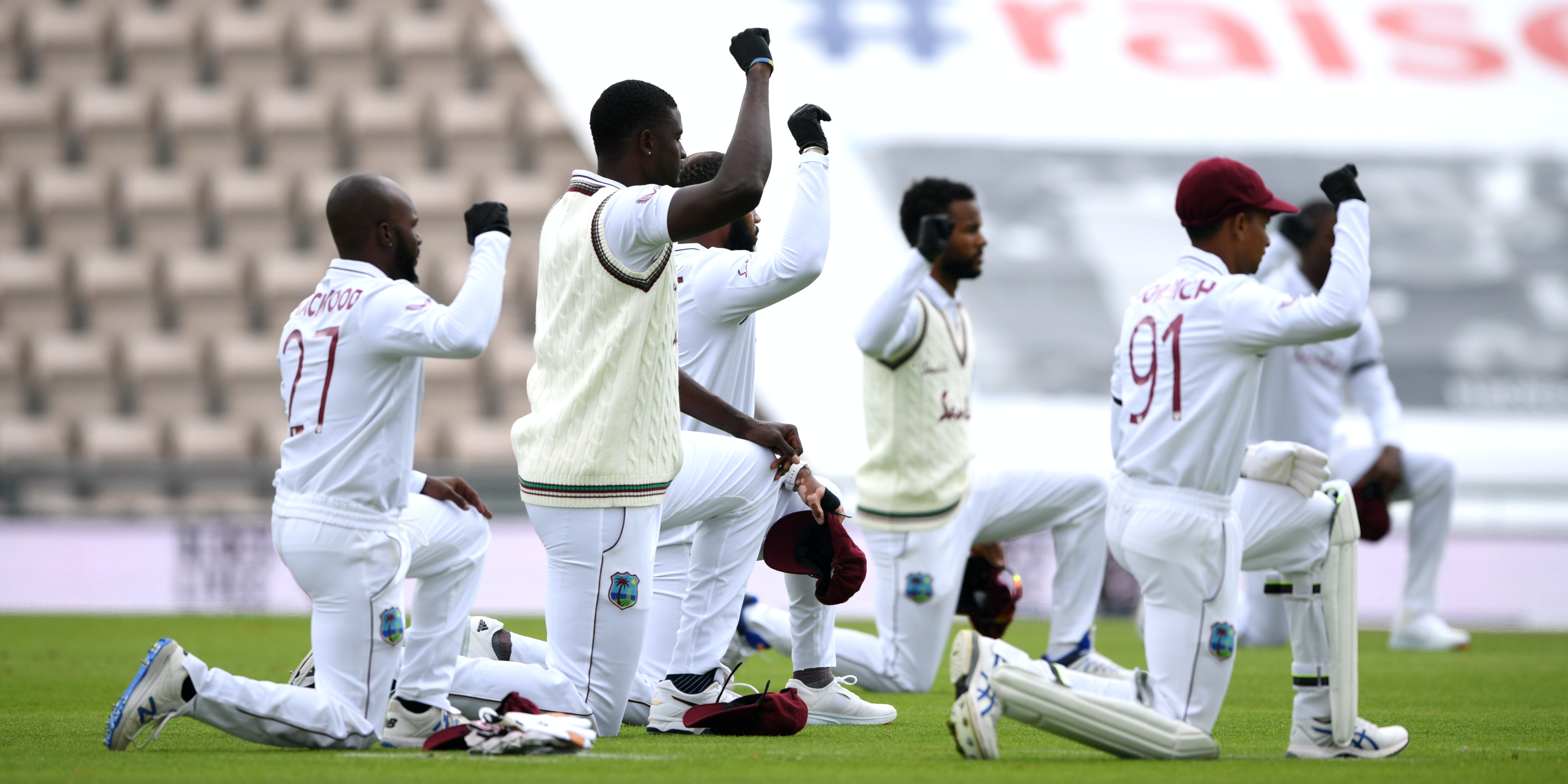 The long-awaited return of international cricket suffered a frustrating start as rain dominated day one of England’s Test series against the West Indies, but the weather could not stop both teams taking a knee in support of the Black Lives Matter movement.

The clash inside the bio-secure bubble at the Ageas Bowl represented the first meeting of any international teams since March 13, with the previous Test concluding 11 days earlier, but only 17.4 overs were possible as England reached 35 for one.

Dom Sibley will be cursing his fate after falling for a four-ball duck playing no stroke but the most significant moment took place before a single ball had been bowled, when the entire squads of both sides put up a united front in a gesture of solidarity and equality.

After the toss was delayed by three hours, Ben Stokes eventually winning and opting to bat as he officially became England’s 81st Test captain, the sides formed a semi-circle in the middle and stood for two separate silences.

The first recognised those who have lost their lives during the coronavirus pandemic and the second was dedicated to the life of the great Sir Everton Weekes, who died last week age 95.

Fifteen people remained on the field – 11 West Indians in the field, England openers Sibley and Rory Burns as well as umpires Richard Kettlebrough and Richard Illingworth.

After each took their starting positions they sunk in unison to their knees, with the Caribbean contingent wearing black gloves as they raised their right fists – echoing a memorable act of protest from the 1968 Olympics.

At the boundary edge all remaining squad members and non-playing staff followed suit, with both groups shoulder to shoulder.

The teams were also wearing the Black Lives Matter logo on their collars and it seems unlikely the sentiments shown here will be shunted to the background any time soon.

The sobriety of the act stood at odds with a light-hearted moment after the coin flip, when touring captain Jason Holder went for a now-outlawed handshake with Stokes, who was instead going for a fist bump.

After an awkward laugh he confirmed England’s team selection – no Stuart Broad in a home Test for the first time in eight years and a first joint appearance for Jofra Archer and Mark Wood in the five-day format.

The wisdom or otherwise of that call will be tested later in the game, with Stokes opting to bat despite the gloomy conditions and ever-present floodlights.

When play did get under way at 2pm the batsmen were immediately rustier than the bowlers, Rory Burns leaving the fourth ball of the morning from Kemar Roach and surviving a strong lbw appeal by a narrow margin on DRS.

Sibley had no such fortune in the second over of the day, also offering no stroke to his fourth delivery but this time paying with his stumps as Shannon Gabriel shaded it in off the pitch.

After waiting the best part of six months to play a shot in anger, he was walking off having declined to do so. As if to compound his frustration another shower forced the players off at the end of the third over.

The second passage of play was even briefer, consisting of just seven balls, one of which Joe Denly mishit just short of mid-on.

A third and final burst of activity was possible before bad light and drizzle brought the curtain down for good, during which Burns and Denly ensured no further losses.

Burns, back after rupturing ankle ligaments on the eve of the New Year Test in Cape Town, nudged the first boundary of the season through mid-wicket at 3.35pm and drilled powerfully past point as he reached 20 not out.

Denly was less at ease, beaten on the outside edge a handful of times and edging Gabriel wide of third slip on nine, but he made his way to 17 not out to give himself another chance to impress on day two.