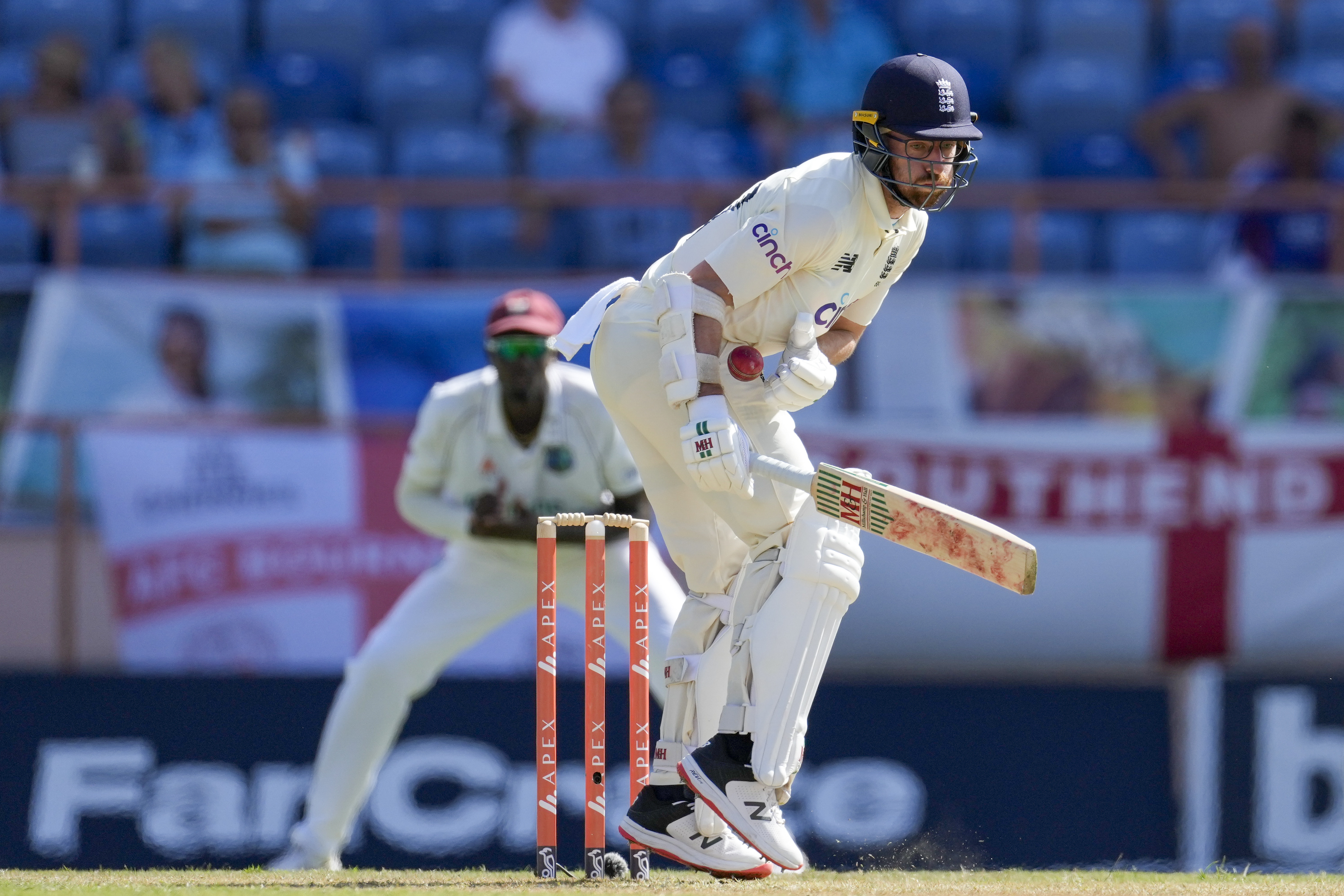 Another England batting flop on day one of their series decider against the West Indies was offset by a last-wicket stand between Jack Leach and Saqib Mahmood that dragged them back from the brink.

After two dead pitch draws in Antigua and Barbados, the tourists had hoped for a livelier surface in Grenada but found their top order wanting when it arrived.

England were circling the drain at 67 for seven in the afternoon session, with opener Alex Lees the only member of the line-up to reach double figures, but recovered to an unlikely 204 all out on the back of the tail-end tenacity.

Ten and Jack get England out of trouble

The 10th-wicket pair batted for almost two-and-a-half hours for a stand of 90, with Leach making a belligerent 41 not out and Mahmood dismissed for 49 in the final act of the day.

Not only was it a remarkable first Test innings for the Lancashire man, it was also 15 more than his career-best first-class score.

Leach’s batting is still best remembered for his famous one not out in the Ashes classic at Headingley in 2019, but without Ben Stokes to lead the way this time he found a less likely accomplice to save the day.

Having earlier lost a clatter of five for 21 either side of lunch, as well as skipper Joe Root earlier for a duck, the pair salvaged a foothold in a game that could easily have disappeared by stumps.

Home captain Kraigg Brathwaite was brave enough to trust his bowlers after winning the toss and the gamble paid off as the bad habits that wrecked England’s Ashes campaign resurfaced.

Lees and Zak Crawley began by blotting out just under an hour, with the lack of new ball chances surely nagging away at Brathwaite.

But the introduction of all-rounder Kyle Mayers, recalled here in place of spinner Veerasammy Permaul, spared him any further recriminations.

Settling in at a modest pace around 75mph he preyed on Crawley’s cover drive cravings, with his first attempt lobbed gently into the hands of the catcher in front of square.

Mayers followed up with the big wicket of Root, playing in the danger area outside off and nicking through to Josh Da Silva. Mayers signed off after five overs, having yet to concede a run.

A third wicket just before lunch made it the Windies’ session, Jayden Seales roaring back into the attack to pin Dan Lawrence in front of leg stump to leave England hanging in at 46 for three.

With a period of stability badly needed, they instead plunged themselves into strife.

Hopes of a Stokes bailout came crashing down when an attempted pull duffed off his top edge and sailed straight back to Alzarri Joseph as he followed through.

By the time Lees and Jonny Bairstow both succumbed to outside edges, with Joseph and Kemar Roach happily hunting as a duo, England had lost three wickets in 10 balls without adding to the scoreboard.

The West Indies did not allow the intensity to dip and soon had the timbers tumbling as they made the most of some handy movement off the pitch.

Seales thundered in to bowl Ben Foakes through the gate, picking a yawning gap between bat and pad, before Roach performed a similar trick to oust Craig Overton for 14.

The latter had at least shown some care and attention to stem the streak of single-figure scores, with Chris Woakes following suit for 25 before he was cleaned up by Seales’ second ball after tea.

The innings may have reached a much swifter end had Leach’s edge off Joseph been held by Mayers at slip, but it would prove to be a damaging drop.

His partnership with Mahmood began as an irritation and escalated bit by bit as the ball softened and the bowling became weary.

Mere survival gave way to something more ambitious as the sideways movement dried up, with a few overs of part-time spin failing to shift the balance.

Leach clubbed Jason Holder for a boundary with a flourish the bowler will not remember fondly and, after being put down at point on 15, Mahmood brought up the 150 by slugging Mayers for six over long-on.

England had already exceeded their worst fears but the 10th-wicket stand lived on despite the arrival of the second new ball, ticking past 200 when Mahmood crunched Joseph to the ropes.

He was dreaming of a maiden half-century but came undone at the last moment, bowled by Jermaine Blackwood in the closing over.