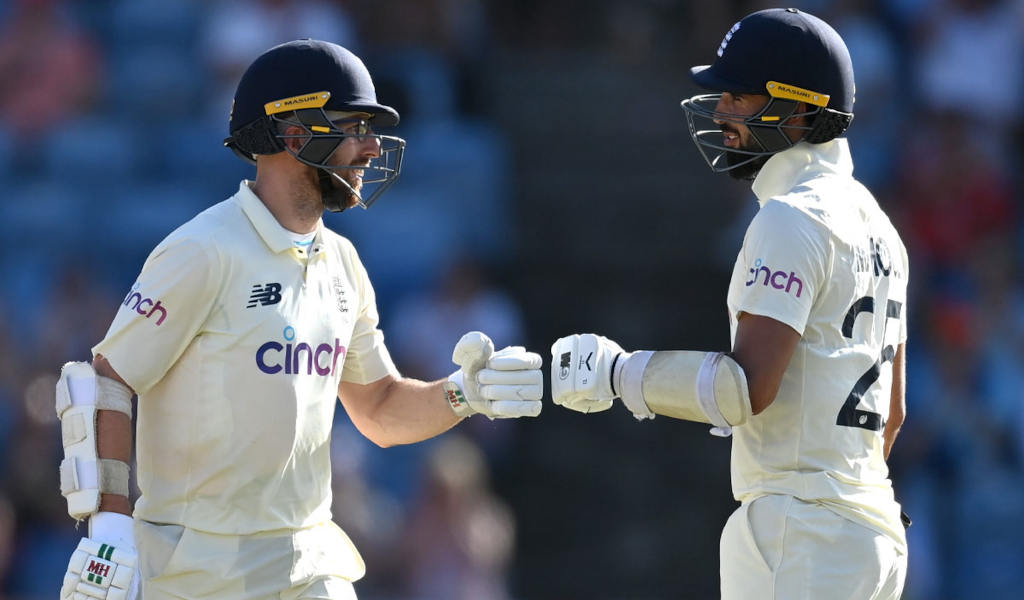 Saqib Mahmood bailed England out with the best batting performance of his career, proving his team-mates wrong for a lack of faith in his last-wicket stand with Jack Leach.

Mahmood’s first Test innings saw him share a stand of 90 with his fellow tail-ender, ushering the tourists to 204 all out after the top seven capitulated on day one of the series decider in Grenada.

He was dismissed in the final over of the day for 49 – his highest ever score in professional cricket and 15 more than his previous best in the first-class game.

While he and Leach turned the third Test on its head, lifting England towards respectability from the brink of embarrassment, it was apparent that there was some doubt in the away dressing room.

As Mahmood came out to bat there was plenty of activity on the England balcony, with a handful of players emerging in their whites in preparation for seemingly imminent fielding duty.

Instead, they watched Mahmood and Leach bat together for almost two-and-a-half hours.

“I had a glance over later to see if some had taken them off but they left the whites on throughout. It was good fun out there with Leachy, it was a case of being disciplined out there and hitting the bad ball. We knew they’d get to a stage where the sting was taken out of their attack.

“It could have easily fallen into pieces after the start we had in the first two sessions but we stuck at it well.”

Mahmood was in buoyant mood after his unexpected role with the bat, which included a first six in red-ball cricket.

Recalling the sweet strike off Kyle Mayers, who had earlier taken two wickets for no runs in his first five overs, he said: “A one stage I faced 25 or 30 balls without getting a run, then I got dropped and I just thought ‘I’m gonna take this guy down’.

“But it would have been nice to get 50. I got a bit of tunnel vision and probably took my eye off the ball.”

West Indies quick Jayden Seales admitted his side were disappointed to see England get out of jail after almost throwing the game away in the first two sessions.

“It was definitely frustrating. We were looking at getting them out for 150 at most and I think we let them off the hook,” he said.

“On this wicket, that is actually a decent score. I think later in the game, it might go up and down with variable bounce. It’s game on.”