Stokes and Buttler drag England to a genuinely decent day 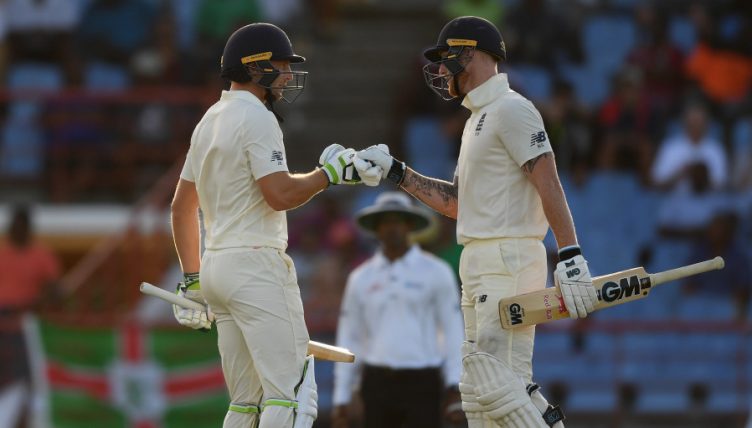 Everyone will remember where they were when England batted through the day on their 2019 tour of the West Indies, with only a relatively small amount of help from some morning rain and more tardy over-rate antics from the hosts.

The formalities of removing England’s sacrificial top three took far longer than expected, a bereft Keaton Jennings somehow lasting 43 balls of an ordeal that often appeared to be veering close to cruel and unusual on his return to the team and a whopping 69 runs on the board before Rory Burns and Joe Denly fell in the space of seven balls. That seemed set to signal a return to normal service, a sense that only grew when Joe Root edged a rank long-hop through to Shane Dowrich just before tea.

Root’s dismissal prompted the usual flurry of anger from people who we have to assume genuinely believe the correct score at the end of day one of a Test match to be 0/0. Root’s mistake wasn’t in deciding to try and cut such a ball for four; his mistake – and in many ways it’s a far bigger one – was in making such a bollocks of it.

His innings today was a painful grind. An imperious cover-drive proved a false dawn as, for the most part, he looked entirely out of nick and rhythm. His trigger movements are all over the place.

At his best he almost dances into position, his back foot moving first, straight back towards his stumps, and then his front dragging back to meet it, getting him on the balls of his feet and poised to pounce. There’s a fluid rhythm to the way Root moves forward and back and it’s just not there right now.

The great players always seem to have that split-second more time to do everything; Root at his best has that. But in this series his back foot is moving not just back towards the stumps but also towards square-leg.  You hate to say it because it plays into the hands of some of the game’s dullest observers, but it’s a wrinkle that may very well have entered his game during his Big Bash stint. The follow-up movement of his front foot is happening a fraction of a second too late. The combination of one move in slightly the wrong direction and one at slightly the wrong time is to destroy that precious rhythm that elevates Root above his England peers.

He’s moving through the wrong plane, fine-leg to long-off rather than straight up and down the wicket. He’s getting himself in slightly the wrong position and getting there slightly too late. The illusion of that extra time is broken. Everything suddenly looks rushed. It was no huge surprise that his demise when it came was down to being ever so slightly late on the ball. Fine margins are everything in this sport.

And that was shown once again as Ben Stokes and Jos Buttler batted through the entire evening session before the light eventually faded.

Stokes, back in his ideal role of fourth seamer batting at six, overcame a slightly iffy start including an umpire’s call lbw reprieve and a crooked inside edge over the bails to play with a combination of authority and security unmatched by any other England batsman at any time in the series. Which is meant as higher praise than the bread-is-the-best-bit-of-a-sh*t-sandwich backhander that it sounds.

But he was spared by Alzarri Joseph’s heel and the 2017 rewrite of the laws on 52 when he drilled a pull shot back at Joseph, who held on brilliantly in his follow-through. “Catch it or it destroys you,” as the excellent Ian Bishop drolly observed on commentary. Joseph, though, had overstepped. By the time this was discovered Stokes was already back in the changing room and may have had to extract his bat from whatever corner he’d hurled it to in order to make a slightly sheepish return to the middle as Jonny Bairstow grinningly made the reverse trip. Before the law was tweaked in 2017, Stokes’ departure from the field of play would’ve left him unable to return.

That moment reminds me of a beer match a few years ago when a batsman was incorrectly adjudged LBW ('umpire' didn't know the rules/coked out of his mind). Fielding side conferred and decided to call him back.

Unfortunately, he had already chucked his bat into a river.

While a true comedy cricket great like Stuart Broad would of course have got out again to the very next ball, Stokes instead got his head back down and battled through to the close. Buttler followed him to 50 and the pair shared England’s first hundred partnership of the series.

Even without the batting disasters of Barbados and Antigua, even without the worst top three England have selected since at least the 80s, this was a fine effort. On a fair but not flat pitch and a desperately slow outfield – the groundsman seemingly more interested in cutting pretty shapes into the grass than actually removing any – 231/4 from 83 overs looks well above par.

While Buttler and Stokes deserve credit, there was a perhaps inevitable drop in intensity from a West Indies side without their inspirational captain and with the series already in the bag. Jennings, Burns and Denly unexpectedly protecting the middle order for more than 30 overs shouldn’t be forgotten.

England may have pulled a Homer with this team, Jennings’ ludicrous recall the sort of England Disaster Tour selection that normally only four Tests in Australia can achieve. Burns, Root and James Anderson are the only three players selected in the same role for all three Tests of this series as England desperately strive to find a formula that works, or at least doesn’t go more wrong than any other series for 130 years.