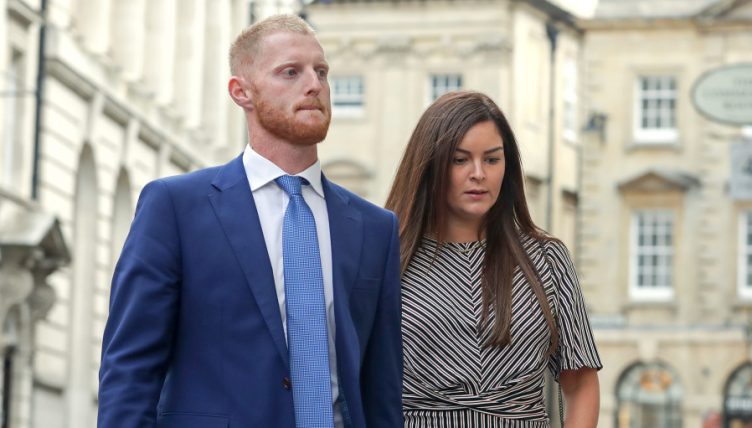 England all-rounder Ben Stokes and his wife Clare have shot back at allegations the couple were involved in a physical altercation at the recent Professional Cricketers’ Association awards ceremony, branding the story as “totally irresponsible”.

The 28-year-old Durham player was honoured for those achievements by scooping the Reg Hayter Cup at a gala dinner in London on October 3.

On Tuesday afternoon, pictures emerged of Stokes and his wife Clare appearing to become involved in a physical confrontation during the event at the Roundhouse in Camden.

However, Clare Stokes swiftly defended her husband in a Twitter post, which included a photo of her “squishing up” the cricketer’s face as a sign of “affection” as well as one of them together at the awards night.

Unbelievable what nonsense these people will make up! Me and Ben messing about squishing up each other’s faces cos that’s how we show affection and some pap tries to twist it in to a crazy story! And all before we then have a romantic McDonalds 20 mins later! @benstokes38 pic.twitter.com/1HmPV1ZfxG

“Unbelievable what nonsense these people will make up!” she wrote.

“Me and Ben messing about squishing up each other’s faces cos that’s how we show affection and some pap tries to twist it in to a crazy story! And all before we then have a romantic McDonalds 20 mins later!”

The New Zealand-born cricketer responded to his wife’s tweet with a face blowing a kiss emoji.

Stokes later gave a statement to the Daily Mirror in response to the allegations and paid tribute to the “wonderful relationship” he and his wife enjoy.

“I have become used to people making stuff up about me, but of all the topics not to mess with domestic abuse has to be at the top of the list,” the England all-rounder told the Mirror.

“It’s an incredibly serious issue for thousands of women – and men – who do suffer domestic abuse.

“For it to be toyed with for cheap headlines in this way just damages the cause of those who are abused.

“Clare is a strong, independent woman who can speak for herself.

“We have a wonderful relationship and I never tire of saying how lucky I am to be with her. We both had a great night at the PCA Awards, ending with us dining out at McDonald’s together.

“To falsify and spread these kind of allegations so willingly is totally irresponsible. The way that this has come across is so far removed from what it was.

“It was a stressful 45 minutes for us when we found out, but we wanted to address it as quickly as we could.”

The England and Wales Cricket Board said it had been in contact with Stokes and his wife, as well as others at the awards, and was satisfied with “the innocent context” behind the pictures.

Chief executive Tom Harrison said in a statement: “We have spoken with both Clare and Ben – as well as others in attendance – who have all clarified the innocent context behind the still photographs taken at last week’s PCA Awards.

“Whilst it is not the case here, we recognise that for the millions who are impacted by domestic violence, this is a very real and serious issue.”