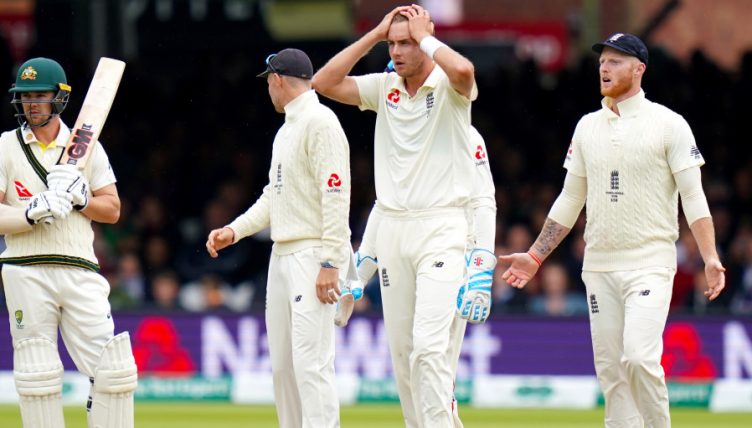 England seamer Stuart Broad lamented the fact that bad weather cost England two sessions in their quest to regain parity in the Ashes series, but remained upbeat about the prospect of England coming out victorious at Lord’s over the next two days.

After a circumspect morning, England roared into life taking a trio of Australian wickets in the form of Cameron Bancroft (13), Usman Khawaja (36) and Travis Head (7).

Overcast skies provided excellent bowling conditions for England’s seamers, but just as the home-side began to build momentum, Mother Nature brought a halt to proceedings after just 24.1 overs bowled on the day.

No play occurred following lunch, which left the contest delicately balanced with Australia still trailing by 178 on 80-4, but increased the chances of the match ending in a draw unless either side suffers a batting collapse in their respective innings’ over the weekend.

Speaking on the inclement weather and England’s chances of securing victory, Broad told Sky Sports News: “There’s not a lot we could do about the weather, they were good conditions for bowling this morning and we’d like to have continued, that morning session got us into a really strong position.”

“We’re pretty positive. We’d need to bowl Australia out by lunch tomorrow. There’s 98 overs for the next two days, which for both teams has been enough to bowl each other out.

“There’s certainly hope for both sides. There could be quite an intriguing game left in this Test match.

“Our bowling unit’s aim is to get the next six wickets by lunch and then I suppose ideally bat until half-an-hour before lunch on day five and try to force a result that way.”

Broad has a new new-ball partner this Test in the form of World Cup hero Jofra Archer.

Speaking on the impact the Barbadian-born paceman can make in this series and beyond, Broad said: “He’s got all the attributes and he’s already been a successful international cricketer, having been involved in a World Cup win.

“In our minds, because he’s been involved with the World Cup and he’s been talked about so much in the last six months, we think he’s an experienced, older, knows-it-all cricketer.

“He’s still learning his trade a little bit, but he’s doing it with great success. There will be times when he blows teams away.”