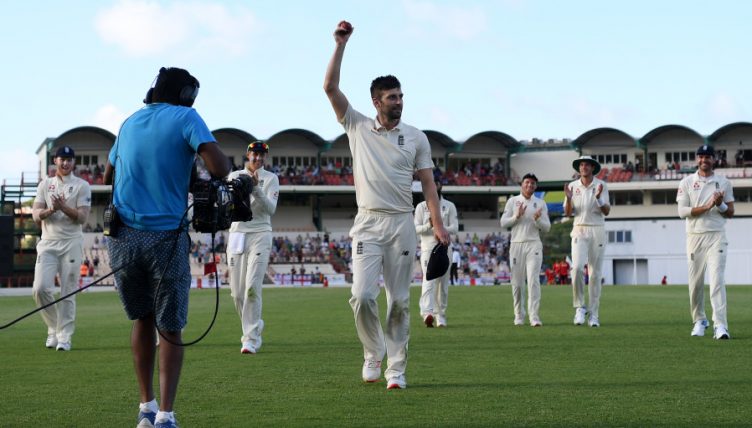 Let’s get the England collapse out of the way: six wickets for 45 this morning as the efforts of Stokes and Buttler on day one were largely pissed away.

The first (not the last) significant contribution of the day from Mark Wood came with an all-run four from the first ball he faced, giving him briefly the glorious analysis of four not out from one ball at a strike-rate of 400 with no fours. It was easily his most interesting stat of the day in our opinion.

West Indies then compiled another half-century stand for the opening wicket. They really have handled Anderson and Broad’s new-ball bursts superbly well in this series.

Then it went wrong for the Windies. Kraigg Brathwaite gifted his wicket to Moeen Ali, who promptly snared John Campbell lbw the very next ball.

Mark Wood was also on a hat-trick after having Shai Hope and Roston Chase caught by Rory Burns at gully from successive deliveries.

Wood became the first England bowler since Andrew Flintoff to clock 95mph in a Test match. He bowled three overs before tea of absolutely searing pace, with Shimron Hetmyer also unable to handle the heat and edging to Joe Root at slip.

Darren Bravo fell to Wood shortly after tea, Root again with the catch. Wood then returned to complete his first five-wicket haul in Tests by yorking Shannon Gabriel.

Wood deservedly takes the headlines, but a word for Moeen Ali. He started the collapse and finished with 4/36 thanks to a routine stumping and a non-routine catch from Stuart Broad, one-handed running back from mid-on. At no point did Broad ever look like holding it until inexplicably he did.

Moeen has now taken 41 wickets at 22.63 in seven-and-a-half Tests since his recall in the summer. We’ll not mention his batting.

England took four hours to bowl 47.2 overs. Luckily, nobody has been talking much about over-rates in the last few days, so probably nobody noticed.

West Indies’ score of 154 is their first total lower than any of England’s in the series to date. England’s best is their 277 today, West Indies’ previous worst the 289 in the first innings in Barbados.

Rory Burns and Keaton Jennings survived 10 overs before stumps, and did so with remarkable ease given their own struggles and the fact 16 wickets had fallen in the day.