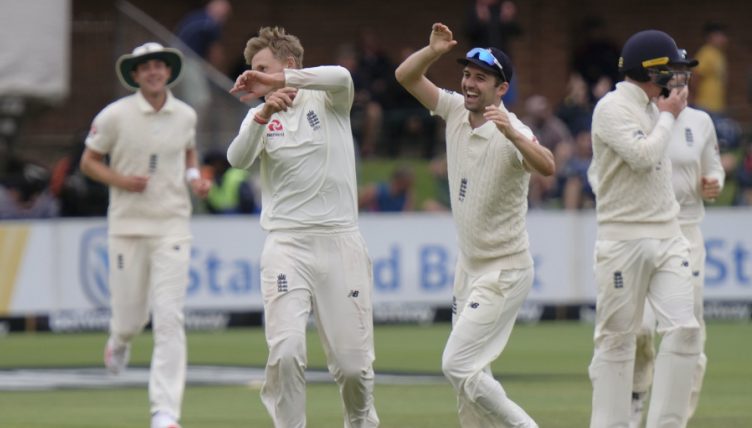 England speedster Mark Wood urged the celebrations to be put on hold after warning that there is still “plenty of hard work ahead,” and made a cheeky jibe at Joe Root’s expense following the skipper’s career-best bowling figures on day four.

The day began with England wrapping up the South African tail in rapid fashion, with three of the four wickets to fall resulting in cartwheeling stumps.

The tourists enforced the follow-on for the first time in an away Test since Wellington, 2013, and duly continued where they left off.

A further six wickets fell either side of a lengthy rain delay around lunch to leave South Africa reeling on 102/6 and England on the verge of victory heading into day five, weather permitting.

Root was the unlikely star of the show with the ball, returning figures of 4-31 with all four scalps those of recognised top and middle order batsmen.

Speaking to Sky Sports following the close of play, seamer Wood said:”Broady and Sam really stood up this morning and I thought – obviously Broady started off brilliantly – but that was a massive wicket for Sam to get De Kock.

“Since then, it’s not been an easy game with rain breaks, but our attitude’s been good today and we got our rewards.

“I was dreaming (towards the end). I thought I could have got a couple at the end. It’s not been a pitch where you blast people out.

“I know this morning we took some quick wickets but it doesn’t feel that type of wicket so there’s plenty of hard work ahead.”

On captain Root’s bowling spell, Wood added: “At times he gets key wickets and he bowled at the right end (laughs) and put (Dom) Bess at the other end – where it wasn’t turning as much – and he took the captain’s end and he bowled really well.”