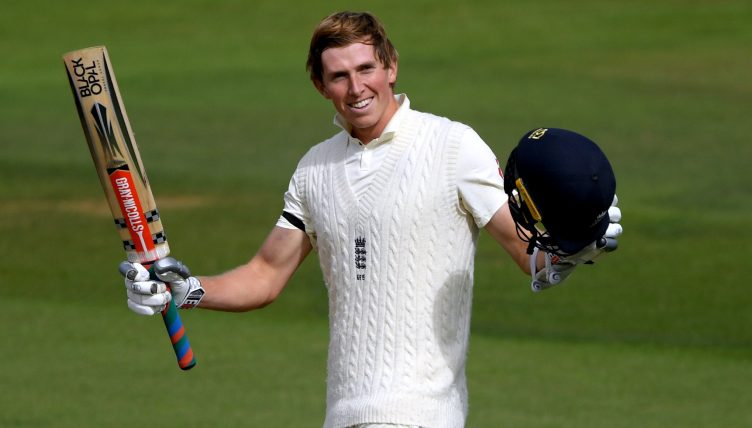 Zak Crawley produced a magnificent maiden international century then drove on to 171 not out to dominate the first day of England’s series deciding third Test against Pakistan.

The 22-year-old, who had a top score of 76 in his first seven appearances, admitted last week that he had been dreaming about making a hundred for his country and “pinched himself” at the thought.

His hopes became reality as he led the side to 332 for four at Ageas Bowl with a deliciously elegant innings that saw him master the touring attack for the majority of the day, hitting 19 boundaries and facing 269 deliveries.

It was a knock that any batsman on the planet would have cherished, not least a player with only three first-class centuries for Kent on his CV and one who had been left out of back-to-back matches this summer to accommodate an extra bowler.

He owed his recall to Ben Stokes’ absence for family reasons, but even England’s most reliable game-changer could not have produced a better paced effort or a wider repertoire of scoring shots.

Jos Buttler proved a perfect foil, contributing 87no to an unbroken partnership of 205 and sits ideally placed to follow his partner to three figures on day two.

Joe Root started the day by confirming Jofra Archer’s return to the side in place of Sam Curran, but kept the paceman waiting when he chose to bat first. Opening has been a hazardous business for most of the last two months and so it proved once again as Rory Burns followed scores of four, 10 and nought by falling for six.

For the third time he was undone by Shaheen Afridi, with the left-armer serving up a superb delivery that pitched in line and nipped away to flick the outside edge.

Crawley would have been on alert for something similarly challenging but instead gleefully accepted the chance to ping his first ball through square-leg for four. Having scored a low-key 53 in the final session of the drawn second Test, Crawley carried an air of confidence and continued scoring busily. He used his feet well to smother Mohammad Abbas and did not flinch at the arrival of Yasir Shah’s leg-spin after just 11 overs.

Dom Sibley was the silent partner, contributing just 16 to the pair’s 61-run stand, and watching on as Crawley flicked Naseem Shah to fine-leg then pulled him flat through mid-wicket. When Sibley did look to step things up it cost him dear, lbw to Yasir skipping down the track.

Crawley was finally tied up as lunch approached, spending 16 deliveries on 49 before on-driving the last ball of the session for four to break the spell. Resuming on 91 for two, Root took the lead for England, forcing Naseem Shah off his length and rushing to 29.

When the teenager’s response came it was more than good enough, a full delivery drawing the captain in then clipping the bat as it seamed away. Ollie Pope’s dismissal made it 127 for four, Yasir skidding one into the stumps after foxing him on the back foot for the second match in a row, but Crawley rose to the growing responsibility.

He drove with polish and only once lost his composure, grateful to see a top-edged pull off Shaheen drop safe. Crawley took tea on 97 but showed no nerves as he converted in the first over after the restart.

The broad smile and gleeful kiss of the badge told a story, with his team-mates providing the acclaim in lieu of an absent crowd. Buttler had been a perfect foil either side of tea, striking four boundaries before the break and then going hard at Yasir afterwards.

He clobbered the leg-spinner for 16 in a over – including two sixes on the charge and hurried to his own 50.

Pakistan started to flag, fielding raggedly and struggling to dry up the runs, and Crawley happily worked through his shots as he turned 100 into 150 in just 62 deliveries. Twice he middled sweeps for four off Yasir, one a nimble reverse the other a more traditional blow.

The tourists looked to the new ball to ease their suffering at the end of the day but their seamers drew a blank, Buttler carving one wider ball over the cordon and seeing another edge fall short before ending strongly.

Crawley ensured he would also get the chance to go again on Saturday, with England looking to the duo to set the base for a 2-0 series win.