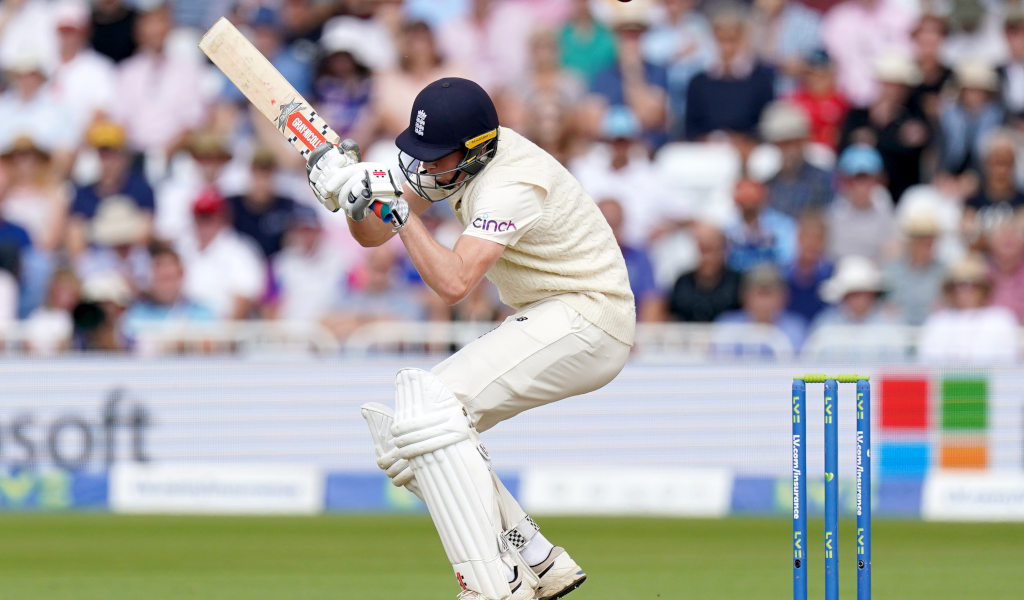 Zak Crawley’s long wait for a second Test century finally ended as he and Joe Root filled their boots and ushered England away from danger on day four against the West Indies.

Nineteen months on from his star-making knock of 267 against Pakistan, Crawley finally had the chance to raise his bat aloft again in Antigua, cashing in on a lifeless surface that looks highly likely to deliver a draw.

Crawley had been picked out by Sir Vivian Richards – the Caribbean great for whom this stadium is named – as one to watch in this first Test and he ensured the tip came good with a dashing, unbeaten 117.

With Root contributing 84no to a dominant stand of 193, the tourists turned an awkward 64-run deficit into an overnight lead of 153.

Rain stalled their serene progress, leaving England on 217 for one, and although victory may be a push given Mark Wood’s elbow injury, there is at least a chance.

Root’s runs were almost predictable, with the England skipper coming off a bumper year where he averaged 61 and made six hundreds, but Crawley’s recent past is a more turbulent affair.

Ever since his career-high knock at the Ageas Bowl in August 2020 he has struggled dreadfully, averaging a barely believable 10.81 last year and, prior to this knock, spent 21 innings unsuccessfully searching for a repeat performance.

He was dropped by a reluctant management team last summer, partially for his own good, but returned mid-way through the Ashes as others suffered similarly. Here he showed why.

Of all the openers who have tried and failed to lock down a place in England’s revolving top order he has the broadest range of shots, the sweetest timing and the biggest ambitions. Too often that has got him into trouble, with errant drives and edges a frequent part of his downfall.

But here it all came together with 16 boundaries and sounder judgement outside off stump.

Crawley did not have to wait long for his chance, Jack Leach bringing a marathon West Indian innings to a close when he had Jayden Seales lbw with the third ball of the morning. That capped the lead at 64, not huge but still the kind of figure that can spook opponents short on confidence.

With so many top-order collapses – not least on the first day of this match, when they slipped to 48 for four – England fit that bill.

Though it would later become a footnote of his innings, Crawley was given out second ball for nought as he stepped across a full, swinging delivery from Kemar Roach. A DRS referral meant the error was quickly corrected, with the ball destined for the leg side, and he was soon pinging a couple of boundaries off his toes.

Debutant Alex Lees had no such reprieve. Eager for a score after making four in his first attempt, he was trapped flat-footed by Roach from the round the wicket and wasted a review trying to save his skin.

Crawley made easy work of scoring after seeing off the hard Dukes, scoring with a freedom that the West Indies were unable to capture on a slow, grinding third day.

After being hit in the mid-riff by Jason Holder he stood up tall to the next bumper and thrashed it through mid-wicket for four.

He milked Veerasammy Permaul’s spin with enterprise, slapping anything wide through point and even lapping a boundary over his shoulder.

Root cleared the deficit with a thick edge off Holder and by lunch England were 72 for one, eight ahead. The afternoon session cemented those strong foundations, with another 74 runs chipped away and no further chances offered.

Crawley had one careless moment on 49 when he slashed lazily at Alzarri Joseph and hit fresh air, reacting with a a few angry words of self-reproach. He brought up his half-century in exactly 100 balls, eight quicker than Root who followed close behind, and continued cutting and pulling a frustrated attack.

The West Indies thought a ricochet off bat and boot had stopped his charge on 71, but replays showed the ball hitting the pitch first. Both batters topped up their scores with minimal risk as their partnership crossed 100, then 150 but Crawley’s own century was the crucial landmark.

On 98 he turned the ball for two off his hip, with Root punching the air in joy as he turned for the second. Crawley’s own reaction was more introspective, at least until his captain consumed him with a bearhug.

There are more runs on the table on the final day, but finding 10 wickets may prove an insurmountable task.