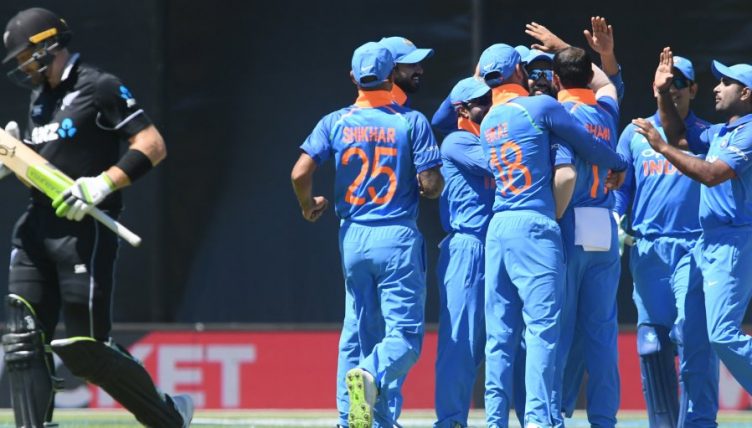 The bowlers did the bulk of the work as India smashed New Zealand by eight wickets in the first ODI at Napier.

India had arrived in New Zealand on the back of a 2-1 victory in Australia, and continued to impress on the road to this summer’s World Cup in England despite sun stopping play during a particularly bright Napier sunset.

Mohammed Shami picked up three wickets, crucially nipping out both the Black Caps’ dangerous openers Martin Guptill and Colin Munro with the new ball before the spinners got to work.

Kuldeep Yadav took 4/39 and Yuzvendra Chahal 2/43 as New Zealand folded to 157 all out despite a lone-hand 64 off 81 from skipper Kane Williamson.

India lost Rohit Sharma in the powerplay but a 91-run stand between Shikhar Dhawan and Virat Kohli ensured India were never under any pressure in pursuit of a revised 156 in 49 overs.

To everyone’s surprise, not least his own, Kohli fell for 45 with the victory line in sight when feathering an attempted pull down the legside through to Tom Latham off Lockie Ferguson but Dhawan saw the job through to end unbeaten on 75 – his first ODI half-century for nine innings – as India got home with 14 overs to spare.

The teams now head to Mount Maunganui for the second and third games of the five-match series on Saturday and Monday.