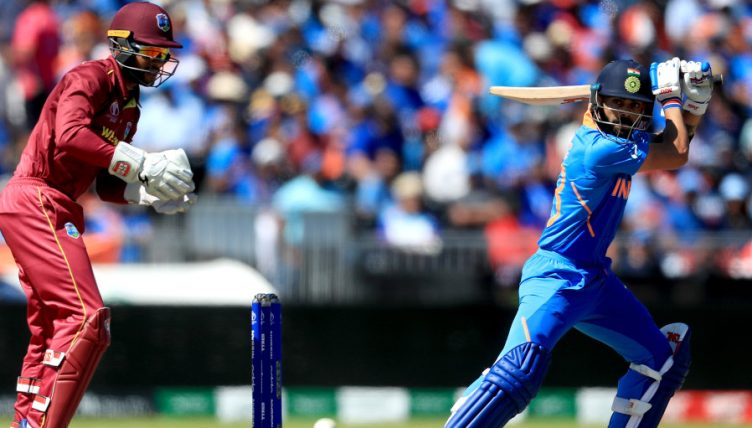 A superb hundred from Virat Kohli powered India to victory over the West Indies in the second one-day international at Port of Spain, Trinidad.

Much had been made of Kohli’s inability to convert fifties into hundreds at the recent Cricket World Cup, but the Indian skipper looked back to his majestic best as his knock of 120 (125) pushed India to a target of 279/7 – a figure the West Indies fell 59 runs short of by via the DLS method in a rain-affected encounter.

Bhuvneshwar Kumar spearheaded the Indian attack in the second innings – his figures of 4 for 31 from 8 overs hampering the Windies ability to chase the target at every step.

The win ensured India cannot lose the three-match ODI series via a one-nil lead with one to play, and safeguarded India’s undefeated streak on the tour, having swept the three-match T20 series three-nil in the first week of August.

Perhaps the bigger story of the match, however, were the number of records that fell or were surpassed.

Another day, another record broken by Virat Kohli 🙌

With his splendid 120 against West Indies, he went ahead of Sourav Ganguly to No.8️⃣ on the list of all-time run-scorers in ODIs.

Chris Gayle, too, overtook Brian Lara to take the 12th spot in the list.#WIvIND pic.twitter.com/HNO6PrKGeO

Virat Kohli moved up into eighth place on the all-time list of ODI run-scorers, leaping ahead of fellow countryman Sourav Ganguly in the process. Sachin Tendulkar’s imposing mark of 18,426 still leads the way by some considerable margin, but at 30-years-of-age, Kohli will back himself to eat up the 7,020-run deficit over the course of the next decade.

Javed Miandad’s mantle of being the highest run-scorer versus the West Indies in ODIs was passed to Kohli. The Indian talisman’s tally now stands at 2,000 runs versus the men from the Caribbean – 70 more than the previous record held by the Pakistani great.