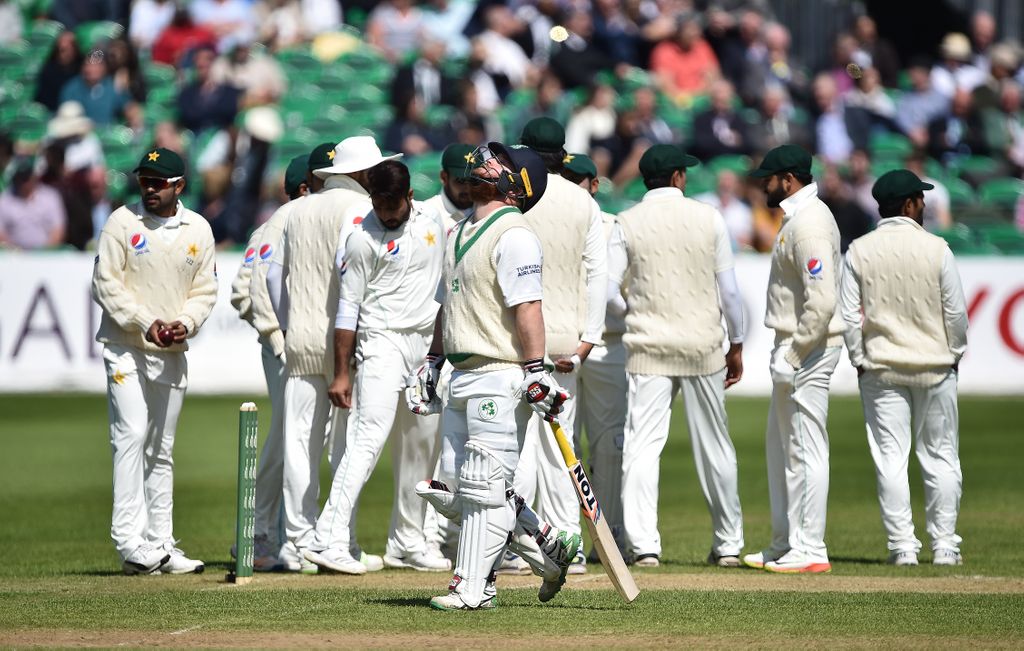 Ireland came to realise the realities of Test cricket after they were made to follow-on on the third day of the one-off Test against Pakistan at Malahide on Sunday.

After Pakistan had declared their first innings on 310/9, Ireland were skittled out for 130 before replying solidly in their second innings as they were 64/0 at stumps.

The hosts stuttered to 7/4 at one point in the first innings as Pakistan’s seamers took advantage of helpful conditions.

Ed Joyce (4) was trapped in front by Mohammad Abbas who also accounted for Andy Balbirnie and Niall O’Brien, both for ducks, as the Irish made a terrible start with the bat.

Between those strikes, Mohammad Amir bowled William Porterfield (1) to leave Ireland to face the harsh realities of the longest format.

Kevin O’Brien (40) and Gary Wilson (33 not out) at least showed some resistance but Paul Stirling (17) gave his wicket away when he became Faheem Ashraf’s maiden Test wicket.

Eventually Ireland were bowled out after facing only 47.2 overs in their first innings with Abbas the pick of the Pakistan bowlers with 4-44 in 11 overs while leg-spinner Shadab Khan finished 3-31.

Facing a deficit of 180, Pakistan captain Sarfraz Ahmed enforced the follow-on but Ireland gave a much better showing with the willow second time around as openers Joyce (39 not out) and Porterfield (23 not out) took them to the close, still 116 runs adrift.

Earlier, debutant Faheem scored 83 and Shadab 55 as Pakistan went from their overnight total of 258/6 to declare on 310/9.

Ireland seamer Tim Murtagh finished with figures of 4-45 in 25 overs and Stuart Thompson 3-62 as the home team’s bowlers can look back at a satisfactory first innings in the field in the longest format of the game.