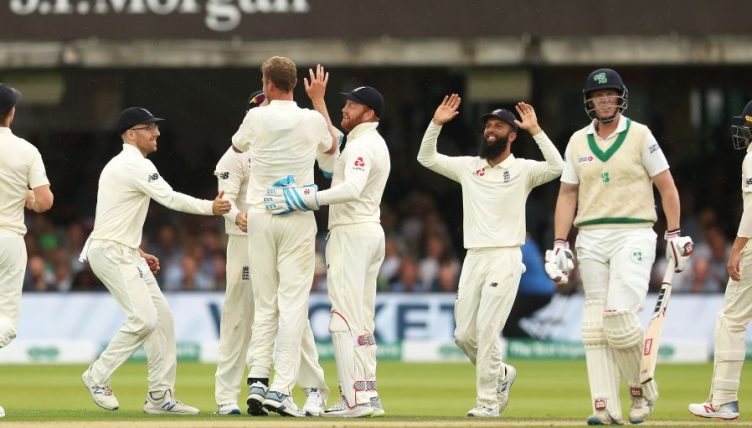 One regular day of Lord’s. That’s all I ask for. Will never happen.

For Ireland, utter heartbreak. It’s tempting to describe this as a lesson in the cruelties of Test cricket, but even Test cricket is rarely as harsh as this. For most of the previous two days, Ireland had been the better side. It was all reduced to nought in 94 balls.

But just as England should fret less about the 85 all out than the second-innings collapse from 171/1 to 248/8 so too Ireland may come to look back at the addition of a mere 80 runs after taking tea on day one at 127/2 in their first innings.

Not only did their post-cuppa capitulation rob them of the opportunity for utter dominance on the scoreboard, it would ultimately condemn them to being thoroughly on the wrong end of conditions for the final two days. Bowling in Thursday’s broiling heat and batting under heavy, dark, low clouds between the showers on Friday. Inevitably, the sun came out for William Porterfield’s post-match interview.

England, having spent two days doing spectacularly England things, made no change to that plan today. While the batting so often and so understandably takes the plaudits, one of this great comedy side’s finest comedy bits remains their ability to lurch from mesmerizingly unplayable with the new ball to infuriatingly wasteful.

In keeping with the match’s overall arc, England produced the goods at both extremes. Profligate and wasteful on Wednesday – unforgivably so having just been treated to a masterclass from Tim Murtagh and Mark Adair (who was the biggest positive of all for Ireland during these two-and-a-bit days) – and outrageous today.

Stuart Broad had one of those Stuart Broad days that come when for whatever reason he is suddenly and consistently able to pitch the ball up and make it dance. He was only denied an astonishing eighth five-wicket haul from a single Test spell by Chris Woakes having an even more Chris Woakes day.

The biggest disappointment of the first innings, he put that spectacularly right with 6/17 here to join Murtagh in not only going on the Honours Board but doing so with eye-catchingly outrageous figures.

Like Murtagh, Woakes at his best is an absolute Lord’s grandmaster. He now has 24 wickets in four Tests here at an average below 10, and 54 wickets at north of 40 in his other 23. Woakes also averages 68 at Lord’s with the bat. In keeping with the bizarro upside-down world in which England now operate, it would make perfectly reasonable sense to leave him out of the first Ashes Test at his home ground next week yet be utter madness not to recall him for the second at HQ.

Manipulating the ball this way and that under the floodlights, Woakes asked questions to which Ireland’s batsmen simply had no answer. In that, there was no disgrace. Plenty of sides would have been staring at 40/5 in these conditions against that bowling. Australia are one of them. England another.

It was a timely reminder that whatever is wrong with the batting, England possess the bowling to keep them in almost any game as thoughts turn decisively to the Ashes. Olly Stone was mighty impressive in the first innings yet not required here; Sam Curran has a golden arm. James Anderson and Jofra Archer both exist.

With Australia showing their own hand by naming seven fast bowlers (albeit of mixed pace and ability) and no second frontline spinner in their Ashes squad, day three and day four ticket-holders are entitled to be nervous.

But at least England have the Ashes to look forward to. For Ireland, this chance will not come around again for at least four years. Shamefully, there are no more Tests against England in the current Future Tours Programme and only seven altogether in the next four years now Zimbabwe are out of the equation.

With Ireland’s players soon to find the county cricket door closed, the challenge for Irish cricket is to become a capable Test side while feeding on scraps. That;s likely to prove every bit as testing as facing Chris Woakes and Stuart Broad under oppressive Lord’s skies.