Home Countries Bairstow back with a bang for England in Colombo

Bairstow back with a bang for England in Colombo 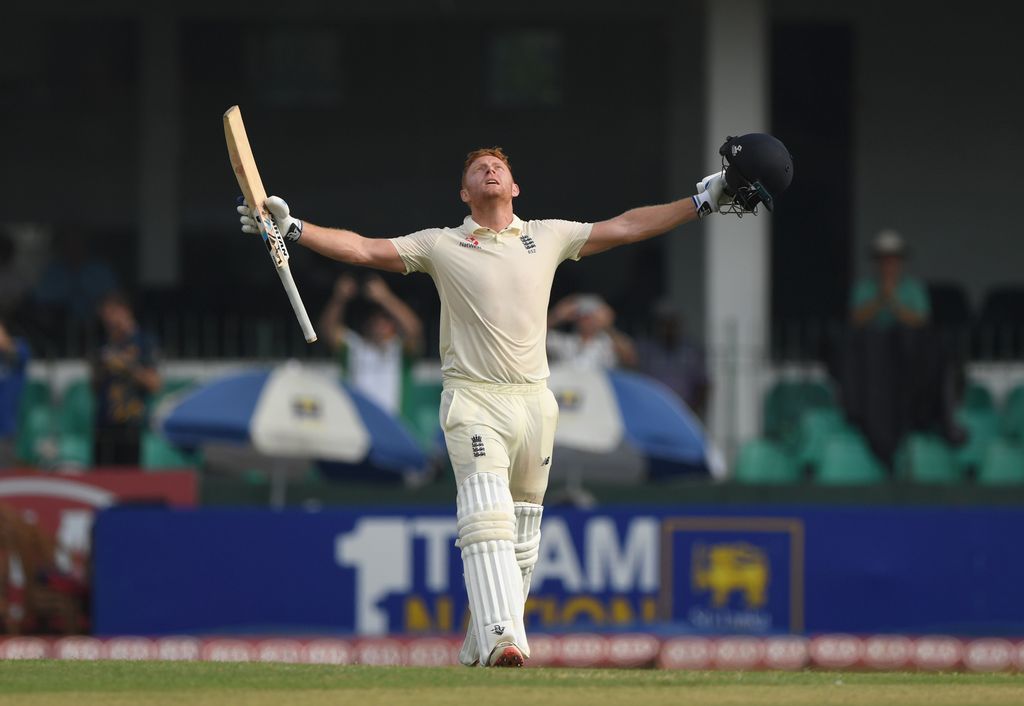 Jonny Bairstow scored his sixth Test hundred on his return to England colours as the visitors closed day one on 311 for 7 in the third and final Test of the series against Sri Lanka at the Sinhalese Sports Club in Colombo.

However, despite key contributions from Ben Stokes (57) and captain Joe Root (46), England will feel they have let a great opportunity for a big first innings total slip as they lost four wickets in the evening session.

This Colombo pitch was, prior to the tour, supposed to be the one which gave the pacemen some assistance; the possibility of playing more than one front line seamer seemed higher here than at the other two venues.

However, during in the build-up to the game home captain Suranga Lakmal had admitted that he was expecting just as much turn as in Pallekelle, and as a result both teams stuck with the one-seamer option.

Root won his scarcely believable eighth toss in a row, and England batted first, having made two changes from their series-clinching performance in Kandy; Stuart Broad in for the rested James Anderson, and Bairstow in for the injured Sam Curran.

Bairstow was also moved to the unfamiliar position of number 3 in the batting order, with a reshuffle seeing Stokes moved back into the middle order.

Incidentally, it means Stuart Broad will bat at number eleven; only the second such instance in his long career; a remarkable fall from grace with the bat, having spent three Tests back in 2009 batting as high as number seven.

Remarkably, England have not won a series 3-0 away from home since New Zealand in 1963; winning all three tosses here has given them the best possible start in securing a whitewash.

For the first time in the series, neither of England’s openers were able to survive the first hour of their innings.

First, Rory Burns inexplicably missed what appeared to be a simple straight one from off-spinner Dilruwan Perera for 14, then Keaton Jennings pushed one with the spin around the corner from Malinda Pushpakumara, straight into the hands of the well positioned leg slip for 13.

At the first drinks break of the match, the tourists were 38 for 2 on a pitch that they should have been 38 for none.

Still, two early mistakes from the openers gave Bairstow an early chance in his new position, alongside his Yorkshire teammate Root, who himself was on top form after his man-of-the-match performance in Kandy.

Bairstow is an interesting character to try and dissect. This week he has been rather vocal in both his willingness to bat anywhere to get back into the team, whilst also expressing his frustration at losing his responsibilities behind the stumps and a desire to win them back in the future.

What you cannot question about Bairstow however is his class. If this England team is to continue the path they have forged for themselves in Sri Lanka and play aggressive yet measured cricket in all aspects of their game, they need to make room for guys like Bairstow, he fits the mould perfectly.

On a good wicket here at the SSC, he made seemless progress on a very warm morning. He swept with authority, and showed no signs of a player who has been out of action since the third ODI in Pallekelle on 17th October.

By lunch, he had reached 42 not out off 58 deliveries, including one marvelous hit over midwicket for six, as England reached the interval on 102 for two.

Captain Root was steadfast at the other end on 28 not out. Sri Lanka had already burned both of their innings reviews within 23 overs after they thought they heard an edge of Bairstow’s bat when on 10, then later an unlikely LBW shout to Root which clearly struck him outside the line.

As the sun beat down during the afternoon session, England’s progress continued. Bairstow passed fifty with a sweep to deep square leg, and a short while later the 100 partnership was brought up off 160 balls.

After the two early breakthroughs, it suddenly looked like Sri Lanka were in for a long day at the office.

However, if there is one trait of this new-look England team that is likely to frustrate it’s supporters, it’s their ability to get themselves out foolishly when well set.

As a team they are set on an aggressive style which may yet see them rise to the top of the Test tree (surprisingly they are already up to second after their series win here), but such aggression will at times upset their loyal fans.

Root’s wicket in the afternoon session is a perfect example. He attempted one too many slog sweeps, and could only manage to top edge a harmless delivery from left-arm spinner Lakshan Sandakan, playing in this match as a replacement for Akila Dananjaya, who is getting his bowling action assessed in Dubai, to the grateful hands of Danushka Gunathilaka at midwicket for 46. 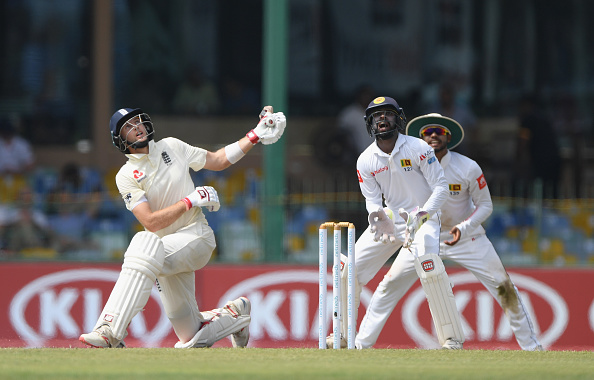 As the afternoon wore on, Sri Lanka were made to pay for their earlier DRS blunders. Stokes looked unusually scratchy early on, and after thirteen deliveries was yet to score, when he went back to a ball that barely turned from Perera.

The home side went up, Chris Gaffaney the umpire rejected the appeal, and with no reviews remaining, later TV replays showing the ball would have hit two thirds of the way up middle and off only serve to infuriate Lakmal’s team.

To rub salt into the wounds, Stokes then calmly got off the mark the very next ball, then began to take control of the session, with a mixture of powerful back foot drives and authoritative sweeps shots.

Bairstow meanwhile, calmly took the many singles on offer, both straight and in front of the wicket, and punished the short ball whenever Sri Lanka’s bowlers strayed in length.

England lost one wicket in the afternoon session, and progressed to 197 for 3 at tea. The Stokes reprieve already looked costly for the hosts, as he went into the break 38 not out, the steadfast Bairstow 81 not out.

Stokes began the evening session in belligerent mood, playing the role of enforcer as the Sri Lanka attack began to toil.

The allrounder smashed Perera over midwicket for six before bringing up his fifty off 78 balls; having started slowly, Stokes was now looked like the dominant middle-order batsman England would love him to be; a long term number five with the ability to dig in when necessary and destroy when capable.

Meanwhile, Bairstow’s big moment came when he swept a single fine off Sandakan to get to his sixth Test century, probably his most important personally, and his first batting in the top three.

A remarkable achievement for someone who doubtless piled the pressure on himself more than anyone outside the England dressing room could ever do; although his stony red-faced stares at the press box in celebrating his ton does make you wonder about how he feels he’s been treated by the travelling media pack.

Just as the Barmy Army had taken their seats from celebrating England’s fourth century of the series, Stokes pushed at a wide-ish delivery from Sandakan and edged to slip.

His was a wonderful 57, however in swishing his bat over the turf in frustration of a poorly chosen shot, it was clear how disappointed he was to get himself out when so well placed.

At 235-4, Jos Buttler joined Bairstow to push home England’s advantage into the evening session. However Bairstow, who had survived a plumb LBW shout on 102, eventually fell for 110; a mixture of heat exhaustion and a desire to push on led him to try to smash Sandakan over midwicket, only to be bowled to give the left arm wrist-spinner his third wicket.

Moeen Ali came to the crease and was given an early life when the ever enthusiastic wicketkeeper Niroshan Dickwella dropped a tough chance off Sandakan.

Up until the evening drinks break, it had still felt like England had much the better of the day so far.

However, despite another healthy run-rate, and some fantastic clean striking, England had continued to lose wickets before really pulling out in front.

Buttler was next to go when he slapped a tame delivery straight back to Sandakan, and from 235-3, England had fell to 265-6, and were in danger of failing to convert a good position into a great one – something of a theme on this tour despite successful results.

Ben Foakes seems much too low batting at number 8, and when he joined Moeen he immediately looked the more settled of the two.

Sri Lanka continued with spin from both ends after taking the new ball, such is the custom on the subcontinent. Moeen survived two further scares when Dimuth Karunaratne dropped a regulation chance at slip off Perera, then later in the same over was saved by the DRS when given out LBW by umpire Gaffaney.

However it was Foakes who was next to fall when he got a fine edge through to the keeper, a little extra bounce doing the trick for Pushpakumara.

With the light fading, Adil Rashid and Moeen took England past 300 in the 86th over, and there was just time for Moeen to survive yet another scare when he was adjudged, again on advice of the video replay, to have got an inside edge on to his pad before being given out LBW.