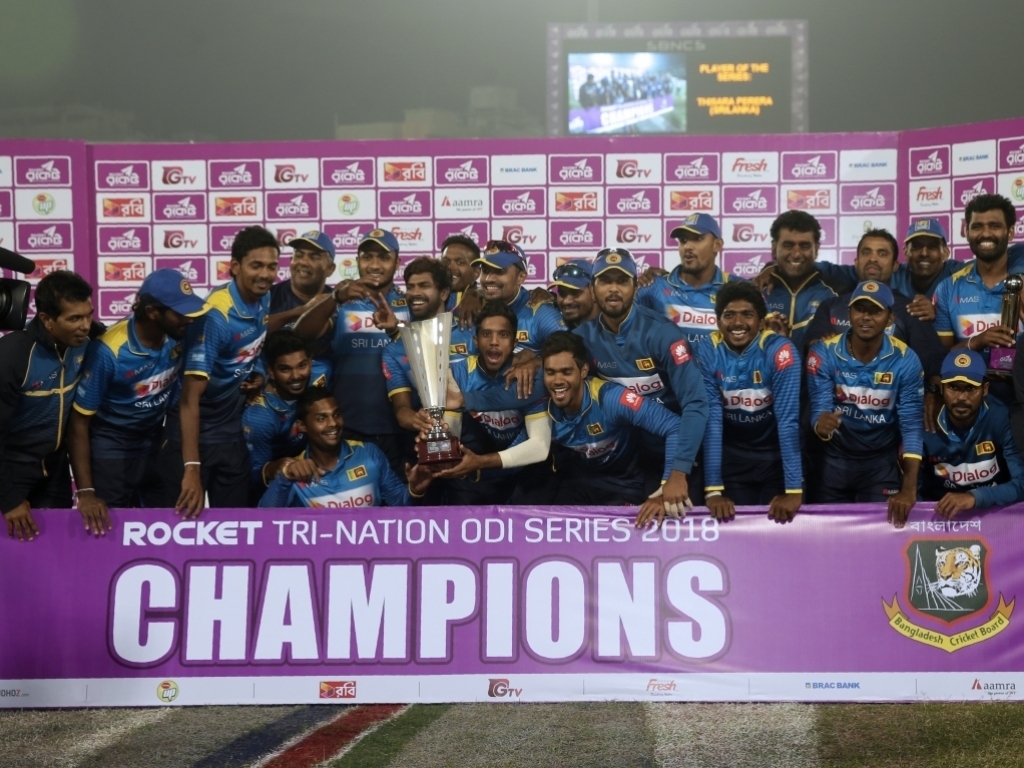 Sri Lanka claimed victory in the ODI tri-series in Bangladesh when they beat the host nation by 79 runs in Mirpur on Saturday.

After winning the toss and electing to bat, the visitors posted a total of 221 all out on a pitch that was slow and fast scoring was particularly difficult.

Sri Lanka opening batsman Upul Tharanga scored 59 off 99 balls that might not have looked pretty but was all the more valuable as he gritted it out.

Niroshan Dickwella (42 off 57) and captain Dinesh Chandimal (45 off 74) were the other major contributors while Kusal Mendis played a cameo innings of 28 off just nine balls to propel the total over the 220-run mark.

Tigers seamer Rubel Hossain was the pick of a disciplined bowling effort by the hosts with figures of 4-46 in 10 overs while left-arm paceman Mustafizur Rahman claimed 2-21 also in 10 overs.

The home team’s run chase was already curtailed before they even came out to bat as star allrounder Shakib Al Hasan was injured while in the field and could not bat.

Tamim Iqbal (3) fell early as Bangladesh slumped to 22/3 inside 10 overs but Mushfiqur Rahim and Mahmudullah repaired some of the damage with a stand of 58 for the fourth wicket.

Sri Lanka spinner Akila Dananjaya got the important breakthrough as Mushfiqur went for 22, as the Tigers were 80/4 after 22.4 overs.

Mahmudullah was the only player that showed a willingness to fight as wickets fell around him, the right-hander making his way to 76 before he became part of a hat-trick taken by debutant seamer Shehan Madushanka that finished the game.

Madushanka ended with figures of 3-26 while Dananjaya and paceman Dushmantha Chameera picked up two wickets each.

The victory will be especially sweet for the Sri Lankans as they lost their first game of the tournament to Zimbabwe and it will give them good confidence going into the two-match Test series against Tigers, starting on Wednesday.