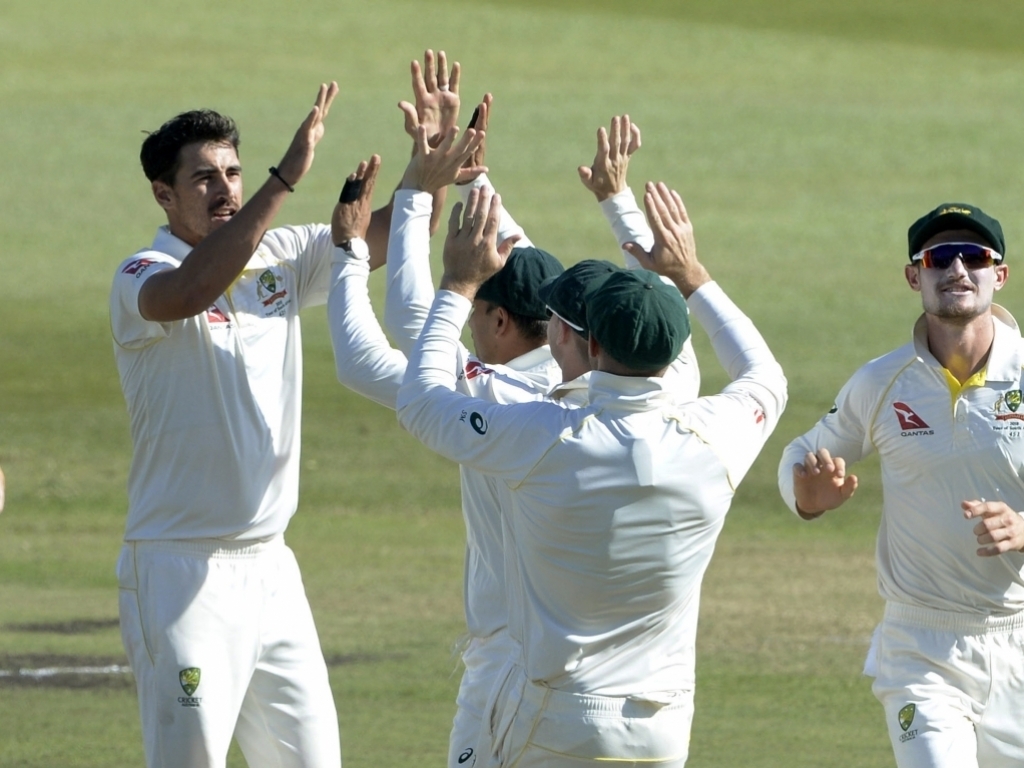 Australia are well on top after the second day of the first Test against Proteas in Durban after bowling the hosts out for just 162 in the first innings for a healthy lead of 189 after the visitors were dismissed 351 earlier in the day.

It was left-arm paceman Mitchell Starc, with figures of 5-34 in 10.4 overs, that ripped through the Proteas batting line-up with clinical reverse-swing bowling.

Off-spinner Nathan Lyon started the rout after he picked up two wickets in his first over.

The home side made a solid start and reached 27 without loss until Lyon turned things around when he came to bowl in the eighth over.

He first had Dean Elgar (7) caught and bowled and then, three balls later, Hashim Amla (0) prodded one straight to Cameron Bancroft at short-leg.

Aiden Markram looked good as he made his way to 32 but Pat Cummins removed the young opener to leave the Proteas in early trouble at 55/3 as the teams when to the tea interval.

After the break Faf du Plessis and AB de Villiers added 37 for the fourth wicket but the captain was undone by Starc as he edged one to wicketkeeper Tim Paine for 15 and Theunis de Bruyn (6) did last long either, undone by the same bowler/keeper combination.

South Africa desperately needed a big partnership, and someone to stand with De Villiers who looked like he was playing on a completely different pitch as he went to his fifty off 81 balls.

Quinton de Kock briefly threatened to come out of a batting slump that was so evident against India as he played some crisp strokes on his way to 20 before Lyon bowled the left-hander.

After that it was the Starc show, as he cleaned up the tail dismissing Vernon Philander (8), Keshav Maharaj (0) and Morne Morkel (0) quickly to wrap up the innings and his ninth ‘fifer’ in Test cricket.

De Villiers, 71 not out, was left stranded at the other end as he watched wickets tumble on a slow pitch that is already spinning and offering reverse-swing.

Earlier, Australia did well to be bowled out in the second session after resuming the day on 225/5.

Mitchell Marsh was the star for the Aussies as he struck a fabulous 96 while he got some good lower-order support from Starc (35 off 25 balls).

Proteas left-arm spinner Maharaj, playing his first Test at his Kingsmead home ground, took 5-123 in 33.4 over. His fourth five-wicket haul in just his 17th Test.

Maharaj and De Villiers were the only positives for the hosts on a terrible day of Test cricket for them in Durban.