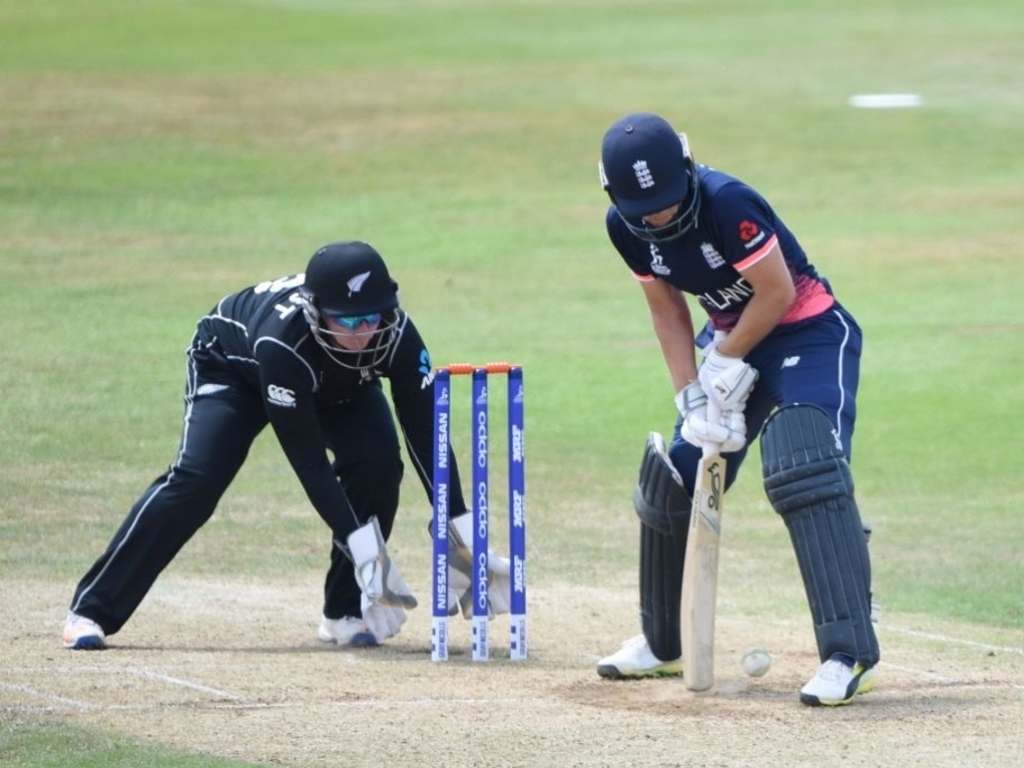 A crowd of 2273 at County Ground in Derby on a sunny Wednesday watched with great delight as Natalie Sciver and Tammy Beaumont set up England’s 75-run win over New Zealand and take the ICC Women’s World Cup 2017 host into the semi-finals.

England arrived in the city for its penultimate league game on the back of a thrilling three-run win over Australia in Bristol. Mark Robinson, the coach, said at the pre-match press conference that the issue of being exhausted both emotionally and physically after a draining victory had been discussed in the team meeting, but he had urged his players to be mentally strong in the business end of the tournament.

Sciver (129 in 111 balls) and Beaumont (93 in 102 balls) were as fresh as anyone could be during their 170-run stand, playing sweeps, paddle sweeps, scoops, reverse sweeps and a range of other strokes with complete authority.

After England posted 284 for 9, Alex Hartley, the spin hero from the win against Australia, and Laura Marsh, one of the two changes England made to the team, removed Suzie Bates and Amy Satterthwaite in the space of less than four overs to derail New Zealand’s pursuit.

They were dismissed for 209 in 46.3 overs, with Hartley finishing with 3 for 44. Anya Shrubsole and Jenny Gunn picked up two wickets each.

England, Australia and South Africa have become the first three teams to qualify for the semi-finals with the winner of India v New Zealand in Derby on July 15 to complete the line-up.

England has been playing exceptionally well since its loss to India on the opening day of the tournament and Sciver has been the face of the revival.

She was not allowed to get going right from the onset as England was reduced to 52 for 3 before the 14th over. Showing maturity, she took her time, but neither Sciver nor Beaumont ever lost an opportunity to punish the bad balls in the first half of their huge stand.

The release came when the leg-spin duo of Amelia Kerr and Erin Bermingham operated in tandem. They failed to pitch in the right areas which allowed the fourth-wicket pair to collect easy runs as they used their feet and toyed with the field.

With the pitch offering no assistance for the seamers once the ball got old, Bates’ options became limited. Barring Leigh Kasperek, who had tidy returns of 2 for 49, there was not much help on offer.

As superbly as Sciver played, Beaumont’s fearlessness – even as she saw Lauren Winfield, Sarah Taylor and Heather Knight fall – nullified New Zealand’s early advantage after England won the toss. Over-pitched deliveries and short balls were punished with equal force, as England took its rate beyond four runs an over in the 18th and never allowed it drop after that.

They built the innings in blocks from there, as the focus shifted from consolidation to innovation to entertainment.

The duo ran 12 twos, two threes and 72 singles in their partnership of 27.1 overs before Beaumont fell against the run of play, just seven short of her second century of the tournament.

The purpose England showed in scoring 48 runs in the batting Power Play set the tone for a late-order onslaught, but Kerr, who took 4 for 51, triggered a collapse.

As a team that takes pride in playing complete cricket, England would be disappointed for not having crossed the 300-run mark.

The third-best score of the innings was Winfield’s 11. It is an area Robinson would want to address ahead of the knockouts.

New Zealand could have bowled England out had they not dropped a catch off the last ball of the innings, but their fightback was the biggest takeaway apart from the good start with the ball.

There were doubts about Sophie Devine’s availability after she suffered a side strain, so the onus was on Bates and Rachel Priest to provide a flying start to record the highest-ever successful chase in World Cups.

Priest, after three fours, was bowled by Shrubsole, and when the spinners were introduced in the 11th over that the game moved rapidly in England’s favour.

Bates and Satterthwaite added 75 at a good pace, but with such a big target they needed support from the rest, which came only from Katie Martin's unbeaten 43. Once Taylor had Bates smartly stumped, and Satterthwaite played against the turn to be caught and bowled, the writing was on the wall. Slowly but steadily things are adding up for England to cap a memorable summer at Lord’s by winning a home World Cup for the third time.