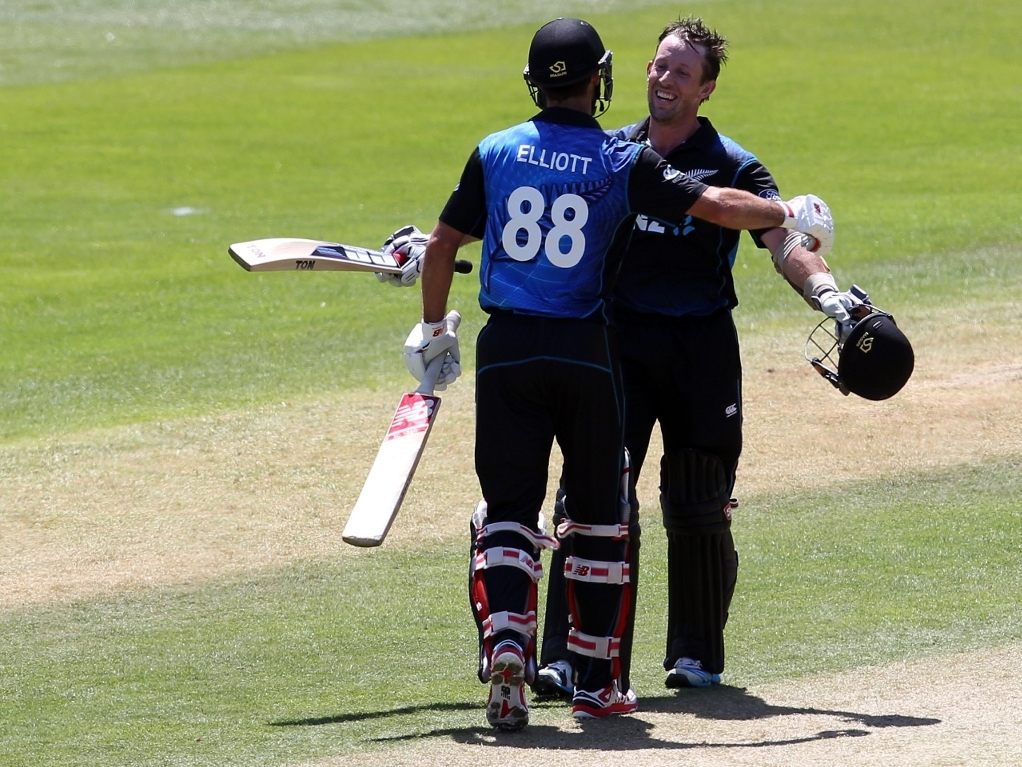 A stunning record-breaking sixth-wicket stand between Luke Ronchi and Grant Elliott was chiefly responsible for New Zealand's lopsided 108 run win against Sri Lanka in the fifth ODI at the University Oval in Dunedin on Friday.

Wicketkeeper Ronchi and allrounder Elliott came together with the Black Caps in a spot of bother at 93 for five after 20 over, but by the end of 50 overs had put on unbeaten 267 in 180 balls. Ronchi finished unbeaten on 170 and Elliott was 104 not out as Sri Lanka players looked completely shell-shocked at the end of the innings.

The day had started so well for the visitors, almost perfectly, as they got the wicket of opener Martin Guptill with the first ball of the match, caught by wicketkeeper Kumar Sangakkara off Nuwan Kulasekara. New Zealand captain Brendon McCullum and the inform Kane Williamson then set about to rebuild the innings with a 50 run stand for the second wicket.

The home side then lost four wickets relatively quickly, first McCullum went for 25, lbw to Kulasekara, despite using up a review then Williamson was caught behind off Thisara Perera for 26. Ross Taylor continued to struggle for form, reaching 20 before he fell to the part-time bowling of the visitors stand-in captain Lahiru Thirimanne.

When Thirimanne got Corey Anderson to play down the wrong line and trap him in front lbw for eight, Sri Lanka must have believed that they were on top and ahead of the game at that stage. Elliott and Ronchi however firstly steadied the innings, then counter-attacked and thereafter it was just a full-out attacking assault as they royally entertained a sold-out crowd in Dunedin as New Zealand posted a commanding 360 for five in their 50 overs.

Chasing a mammoth total, Sri Lanka got off to a quick start with Thirimanne and Tillakaratne Dilshan putting 93 for the first wicket inside 20 overs. One of the batting heroes Elliot made the breakthrough having Thirimanne caught for 45. Sri Lanka needed a big partnership, but every time something was threatening to happen the hosts would quash the threat.

Sangakkara, having put on 48 with Dilshan fell to Elliot and Mahela Jayawardene, after adding 70 with Dilshan for the third wicket, was bowled by Trent Boult for 30. Thereafter wickets fell at regular intervals, Dilshan was the only batsman to show any fight, taking the attack to the Black Caps bowlers, scoring a gutsy 116 in 106 balls, before he was out in the 36th over of the innings as Sri Lanka crumbled to 252 all out in the 44th over.

New Zealand go 3-1 up with two matches to play in the seven-match series, after the previous match at Eden Park in Auckland was washed out.