Sunday July 14: The day that cricket decided to come home 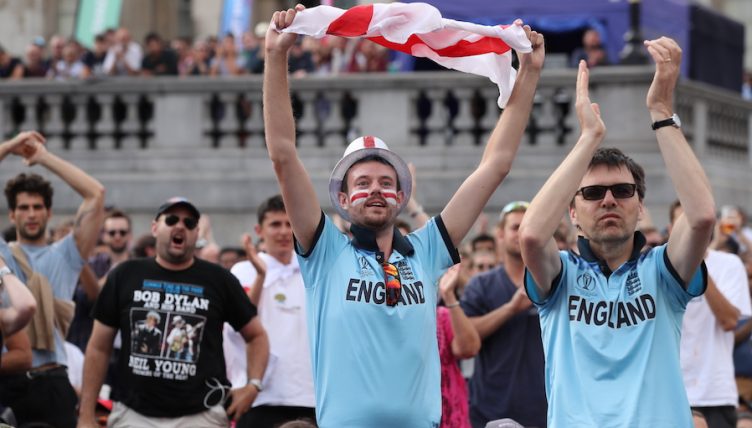 It’s strange to think there are actually people, real human beings, who dislike cricket. It is a sport which over multiple formats and, in some cases, across multiple days encapsulates a tapestry of emotion that even Shakespeare would be proud to pen.

Even after some time to ponder and reflect upon Sunday’s events it is still incredibly difficult to know where to start with trying to do a game like that justice, let alone describe the experience of being there.

From the moment my Dad told me that we had tickets for the Lord’s showpiece after the semi-final win over Australia to sitting here on a Monday morning, it is still hard to believe that this is reality and not some kind of videogame/dream hybrid.

Those four words on their own evoke a ridiculous amount of meaning; the idea of ending decades of struggle and overcoming a plethora of mental obstacles to finally lift the trophy, but those words are simply a means to an end.

Perhaps one of the beauties of this great sport is that there are rollercoasters within rollercoasters; ebbs and flows in both the bigger picture – which started 47 days and 47 games ago – and games themselves. If the previous ten games of England’s tournament had been akin to the Big Dipper (Blackpool Pleasure Beach, google it) then the nine hours on Sunday was the Kingda Ka.

Lord’s was of course a fitting venue. The Home of Cricket within the home of cricket hosting, a Mecca of sorts in sporting terms, however such was the heightened emotion heading into the final that a defeat for Eoin Morgan’s side could have been likened to watching the fall of Rome.

But the gladiators were ready, and as a gentle hum at 9:30am developed into an almost deafening buzz of anticipation, the stage was set for battle. The crowd were ready to either see their dreams dashed or witness the sweetest of successes, with the general feeling that most of the crowd would have happily pressed a button to skip to 6:30pm and find out who the winners were, such were the nerves on display.

Throughout the competition there had been numerous debates about what actually constitutes a good game of One Day International cricket. Is it tracks that produce scores of 350+ and almost take the threat of the ball out of the equation, or is it the slower pitches that can often make for a fascinating and even contest.

What we saw on Sunday was very much the latter, and you’d be hard pushed to find anybody who found it boring.

New Zealand were steady in their progress to begin with after Kane Williamson had won the toss and elected to bat; with the captain partnering Nicholls well after Woakes had removed Guptill.

As the runs ticked along for the Blackcaps the restlessness grew among the home contingent in NW8. This wasn’t the England they wanted nor expected to see; the aggression had been replaced by caution, perhaps understandably so given the size of the occasion.

Step forward Liam Plunkett. The Middlesbrough-born middle-over specialist bowled an outstanding spell to help remove the aforementioned duo and the cauldron began to bubble. England were wrestling back control.

Wickets continued to fall at semi-regular intervals but in all truth there wasn’t a period where England were rampant with the ball, and the Kiwis smartly pushed and prodded their way around the Lord’s outfield to set themselves a nice platform.

The last 10 overs of the New Zealand innings were absolutely key and the crowd knew it. The buzz subsided into almost silent anticipation, everyone watching with baited breath, and the three wickets inside that period were greeted with alcohol-fuelled explosions of emotion.

England knew their task: 242 to become 50-over champions of the world for the first time ever. During the interval the mood among spectators seemed surprisingly upbeat, surely they weren’t going to fall into the trap of assuming it would be a doddle? Had the gut-wrenching defeat to SrI Lanka at Headingley taught them nothing? Perhaps memories of cruising to victory over Australia were a little too fresh.

Some 90 minutes and 23.1 overs later, most heads were in hands. England were faltering massively at 86-4, with captain Morgan heading back to the pavilion knowing the hopes of a nation now rested in the hands of others.

Inspiration often comes from unexpected sources, though in this case it perhaps came from the most predictable of places: Ben Stokes. Ironically born in New Zealand, the ginger Lara begin to claw back hope thanks to a fantastic partnership with Jos Buttler, and the atmosphere began to build once again.

All of the 30,000 capacity crowd were hooked, they knew that run-by-run they were witnessing the passage of time towards a climax that would either be full of pain or pleasure.

In a way, that’s the key difference between a rollercoaster of emotion in cricket and an actual rollercoaster: you know that at the end of the ride you are getting off the latter safely and full of adrenaline, and you want to go again straight away. In cricket you don’t get that. Oh, and it doesn’t take 90 seconds either.

The target got shorter as fingernails did too. 34 off 18, 24 from 12, 15 from six. Perhaps that is over-simplistic, though in truth it felt like the game was going exactly as quickly as the previous sentence was typed.

The innings from England followed a distinct pattern particularly towards the business end, in which the rate required appeared to be slipping away, but a timely boundary alleviated that and made everyone believe again.

And then that moment. As the ball hit Stokes’ bat following a dive to get back, with the sun beaming off the roof of the main stand, it was almost hard to understand what had just happened. Word spread around from those who saw the umpire’s signal, and when the equation ‘England need 3 more runs from 2 balls’ appeared on the scoreboard, everyone spent the next two minutes trying to fathom what they had seen.

Perhaps fittingly given the benefit of hindsight, England could not get over the line in those last two deliveries, which meant we had to do it all over again.

A 10-minute break which consisted of almost total silence in mental preparation for yet more torture, the nation’s eyes glued to screens around the country, and Stokes & Buttler delivered again. As the ball crashed to the boundary twice, particularly the last ball of the over, all that pre-built pressure came out and culminated in an atmosphere like nothing witnessed before at Lord’s.

A magnificent super over saw England on the cusp, surely they couldn’t mess this one up? Jofra Archer to bowl. Wide, one, six. Everything had evaporated, and now it was New Zealand who were in the box seat. Rollercoasters within rollercoasters, and with more twists to come.

The day was almost perfectly encapsulated by the group of six fans sat a row in front, most of them Millwall supporters so typically a hardened bunch. They, like everyone else, mentally disintegrated to the point that a bottle of whiskey one of them had was being passed around.

I managed two glugs before an empty bottle was handed back to him around 60 seconds later. That was a perfect summation; everybody in the stadium just looking for any kind of relief they could possibly find.

They did it. England found a way to do it. The bails were whipped off by Buttler, the players ran off towards third man like a streak of blue lightning, grown men who had never met before were hugging each other with tears in their eyes. It is the closest thing to perfection you could ever possibly want.

Chants erupted, rapturous applause followed, commiserations were offered to crestfallen New Zealand supporters. People began to come to terms with the history that they had just witnessed, and as Frank Skinner had predicted at the half way stage, Morgan lifted the trophy in the Sunday sunset.

Songs continued all the way out of the ground, where the main roads were blocked off as fans danced in the street. Car horns beeped and more embraces between strangers were exchanged. This is perhaps exactly how winning the World Cup on home soil could be imagined, but it’s a completely different proposition to be experiencing that moment.

There is a bigger picture to everything that extends beyond Sunday’s final, such as the potential there to inspire a generation just as the 2005 Ashes did. To have been there for the moment that possibly does is something unforgettable and genuinely life-changing.

Ten hours of pain-staking, heart-breaking, gut-wrenching action, and I wouldn’t change even a single ball.

It was the greatest game of cricket there has ever been, and perhaps ever will be, on the biggest stage of all. It will simply never be forgotten.