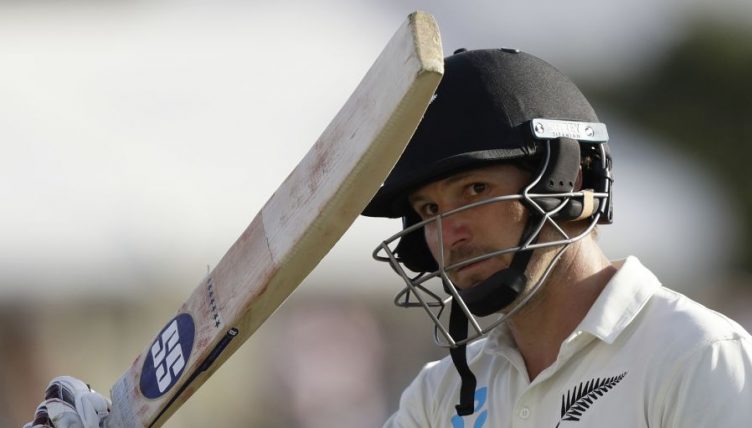 BJ Watling put England’s profligate batting on day two to shame as his tenacious 119 not out inched New Zealand into a first-innings lead while the tourists toiled in the field on the third day of the first Test at Mount Maunganui.

Watling was reprieved on 31 when Ben Stokes shelled a relatively simple chance at slip and the Black Caps wicketkeeper expertly capitalised by battling his way to a circumspect 251-ball hundred – his eighth in Tests.

England were therefore left to rue errors in the field as well as their own carefree failure to compile a truly imposing first-innings total of their own as their 353 all out was steadily overhauled by New Zealand.

The home side lost just two wickets all day and were 41 ahead after closing on 394 for six on a desperately slow surface.

There was precious little movement for England’s bowlers while any variable bounce that had been forecast following the demise of New Zealand captain Kane Williamson late on day two was in desperately short supply.

Jofra Archer peaked at 94.4mph in mid-afternoon but he remains wicketless in his first overseas Test, as only Joe Root and Stokes made inroads into the hosts’ batting line-up on a trying day.

Watling proved immovable, even after bringing up the first Test century at this ground in the late afternoon sunshine to the delight of the home crowd on the grassy banks.

A patient 70-run partnership alongside Henry Nicholls (41) was followed by Watling largely taking a backseat in a 119-run stand with Colin De Grandhomme, who belied the tricky nature of the pitch to amass an enterprising 65.

De Grandhomme also benefited from a drop as Rory Burns spilled a difficult chance, which was compounded when the England opener sustained a small split on his thumb, leading to him being off the field for the rest of the day.

While he is expected to open the batting in England’s second innings, the minor injury was symptomatic of a day in which little went in the tourists’ favour.

They were in the ascendancy following the removal of Williamson but lacked any penetration on the third morning, even though Broad conceded just one run off the bat in his opening five-over spell.

But Nicholls, who passed a concussion test after being struck on the helmet by an Archer bouncer on Friday, and Watling studiously eliminated any risks as they took only 26 runs in the opening hour.

Only when Root introduced himself did the New Zealand pair look uncomfortable.

Watling edged the England captain’s second ball to first slip, only for Stokes put down a waist-high chance. But Nicholls perished two balls later when he played down the wrong line and was trapped plumb in front.

That was pretty much as good as it got for England as De Grandhomme was allowed to settle into stride, with Root and frontline spinner Jack Leach unable to exert any pressure.

Any hope England had of prospering with the new ball after lunch – taken in the 84th over – was quickly snuffed out by an unwavering Watling and the more ambitious De Grandhomme.

The big-hitting all-rounder was unafraid to take on Archer’s sharp blast, hooking the paceman for six en route to a 73-ball fifty – fewer than half the 149 balls Watling took to reach the mark.

De Grandhomme was dropped on 62 in the gully by Burns off the willing Sam Curran, but the batsman added only three to his tally before succumbing to the first ball after tea.

Stokes had strangely not been called upon to bowl in the afternoon, although there was an element of fortune to his success as De Grandhomme slapped a long hop to gully, where Dom Sibley took an outstanding low catch diving to his right.

Mitch Santner was initially uncomfortable under a short-ball barrage from Stokes but gradually warmed to his task as Watling closed in on a century, which he brought up with a clip to mid-on and a scurried single.

It was Watling’s second Test hundred against England, having underpinned their famous Headingley win four years ago, and his latest effort has lifted them into a position of strength.

Archer thought he had his man when Watling was given out lbw on 113 but a review highlighted an inside edge, meaning he survived to the close, alongside Santner, who contributed an unbeaten 31 in unbroken 78-run union.