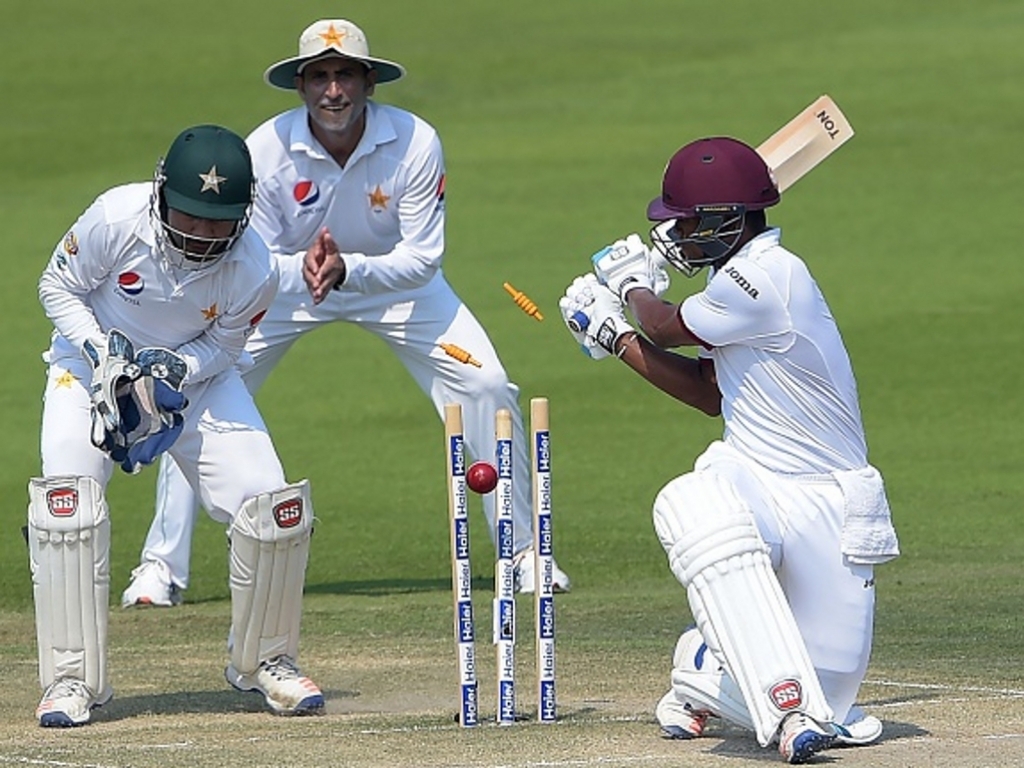 Pakistan are on the brink of clinching their Test series against the West Indies after a dominant display on day four of the second Test.

The hosts ended the day needing just 6 wickets to take the second Test and claim an unbeatable 2-0 lead in the three match series.

Pakistan resumed play on day four at 114 for 1 and seemed to have settled on a lunchtime declaration even before play got underway.

The world number two Test side gathered 113 runs in the morning session and trundled along at just over four an over losing only Azhar Ali (79) along the way.

The loose shot that preceded Azhar’s departure was most likely a result of Pakistan simply trying to get on with things to ensure they get the result they deserve after dominating the men from the Caribbean for the bulk of this Test.

Asad Shafiq (58 not out) and Younis Khan (29 not out) would take Pakistan to lunch and the declaration at 227 for 2 leaving the West Indies chasing 455 to win.

Miguel Cummins and Shannon Gabriel each picked up one wicket in the Pakistan innings.

The West Indies needed to be steadfast in their resistance to give themselves a chance of saving the Test but lost two wickets before tea as they managed to reach 86 for 2 in the afternoon session.

Leon Johnson (9) was the first to go when he tried to sweep a quicker one from Yasir Shah only to have his middle stump pegged back.

Darren Bravo (13) became only the seventh overseas batsman this century to score 1000 runs against spinners in Asia before he became Rahat Ali’s 52nd Test victim with a loose shot.

Kraigg Brathwaite and Marlon Samuels managed to dig in and get the Windies to tea without any further damage being done.

Wickets continued to fall in the evening session as the West Indies moved to 171 for 4 by the close of play.

Samuels (23) was the first to go after tea as he chipped a full delivery from Yasir straight back to the leg spinner, any thought of it being a bump ball was quickly dispelled by the replays and the veteran’s 61 ball vigil was at an end.

Brathwaite (67) survived an initial appeal for leg before off the bowling of Mohammad Nawaz but skipper Misbah chose to review and the replays damned the Barbadian as Pakistan inched closer to victory.

Roston Chase (17 not out) and Jermaine Blackwood (41 not out) would put on an unbeaten stand of 47 to take the West Indies to the close with six wickets in hand and a slender hope of salvaging a draw.

Yasir Shah was the pick of Pakistan’s bowlers claiming 2 for 60.