Pakistan spun out on eventful first day in Abu Dhabi 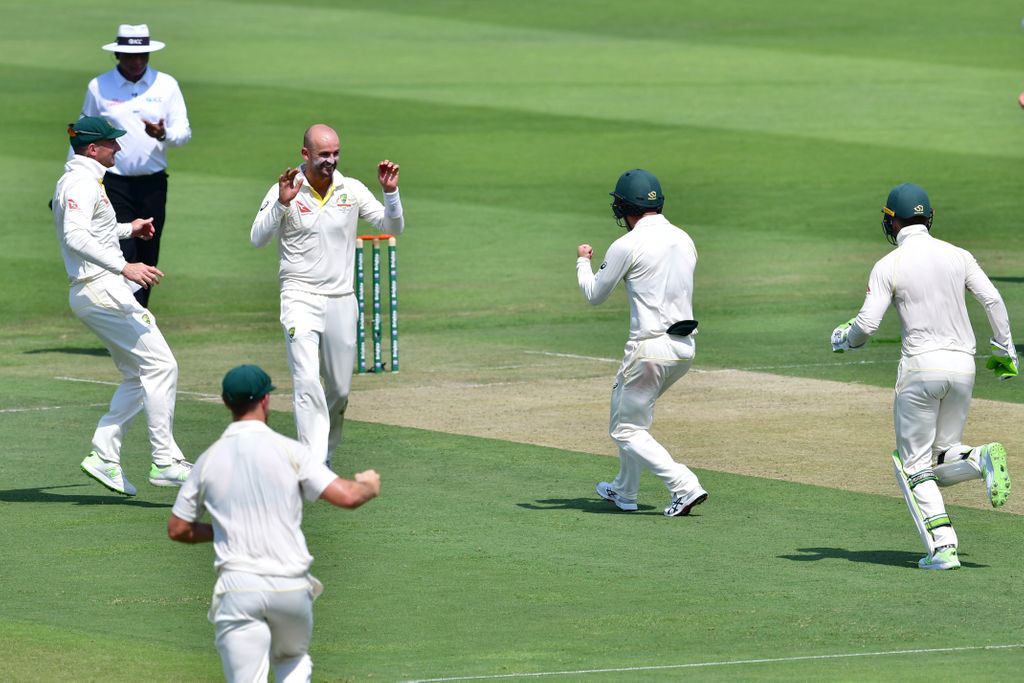 Australia lost two late wickets after Pakistan were spun out on an eventful first day of the second and final Test in Abu Dhabi on Tuesday.

Pakistan, who opted to bat first after winning the toss, recovered from 57/5 to post 282 all out thanks mainly to debutant opening batsman Fakhar Zaman and his captain Sarfraz Ahmed, who both hit scores of 94.

The duo came together before lunch after Australia spinner Nathan Lyon had taken four wickets in six balls in the morning session to leave Pakistan reeling.

Paceman Mitchell Starc had opener Mohammad Hafeez (4) caught sharply at short-leg by Marnus Labuschagne in the third over.

Fakhar then combined with Azhar Ali (15) for a 52-run stand for the second wicket before Lyon turned the tables half and hour before the lunch break.

The off-spinner first had Azhar chip one straight back at him and then had Haris Sohail, who scored his maiden century in the first Test, caught by Travis Head at silly point the very next delivery.

In his next over Lyon got Asad Shafiq and Babar Azam in the space of four balls, both for ducks, as Pakistan lost fours wickets for the addition of no runs.

Despite the carnage at the other end, Fakhar was going about his business calmly and went to lunch on 49 not out and his team’s total on 77/5.

Fakhar and especially his skipper Sarfraz looked to counter-attack after the interval and the duo played well for almost the entire session but Labuschagne, with his part-time leg-spinners, struck the crucial blow when he had Fakhar lbw on the stroke of tea.

With the 147-run partnership broken and just the bowlers still to bat, Australia looked to wrap up the innings after the interval.

Bilal Asif (12) was caught behind off Labuschagne while Sarfraz threw away a century as he skied the South Africa-born Australian to cover going for a big hit to bring up his century.

Yasir Shah (28) and Mohammad Abbas (10) made small contributions but Pakistan were bowled out in 81 overs with Lyon ending with figures of 4-78 and Labuschagne 3-45.

Abbas got rid of Usman Khawaja (3) and nightwatchman Peter Siddle (4) with the last ball of the day as Pakistan would end the day on a high note.

At 20/2 Australia will look to their middle-order to pile on the runs on the second day and take a big lead in the first innings.