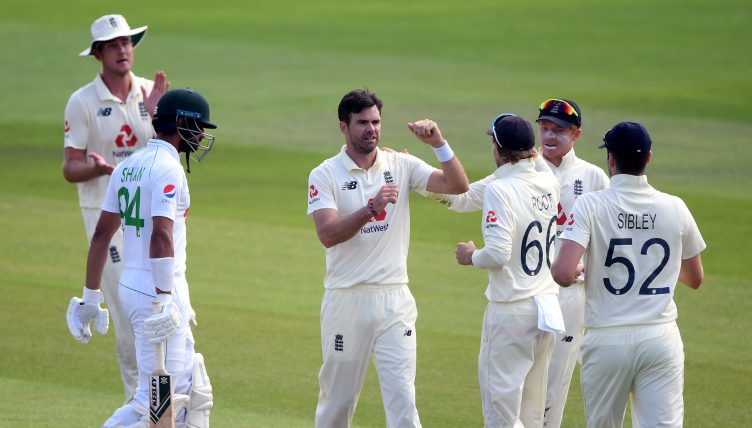 James Anderson made an early breakthrough to repay England’s faith in the second Test against Pakistan, but poor work in the slip cordon spared the tourists further losses before lunch.

Anderson dismissed Shan Masood with his eighth ball of the day, equalling his match haul from a disappointing outing in last week’s series opener in Manchester, but Pakistan reached 62 for one before a passing shower ended the session early.

Opener Abid Ali can consider himself fortunate to reach the interval on two counts, put down on one and 21 as Dom Sibley and Rory Burns dropped straightforward chances.

Captain Azhar Ali also had a moment of good fortune when a ball from Chris Woakes ricocheted against the stumps without dislodging a bail.

England made two changes to their side, Zak Crawley in for the absent Ben Stokes and all-rounder Sam Curran picked ahead of Jofra Archer on account of his superior batting.

Anderson took the new ball looking to prove he was ready to relocate his best form after a challenging summer to date and the 38-year-old did not need long to get the better of Masood.

The left-hander batted eight hours for 156 in his first innings at Emirates Old Trafford but barely bothered the time-keeper here, shuffling across the crease and pinned lbw by the perfect amount of inswing.

Stuart Broad should have been celebrating similarly in the very next over when Abid sprayed a chance to third slip, reprieved when Sibley moved to his left and juggled a chance.

Broad called for an inhaler midway through his spell, with the muggy conditions activating his asthma, but he was not unduly affected and later returned for a second stint.

Woakes, man-of-the-match for his efforts with bat and ball last time out, replaced him and was halfway through his celebration after his second ball clipped Azhar’s inside edge and squeezed between the pads. The ball did roll up against the stumps but not hard enough to send him on his way for seven.

Woakes’ luck was even worse when Abid played him with hard hands straight to second slip, where Burns fumbled at neck height.

The second-wicket pair knuckled down to make the most of their extra lives, Azhar’s square cut off the returning Anderson the best shot of the morning.

Curran’s five overs cost just 11 runs but looked a little polite compared to what Archer or Mark Wood, who was not considered 100 per cent fit, might have offered.