No one sensible would doubt ‘world-class’ James Anderson – Sam Curran 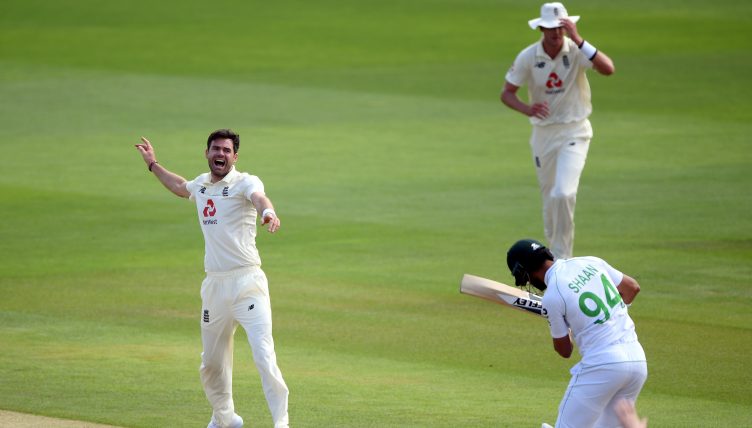 Sam Curran felt James Anderson removed any doubt about his ability to continue performing at “world class” levels as England’s seamers left Pakistan in trouble at the start of the second Test.

Rather than sweep aside criticism of his performance in last week’s series opener in Manchester, the most prolific paceman in Test history admitted that he had slipped below his usual high standards and asked for the chance to put things right at the Ageas Bowl.

Having been granted the opportunity, Anderson took care of his side of the deal, helping reduce the tourists to an under-powered score of 126 for five on a rain-shortened first day.

The 38-year-old’s share of that was two for 35 from 15 overs, taking his career mark to 592 and kicking the idea of his own retirement a little further into the long grass by seeing off Shan Masood and Azhar Ali.

“Really, I was pretty shocked with all the stuff that was going on about him. He’s obviously a world-class bowler and anyone who doubts him isn’t very sensible,” said Curran.

“He showed his class. I’m sure he’ll go on to get his five-for and then hopefully creep up to 600. I’m just enjoying having him around and learning from him. He was out there helping me through my spells and picking his brains is great for me. It helps having Jimmy out there.”

Curran, Stuart Broad and Chris Woakes all followed Anderson’s lead with breakthroughs in a productive evening session that lasted less than an hour before lightning, rain and bad light combined to bring an early close but turned a good start into a commanding one.

Curran was the man to remove top-scorer Abid Ali for 60, finding the edge with a hint of extra bounce outside off stump, a handy contribution for a player who owed his selection in large part to his ability with the bat.

Ben Stokes’ absence on family matters persuaded Joe Root to go with the all-rounder ahead of Jofra Archer, Ollie Robinson or the recovering Mark Wood and Curran was eager to make the most of his chance having spent three of the last four games out of the side.

While that would usually lead to a spell back in the ranks with Surrey, this year it has meant a frustrating stint as a front-row spectator inside the bio-secure bubble.

“I think it was a pretty late call, I found out this morning but Rooty did come to see me last night and said there was a high chance I might be playing,” he said.

“It’s nice to be back in the side. It’s a tricky situation when you don’t play I guess. You don’t get to go and perform for your county; you don’t get selected and you’re back to your hotel room. Things like that are very difficult.

“But we’ve got such a great squad at the minute, we’re gelling together really nice and the boys are lifting the guys that are not playing and keeping them involved.”