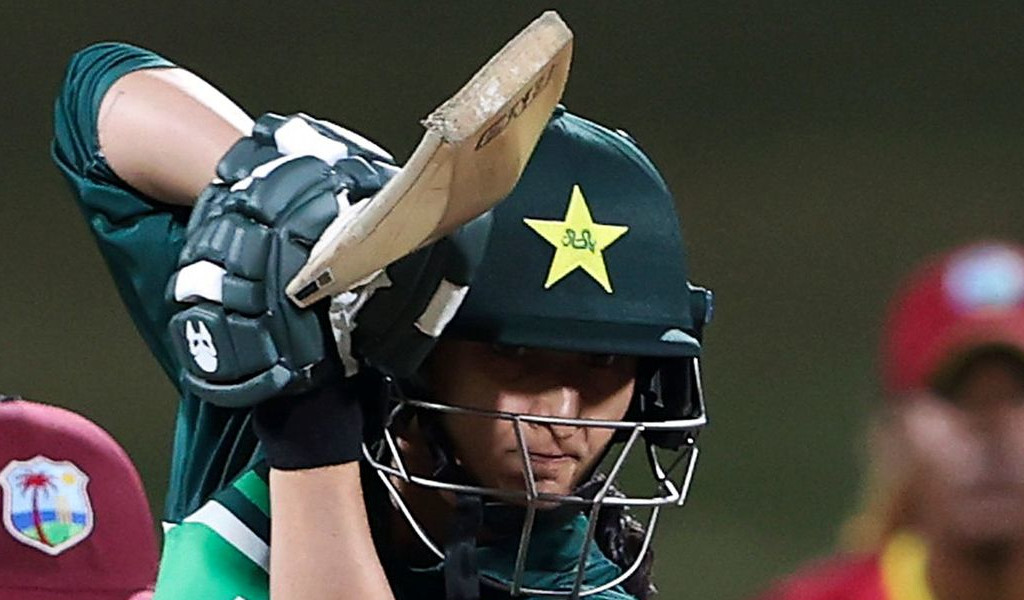 Pakistan beat the West Indies by eight wickets to earn a first ICC Women’s World Cup victory since 2009 with a complete all-round performance.

The West Indies were restricted to 89 from their 20 overs in a rain-shortened match as off-spinner Nida Dar took the best figures for Pakistan in a World Cup with four for 10, helping end an 18-match losing streak in the tournament.

The last time Pakistan had won a match in the ICC Women’s World Cup was also against the West Indies.

The West Indies remain third on the points table with six points but have played six matches with only one more league match to go against South Africa on Thursday. Australia have already qualified with five straight wins while South Africa are second having won all their four matches so far. India, England and New Zealand are on four points each.

Left-handed opener Muneeba Ali set up Pakistan’s run chase perfectly as the West Indies’ chances of qualifying for the semifinals suffered a bump. Muneeba, playing for the first time in the tournament, scored a brisk 37 and Omaima Sohail hit the winning runs much to the delight of her team-mates.

The match got underway five hours later than scheduled after a herculean effort from the ground staff to clear the standing water, with Pakistan winning the toss and choosing to bowl.

Diana Baig was targeted by Deandra Dottin, who took four fours off her in her first two overs, but Dottin did not have the same joy against Anam Amin, who conceded just six off her four.

The West Indies’ leading run-scorer Hayley Matthews never got going as she was dismissed for one from seven balls off the bowling of Fatima Sana, Muneeba taking a good catch at backward point.

Stafanie Taylor survived being dropped on nought but failed to find the boundary like Dottin, whose dismissal also signalled the end of the West Indies’ attacking intent.

The first of Nida’s wickets was a crucial one as she held a low return catch to dismiss Dottin for 27 off 35 balls, before having Shemaine Campbelle stumped for seven to reduce the Windies to 46 for three with eight overs remaining.

Pakistan kept chipping away with wickets at vital times, Omaima clean bowling Chedean Nation for a duck before Nida finished her record-breaking spell in style, dismissing Kycia Knight and Chinelle Henry in successive deliveries – Aliya Riaz taking two attempts at holding on to a catch on the long-on boundary to account for the latter.

Nashra completed a team hat-trick as Taylor fell from the next ball of the innings, the captain departing for 18 runs from 31 deliveries, as Nashra took the catch.

A big finish but a modest total

Afy Fletcher finished with a flourish, hitting back-to-back boundaries off Nashra as the Maroon Warriors searched for a competitive total.

They ended on 89 for seven after 23 runs from the final two overs, though Pakistan sat safe in the knowledge that they had chased down 124 against the Windies in the ICC Women’s T20 World Cup 2020.

Matthews started the defence with a maiden before being struck for back-to-back boundaries as Pakistan ended the four-over powerplay with 17 runs, two behind where the West Indies had been at the same stage.

Sidra Amin, Pakistan’s centurion in the loss to Bangladesh, was the first to fall as she was bowled by Fletcher bowled her, spin continuing to do the damage in Hamilton.

Muneeba, in her first World Cup game, matched her captain and batting partner Bismah Maroof for energy and composure as the pair rotated the strike expertly.

A lapse in judgement saw Muneeba dismissed as having survived both a dropped catch and a run out chance off the previous ball, was caught by Dottin mistiming a big swing.

Shakera Selman claimed the wicket as the opener was forced to depart for 37 from 43 balls, bringing an end to the 35-run partnership to leave Pakistan needing 33 runs in 46 balls.

Bismah remained until the end and was there to celebrate with Omaima as she hit the winning runs to end 13 years of drought.