Home Countries Proteas just about on top after Pandya heroics

Proteas just about on top after Pandya heroics 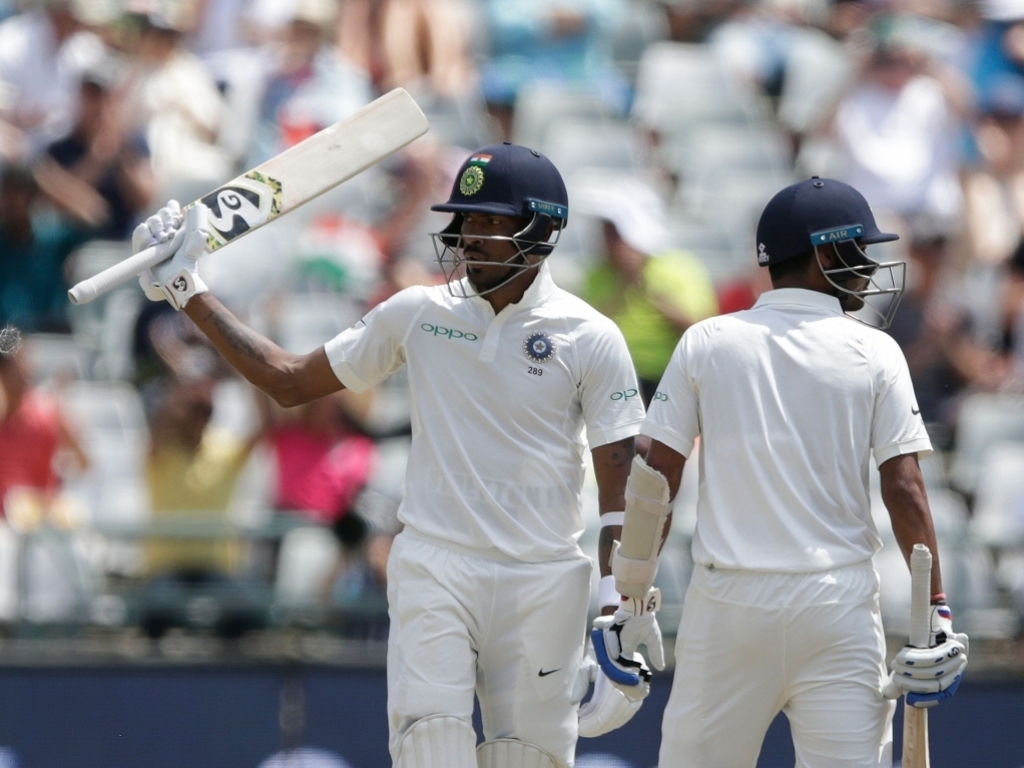 Hardik Pandya top-scored and then took two wickets late in the day to keep India in the contest at stumps on the second day of the first Test against South Africa at Newlands.

Pandya (93 off 95 deliveries) led an inspired counter-attack that rescued India from 92/7 and helped his side to 209 all out, which was still 77 runs shy of of the home team’s first innings total of 286 but it certainly brought the visitors back into a game that was slipping away from their sights.

India started the day on 28/3 and, knowing that things would be easier as the pitch dried out and the hard ball softened, their batsmen went about their business with the utmost of care.

Rohit Sharma (11 off 59) was out lbw to Kagiso Rabada (3-34) in the opening session, during which India managed only 48 runs in 25 overs as they played for time.

The strategy did not reap rewards, for Cheteshwar Pujara (26 off 92) nicked off trying to cut a short wide delivery from Vernon Philander (3-33) the very first ball after lunch.

Ravi Ashwin (12 off 31) only lasted a few minutes longer before he too edged a probing delivery from Philander.

When Wriddhiman Saha then fell for a duck, India’s campaign was in an utter mess.

As AB de Villiers had done in the first dig, Pandya showed that attack can be the best form of defence as he took on the Proteas bowlers and hit them off their lengths, even charging down the wicket to Philander and clubbing the ball through mid-wicket to the boundary.

The gamble paid off despite the fact that, like de Villiers, he had some luck along the way, most notably when he was dropped by Dean Elgar when only 15 had been attributed to his name.

The Proteas have something of a reputation for failing to administer the final blow when the opposition is well and truly under the pump and today proved no exception as Pandya and Bhuvneshwar Kumar (25 off 86) added 99 runs for the eighth wicket.

To make matters worse, Dale Steyn left the field just before the tea interval and did not return to it as he went for an x-ray scan ona bruised heel.

It was always going to be risky to play Steyn given his checkered fitness record in recent years but South Africa did opt to play an extra seamer as a provision for exactly this kind of eventuality.

Morne Morkel (2-57) finally broke the partnership when he accounted for Kumar and Rabada soon denied Pandya a second Test century in just his fourth match.

209 all out was sub-par on a Newlands wicket that was much less spicy than it was on the first morning but Pandya’s effort gave India an opportunity to get back into this match.

South Africa’s openers improved greatly on their first innings failures as they each managed strong starts but neither Aiden Markram (34 off 24) or Dean Elgar (25 off 54) was able to convert their efforts into a significant contribution before they succumbed to the bowling of the talismanic Hardik Pandya (2-17).

South Africa are 65/2 at stumps on the second day and will likely sleep more soundly this evening than the visitors, given their 142-run lead.

A lead of 300-odd will make them hot favourites to take the lead in this three-match series.

Unseasonal light rain is forecast throughout much of the day tomorrow and the accompanied cloud cover will add yet another intriguing dimension to the battle between bat and ball at this coveted fixture. Stay tuned to the action.