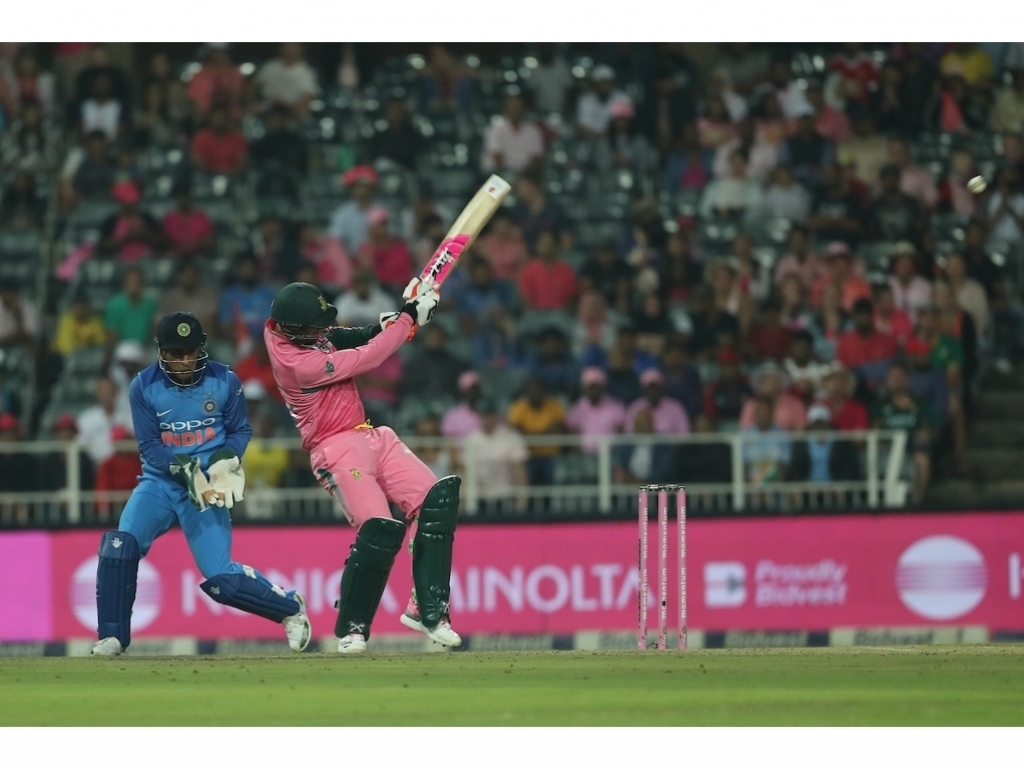 The Proteas quietened their critics with a thrilling five-wicket Duckworth-Lewis win in Johannesburg in the rain-affected fourth ODI.

Virat Kohli won the toss and surprisingly elected to bat first at the Bullring, where evening rain was forecast. AB de Villiers returned for South Africa in the place of Kaya Zondo and Morne Morkel got the nod ahead of spinner Imran Tahir. For India, SS Iyer replaced Kedar Jadav.

The ball seamed and bounced around on a lightning-quick surface and a brilliant caught and bowled by Kagiso Rabada soon saw the back of Rohit Sharma (5).

Shikar Dhawan (109) and Kohli (75) soon got used to the pace and worked skilfully together to see off South Africa’s all-pace attack and then work hard on building a massive partnership, at a good tempo.

The pair managed 158 runs in just 27 overs. It is fair to say that the Proteas were unlucky in the field as edges didn’t go to hand and a ball trickled next to the stumps but credit should be given to the excellent batting of Dhawan and Kohli.

Dhawan’s 13th hundred came in his hundredth ODI, which will be no surprise to anyone who watched his hundred on debut against Australia in Vizag in 2010.

When India’s captain and talisman, Kohli, was caught driving Chris Morris (1-60) on the up, India’s luck began to run out. A break in play of about an hour, due to lightning in the vicinity, heralded a big momentum shift in the game. Dhawan was caught off Morne Morkel (1-55) and then India struggled to put together another significant partnership.

South Africa’s pacemen adopted a successful strategy of aggressive short bowling and, although Dhoni managed a run-a-ball 42 not out, India were never able to get on top of the bowling. At 178 for two after 31 overs one would have fancied a score of well over 300 runs but a concerted effort by the Proteas with the ball in hand kept them to 289 for 7. Rabada (2-58) was particularly impressive at the death as his last five overs conceded only 28 runs.

South Africa began their chase well and neatly notched up 43 without loss after seven overs but, just before another lightning / rain delay, Aiden Markram (22) was out LBW playing across the line to Jasprit Bumrah. He then wasted a review in asking the umpires to have another look at it.

A long delay of 90 minutes or so saw the chase reduced to a 28-over affair. The new target of 202 meant that South Africa required around eight runs an over to get over the line. On the fast Wanderers deck it was always going to be more of a matter of keeping wickets in hand than keeping up with the rate.

The hosts were tentative with the bat after the break. India used their spinners early while the ball was dry and the run rate climbed as Hashim Amla (33) and JP Duminy pushed the ball around. Neither batsman would last much longer as Kuldeep Yadav (2-51) claimed both scalps and the crowd put all their faith in AB de Villiers to save the day. 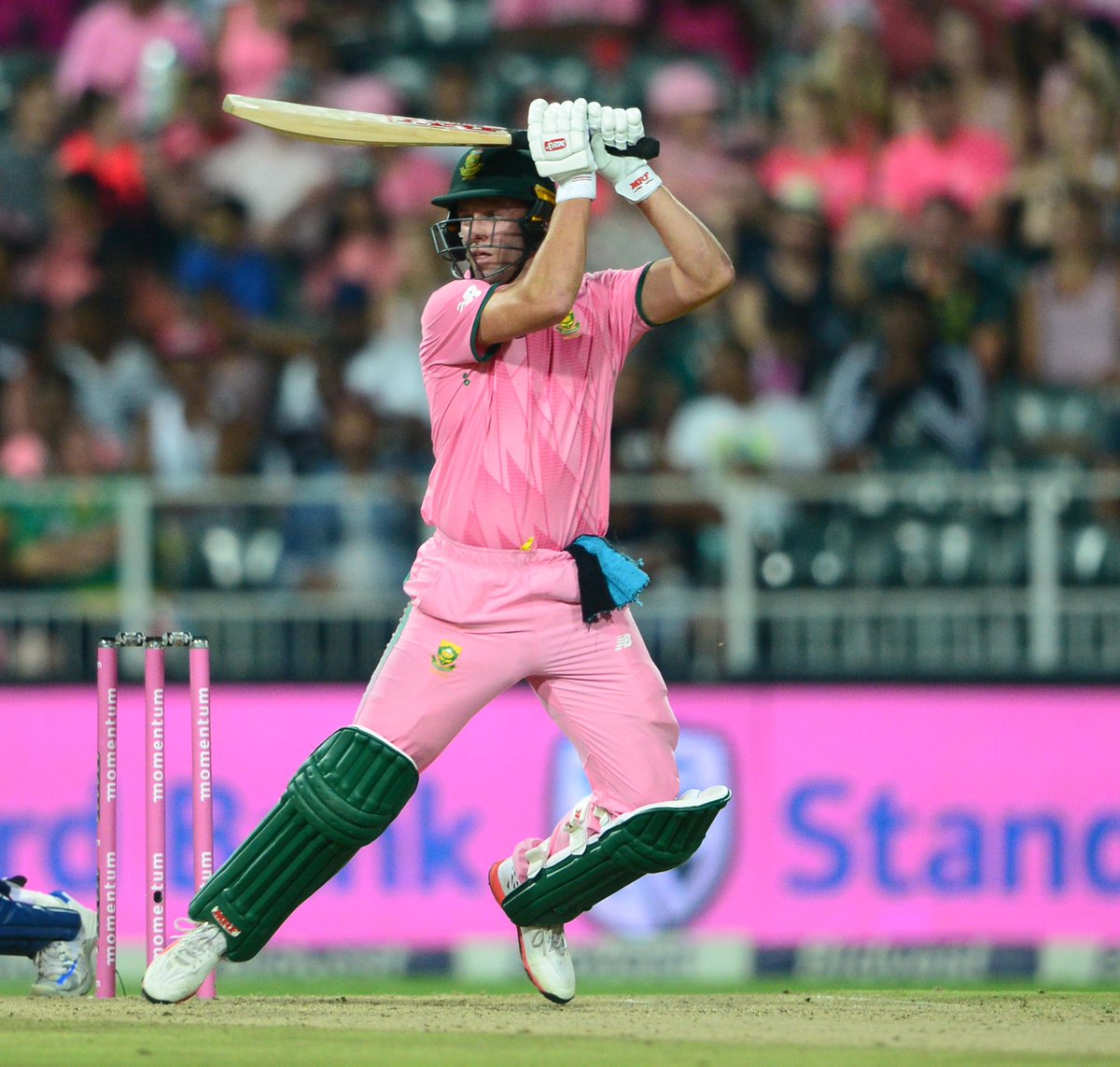 De Villiers had a look at the bowling while the rate required climbed but two consecutive sixes off Yuzvendra Chahal put the chase back on check. His fun ended abruptly the next over, however, when he holed out to fine leg off Hardik Pandya (1-37).

Then Miller was bowled by Chahal to make the score 107 for five and the Proteas were on the ropes but replays showed that the delivery was a no ball and Miller’s survival would prove to be yet another turning point in the match.

From then on out the many who braved the rain at the Wanderers were treated to a spectacle of big hitting that saw the home side get up in style and keep India from winning the series just yet. Miller (39 off 28 balls) was eventually trapped leg before by a legal Chahal delivery but his four fours and two sixes had changed the game.

Klaasen (43 not out off 27 balls) was not shy to improvise and take on the bowlers and his match-winning contribution will not be forgotten by those lucky enough to be in the Johannesburg cauldron.

Phehlukwayo’s 23 not out from five deliveries was the cherry on top as the stadium erupted. South Africa cannot win this series but they have maintained their wonderful Pink ODI record and at least have a chance to draw the series three all, if they can win the remaining two matches.

The sellout series continues at St George’s Park in Port Elizabeth on Tuesday.